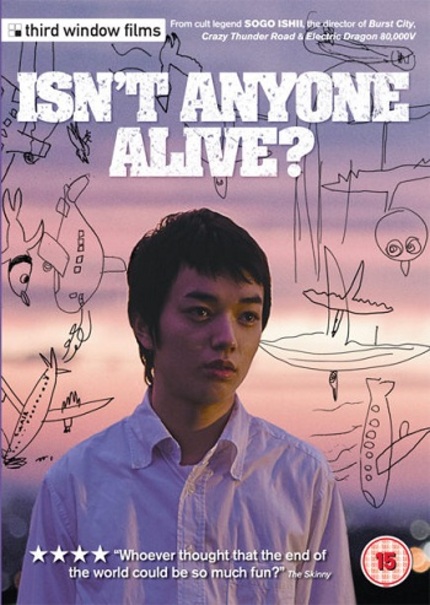 After a lengthy absence, Ishii Sogo returns with a new film. Except, it's not really "Ishii Sogo" that's directing it. Ishii Sogo changed his name to Ishii Gakuryu and should you doubt his intentions, he had very good reasons to do so. Isn't Anyone Alive? (Ikiteru Mono Wa Inainoka) is a great film, but not what you'd expect from a guy who started the Japanese punk genre.

When I heard Ishii Sogo was changing his credit name, I found the move rather dubious. Struggling with your persona is one thing, but going so far as to possibly alienate yourself from a portion of your longtime fans is quite a move. Then again, if you look at the world of music, musicians are doing this all the time. The electronic scene in particular is quite prone to anonymity and it's actually the norm to take on a different identity when releasing music that is slightly different in style or tone.

Finally at ease with Ishii's motives, I still found it difficult to actually sit down and watch this film. Releases in the cyberpunk genre are few and far between and seeing one of the greater directors in the genre head off in a different direction isn't all that comforting. On top of that I had read somewhere that Isn't Anyone Alive? was supposed to be a comedy, not the easiest switch to make for a director who had operated mainly in experimental territory. So when I finally took the plunge I was quite ready to be disappointed.

It took Ishii two whole shots to turn that feeling around. From the first moments of the film you can recognize the hand of a very experienced director, not just switching genres or teams, but trying to invent a new corner of Cinema altogether. Not only is Isn't Anyone Alive? a big step away from Ishii Sogo's previous films, it's a film that doesn't let itself be easily compared to any other films out there. About two minutes in I'd forgotten all about Ishii Sogo and welcomed Ishii Gakuryu to do his thing.

Watching Isn't Anyone Alive? is like watching a film by a first-time director with 30 years of experience in the field. Visually the film is impeccable. Wonderful framing, lovely use of color and some genuine visual artistry. There is none of Ishii's fast editing or crazy camerawork here, instead we get very controlled and punctual scenes with clear remnants of Ishii's Kyoshin experiments. Visually this is on par with what the best Japanese dramas have on offer.

The music is less extreme, but still very purposefully used. There's a certain humor hidden inside the selection of tracks in combination with the unusual timing. The result may come off as a little weird at times, but the effect is spot on and it's nice to see that Ishii carried over his unique musical touch from his previous persona. Don't expect the noize-influenced mayhem from his earlier films and you'll find that Ishii still has a great ear for soundtracks.

The acting too is on a whole other level. Contrary to Ishii's earlier films, Isn't Anyone Alive? is filled to the brim with dialogue. There's hardly a quiet moment to be found with characters rattling weird and inconsequential dialogues at a pretty constant pace. While there are some familiar faces passing by, Ishii clearly fished in a pool of young talent for his cast. It's just one more element that helps him break with his previous style. The acting is solid across the board too, with Shibukawa Kiyohiko stealing many of the film's best moments.

It took me a while to realize what kind of film I was actually watching. The first 20 minutes reveal very little of the film's plot and serve merely as an introduction for the many characters. The following events are quite mysterious and rather definite, something that is not immediately obvious from the rather lighthearted and comfortable atmosphere at the start of the film. Only near the end of Isn't Anyone Alive? does the film reveal its true intentions, making for a pretty good surprise.

While this could definitely be called a comedy, the humor can be quite dry and abstract at times. Most of the humor lies in the combination of timing and conversation subject, something I can't really remember seeing before. I would say that the closest film to compare it with is Tanaka Hiroyuki's Monday, but that's quite a stretch already. It doesn't result in too many loud laughs, but it left me with a constant smile during the entire running time.

If you're a fan of Ishii Sogo, the success of Isn't Anyone Alive? is probably dependent on how quickly you can forget the man's former films. Ishii truly reinvents himself here with a film that's just as unique as his previous work, only very different in tone. It may be more poppy and less experimental, but it's just as incomparable to the work of other directors out there. Approach Isn't Anyone Alive? as a film from a freshman director and let yourself be carried away by Ishii's unique sense of comedy coupled with a strong and mysterious build-up. In the end the man might have changed his name, but it's clear that he can't hide his talent.

Thanks go out to Third Window Films for releasing this little gem on DVD; hopefully it gets the praise it deserves.

According to wikipedia he wrote on his blog in 2010 that he decided to change his name to Gakuryuu already in 2001, and that he wanted to announce it with the release of his next feature after Gojoe, which just didn't happen for a while.

So the name change in itself hardly signals a Mr. Ishii suddenly reborn.

Japanese artists back in the day used to change their names and pseudonyms a lot and for many different reasons. Woodblock print artist Katsushika Hokusai apparently used more than 30 names in his days.

Ishii's been distancing himself from 'cyberpunk' since at least Angel Dust, and only really resurfaced it for Electric Dragon 80.000V. Gojoe has a gonzo ending, but otherwise it's pretty measured stuff. And c'mon, August in the Water and (especially) Labyrinth of Dreams are slow, abstruse art-films.

No wonder the guy wanted to change his name. All his rabid 'fans' seem to distill his 40-year career down to a narrow handful of movies, most of which he made while still in film school almost half a century ago. A considerable majority of his work has *not* been cyberpunk, yet every time he releases a feature, it's viewed as some shocking departure and a 'disservice to his fans.' With fans like that, who needs detractors...