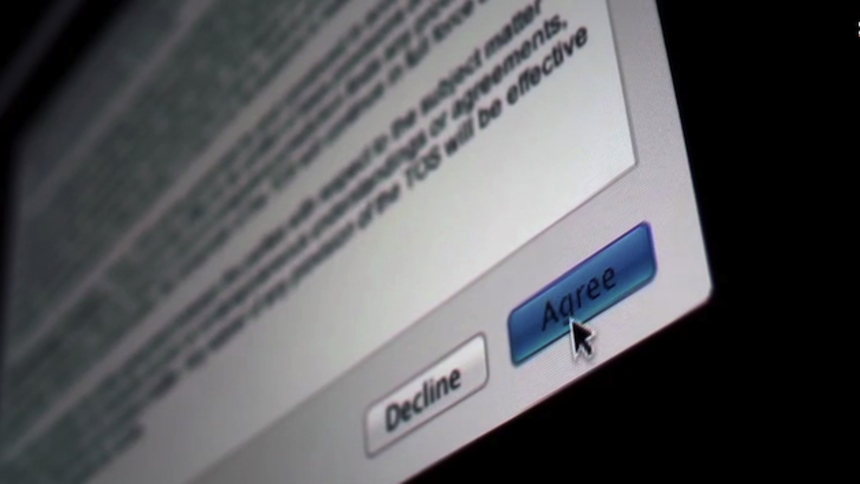 A mere click of the mouse is all it takes for you to strike an almost Faustian bargain with one of the mega corporations on the planet. With that click we get access to fantastic email service, genius music players and easy-to-use photo editors. But what do the companies providing us with these seemingly free services get in return? Or, as director Cullen Hoback promptly asks in his film Terms And Conditions May Apply: " What if privacy policies weren't about protecting privacy but about taking it away?"

Hoback is a documentarin and investigator in the vein of Michael Moore, putting himself front and center in the film as our fluent narrator and guide through what can often be labyrinthine subject matter. Unlike Moore, Hoback is a far more focused presence, without an ounce of snark in him. The brevity of his questions and concerns are not totally lost to grim seriousness as there is a degree of humor to the film, albeit of an almost Orwellian intonation.

The tale he delivers is of the digital age; of our post 9/11 world where a comedian can find an NYC SWAT at his door because he made a bad joke on Facebook, or an anthropology professor in the U.K. can be arrested and detained for merely "thinking about the act of protest". Hoback asks early on in his film: "What if the data collection the patriot act required became a whole new business model, and a whole new foundation of the internet as we know it?" Cleverly illustrating that question and its many follow-ups is a bevy of clips including choice moments from South Park The Lives Of Others, Minority Report and plenty of C-Span (Al Franken included).

In the first half Hobeck focuses on how companies like Google, Apple or Facebook may use the data you provide them, laying the groundwork for an investigation that only blows wide from there. While the film doesn't reveal any truths we may not already know without a little investigation of our own (or understanding of our constitutional rights), it does expertly sync up, contextualize and give us a startling picture of the big picture of our current global climate; at times a history of the moment, in turn an autopsy report on the still oozing corpse of privacy.  Hobeck speaks with senators, attorneys, a VP at Mozilla, musician Moby, author Margaret Atwood and over a dozen technology analysts, consumer advocates, security experts, government whistle blowers and software engineers. He scours for traces of Google's earliest privacy policies, chronicles the demise of online privacy acts post 9/11, chats with Barret Brown the unofficial head of the hacktivist collective Anonymous, and deconstructs the meanings behind data collecting and how the government could use the terms and service agreements we sign with companies to help solidify the state of surveillance we live in. Going further and further down the rabbit hole, coming out the other side it all feels a little less like 1984 and more like Fahrenheit 451. As Sherry Turkle, professor of social studies of business and technology at MIT puts it in the final third of the film: "I am not exactly sure who the us is, but I am very critical of us."

Forgetting filmmaking prowess and perspective, by pure measure of information alone much of what is presented in the film is deeply unnerving stuff. Perhaps almost enough to make one feel powerless, even a fool for signing into Facebook day after day. But Terms and Conditions does not wish to put you in a victim funk and let you stew there. It reminds you that you have a choice. It asks you to be a critically thinking citizen who -- just like Mark Zuckerberg in the film's only, yet brilliant, gorilla journalism moment -- can ask "Can you please stop?"

Deft and tactful in its reporting, Terms And Conditions is a documentary that helps put the power back in the people's hands. It is a must-see at Slamdance and should come out swinging as one of the best docs of the year.

For more information on the film and of the various roles privacy policy can play in our lives, you can visit the film's official site: tacma.net

Do you feel this content is inappropriate or infringes upon your rights? Click here to report it, or see our DMCA policy.
Cullen HobackDocumentaryfacebookmark zuckerbergprivacyslamdanceterms and conditionsBrian LawlerJohn PalfreyHarvey AndersonNews