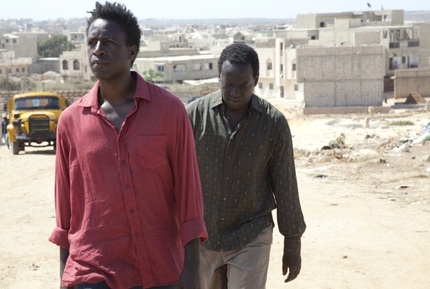 From Ikiru to The Bucket List, there are already a number of movies made about people who find out they have a short time to live. However, I can safely say that none of them are quite like Today (Aujourd'hui). Set in Senegal, director Alain Gomis' meditation on the inevitability of death glides between surrealism, music, tragedy and documentary-like realism, resulting in a unique, touching and surprisingly laid-back film. Though the disparate ingredients occasionally clash and confuse the tone, Today never quite loses footing thanks to the powerful, subdued presence of the very talented slam poet/music artist (and now actor), Saul Williams.

In the film, Satche (Williams) wakes up one day with the knowledge that he has 24 hours to live. The whole city seems to know this too. We're never told how anyone figured this out, and he certainly seems to be physically healthy, but from the first five minutes of the film, it's established as an indisputable fact. However, after waking up, he leaves his room filled with wonder and curiosity, not dread.

According to tradition, his family, exhibiting various levels of grief, surround him and speak about him. At first, they say the things we'd expect a family to say; how he was kind-hearted, how he went to school in America and so on. But suddenly one woman breaks the mood with an insult. Everyone freezes. She explains that, as she understood it, they are supposed to say everything about the soon-to-be deceased, not just the nice things. Immediately, a cavalcade of more insults and shameful accusations from his family ensue.

This scene is just the first example of how Today never unfolds exactly as you'd expect. After this ceremony, we follow Satche through the streets of Senegal, which are gorgeously filmed, as he wanders through his last day on earth. He meets up with friends only to have two of them get in an argument that almost ends in a fist fight. He visits an old flame, which results in a brilliantly staged seduction/humiliation.

And sometimes he just wanders, taking note of the vibrant details in his hometown as the clock ticks down. He rarely speaks, but he doesn't need to. Gomis cast Williams perfectly, and the repeated close-ups of his incredibly expressive face and eyes tell audiences far more than any dramatic monologue could.

Perhaps my description makes the film sound contemplative and slow. It's really not. While the style indeed feels leisurely, the mood subtly shifts throughout the movie. At one point, Satche's odyssey starts to feel almost like an observational documentary of Senegal, but it quickly and smoothly transitions into a stylized, near-musical montage. Another scene where he shows up late to a party honoring him at town hall plays almost like an absurdly comic scene from a Bunnuel film. Aesthetically, though, the style never changes, presenting Senegal in colorful realism while lingering on close-ups of Williams that would have made Carl Dreyer proud.

At times the content feels a bit off balance with this realistic style, and its only during these occasional moments that the film really seems to meander. But these moments allow our minds to wander as well, to consider the situation, the inevitability of death, and, at many moments, the beauty of life. So perhaps that's exactly the point.

Do you feel this content is inappropriate or infringes upon your rights? Click here to report it, or see our DMCA policy.
Alan GomisAujour'huiBlack Movie 2013Saul WilliamsToday