Review: THE IMPOSSIBLE is Too Soggy and Too Staged to Warrant Consequence 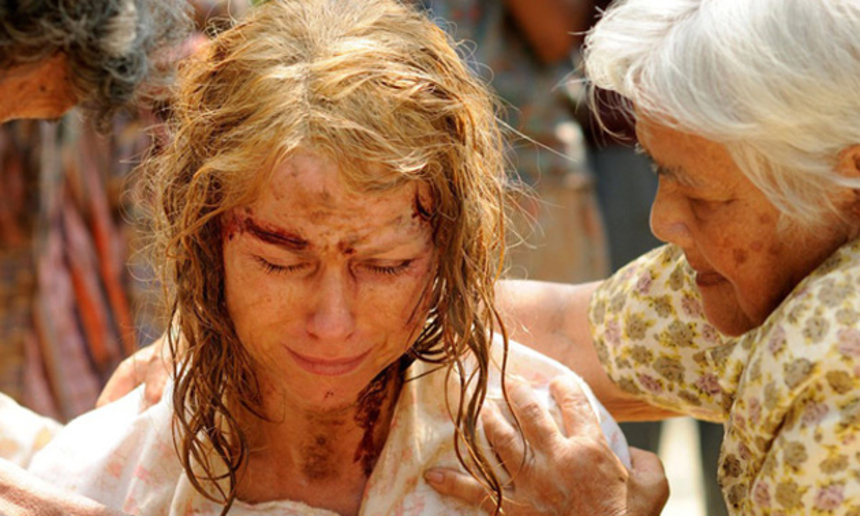 "Just close your eyes and think of something nice" is a refrain repeated several times during J.A. Bayona's Tsunami disaster film that sees Ewan McGregor and Naomi Watts - and their three children - attempt to re-unite after a tidal wave destroys their hotel and threatens their lives.

There is no arguing with the staging and execution of the disaster itself - a tour de force sequence that sees the camera, Watts, and young Tom Hollander swept away in a river of debris-strewn water for an unrelenting 15 peril-laden minutes. But the film itself seems to ignore that there are actual Thailanders in Thailand, and only focuses on 'saving the white people' for its runtime. Occasionally, a local will show up to help (having nothing better to do?), but the film only has eyes for Caucasians; not just the split-up McGregor-Watts clan, but other stranded European and American tourists. I'm not one to be easily offended by this sort of slanted storytelling, but it's impossible (heh!) to miss here.
The film does little to establish the family, only implying that their finances are spread a little thin, that Maria (Watts) is a doctor who is taking time off work to raise their boys, and that Lucas's (McGregor) sweet Japanese job may be in trouble. This minor character development is literally swept away by larger issues at hand. The first half focuses mainly on Maria and her eldest son trying to get medical attention for a fairly gruesome injury. It is as if Bayona saw Michael Haneke's recent remake of Funny Games and thought to himself, I can go further on making Ms. Watts suffer and cry for the bulk of a motion picture.

The film attempts to squeeze as much emotional grist as possible by having various parts of the family (eventually Lucas and the other two boys) get separated and re-unite ad nauseam. Case in point: the film's most egregious offense is a 'we will just keep missing each other' sequence. Ostensibly the movie's climax - involving moving hospital beds and lots of running around the where the characters keep crisscrossing without meeting in a hospital set-piece - the sequence, frankly, is offensive and way out of place with the straightforward drama that Bayona seems to be aiming for. It simply doesn't fit.

The film has the nerve to flirt with an Owl-Creek-Bridge kind of scenario but then pulls back its punch. I'm not sure which decision would actually be worse. Geraldine Chaplin shows up briefly to pontificate about the transience and beauty of life, but by that time, nobody cares and the film goes back to being "The Passion of Naomi Watts."
The Impossible was based on (inspired by?) the true story of a family who survived the actual 2004 tsunami that hit the coast of Thailand, but this is all traditional Hollywood moviemaking on display here. The film often teases that it will break out of 'formula,' but then pulls back at the last minute. Whether that was so it could adhere to actual events or for commercial concerns remains a mystery to me.
Nevertheless, the film does indeed look gorgeous. It displays one of the best uses of high contrast, super colour saturation I have seen, period. J.A. Bayona easily scales up the wonderful craft on display in his 2007 ghost story The Orphanage; the director knows what to do with a large budget in terms of spectacle, but then after putting all of that money up on screen, he asks that, well, you close your eyes and think of something nice.
(Review originally published during the Toronto International Film Festival in September 2012; The Impossible opens in limited theatrical release in the U.S. on Wednesday, December 19.)
Sign-In to Vote
Tweet Post Submit

Do you feel this content is inappropriate or infringes upon your rights? Click here to report it, or see our DMCA policy.
Ewan McGregorImpossibleJ.A. BayonaNaomi WattsTsunami

More about The Impossible