Review: DEXTER S7E12, SURPRISE MOTHERFUCKER (Or, A Strong Conclusion To An Inconsistent And Frustrating Season) 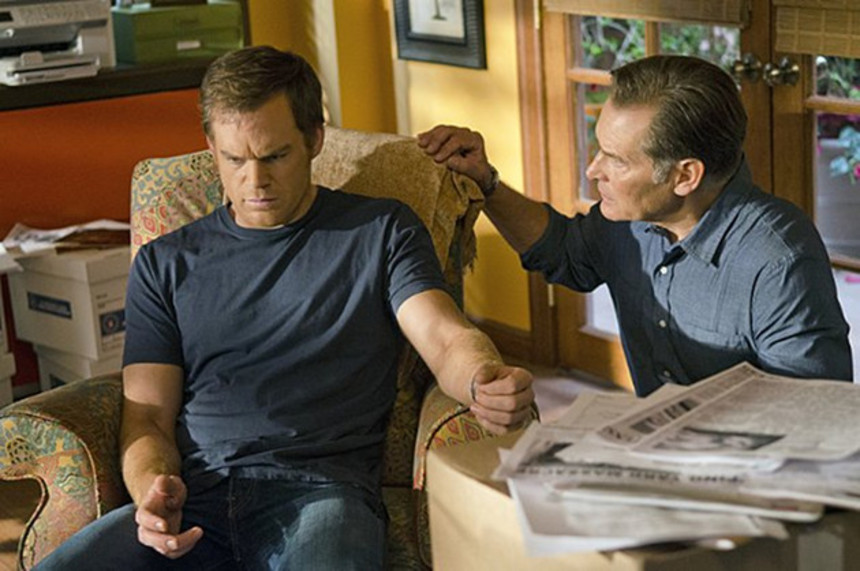 For those keeping track of such things, yes. You are correct. ScreenAnarchy gave a miss to reviewing Dexter for the past couple weeks because, quite frankly, after all the truncated storylines and soap opera diversions and struggles to maintain any sort of momentum whatsoever, I just couldn't be bothered. It's holiday season and I've got kids and shopping to do and my time was significantly better spent elsewhere. Or at least that's what I thought and that general impression was only confirmed upon catching up on those previous two episodes over the weekend, both of which had their moments but also showed off all of the weaknesses that have plagued the writing thus far this season.

And it's too bad, really, because the finale was reasonably good and would have been much, much better if only the show had actually managed to build a bit of steam heading into it and convinced us that we should care about any of these meandering stories.

So, where are we? Hannah's in jail, for one thing. LaGuerta is on a rampage. And Estrada is still on the run, having seen Dexter's face and therefore posing a significant threat. There are other minor notes here and there but these are the only ones that matters. So let's break it down into the good and the bad.

Why the hell doesn't Estrada call the cops and tell them Dexter tried to kill him? According to the show's own narration he's on the run for six days before Dexter catches up again and - more importantly - Estrada HASN'T DONE ANYTHING WRONG. Not that the cops know about, anyway. Dexter says he's on the lam from the police as well as him, but why? Why not just call his parole officer and say Dexter tried to kill him? There's no logical reason whatsoever for his failure to do so and yet he runs off and hides in a park instead. It makes no sense whatsoever beyond the very simple fact that the writers simply don't care about the Estrada story line any more than they have about many others this year and they're counting on you not paying enough attention to notice.

Also bad? The interminable flashbacks to Doakes, who was one of the weakest, most single note, most broadly played (in a bad way) characters ever to appear on this show. Had Doakes continued on to season two I likely would not have, that's how bad he is. And yet here he is suddenly appearing in soft focus flashbacks and adding virtually nothing to the proceedings other than extending the run time while keeping costs down because the footage was already all shot. Ick. He's been completely and utterly absent from the show for five complete seasons and only name dropped a few times prior to now this season, what's the point of the beatification?

There's Hannah, for one thing, present only briefly but delivering a very strong scene to start things off and clearly being set up as a principal character for the final season.

There's Dexter's initial out maneuvering of LaGuerta, for another, which is absolutely masterful.

And then there's the final confrontation of the piece, which turns out not to be about where Dexter's strongest allegiances lie - that was answered last week - or whether he can kill an innocent person when it suits his own needs - he can - but rather about where Deb's true allegiances lie and how far her lines can be pushed. It's a remarkably strong finish, and a properly messy one. One that resets many of the basic rules and assumptions of the show leading into what should be an all-bets-off final go-round in season eight, and does so in a way that respects the core of the show thus far, which is no easy trick.

Season Seven of Dexter goes down as one plagued from start to finish with far too much padding with characters introduced and discarded with no seemingly overall plan rather than to take what could have been a very good idea for a single final season arc and to spread it over two instead. That said, the bits that worked worked remarkably well and here's hoping the writing staff finds a way to bring a little more meat to the table in season eight.

Do you feel this content is inappropriate or infringes upon your rights? Click here to report it, or see our DMCA policy.
dextermichael c hallserial killertelevision