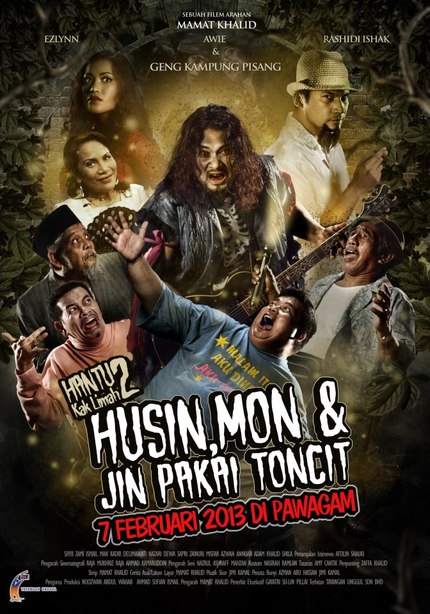 While the previous promo for Mamat Khalid's Hantu Kak Lima 2: Husin, Mon & Jin Pakai Toncit broke out the big hair the official trailer is breaking out the big gun. For the uninitiated, let me explain.

Khalid is one of Malaysia's most popular filmmakers, a multi-talent threat whose early credits include writing an absolutely gorgeous period drama - still one of the most expensive films the nation has ever produced - while both writing and directing slick, and also gorgeous, throwback to 1950s cult cinema When The Full Moon Rises. But it wasn't one of these glossy productions that made Khalid's name. Nope. His big break came with scrappy, low budget horror comedy Zombi Kampung Pisang, or, Zombies From Banana Village.

A very regional film, Zombi Kampung Pisang pokes (mostly) gentle fun at the stereotypes of Malaysian filmmaking while also indulging in them fully for a result smart enough to keep critics happy and audiences laughing along with the gag. And it proved popular enough that Khalid returned to the titular Banana Village a couple years later for a ghost themed sequel titled Hantu Kak Lima Balik Rumah. And now he's heading back a third time.

Khalid is sticking with the ghost theme for Hantu Kak Lima 2, but this time things are getting slightly bigger. Sure, the aesthetic is still deliberately rough around the edges and the comedy is still clearly very broad and catering to the local audience - these films were never intended for export at all - but there's also an obvious willingness to go for the big effects shots in this one while literally breaking out the big gun. Check out the trailer below.