Review: TALAASH Proves That Big Budgets Don't Have To Pander To Tiny Brains 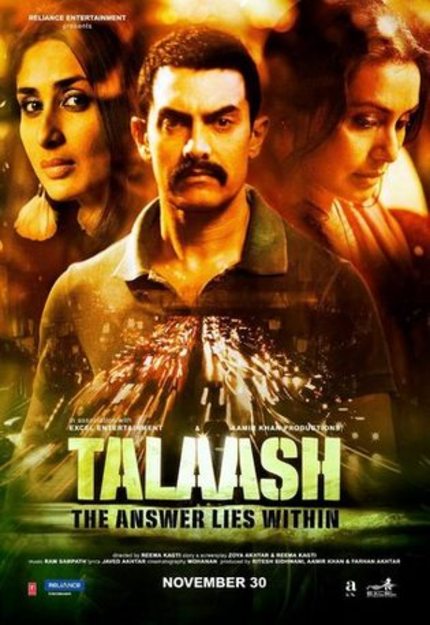 There is a very pronounced regressive trend over the last few years in Indian cinema. As Bollywood films gain visibility in the wake of India-focused films like Slumdog Millionaire, the local studios have decided to double down on their old patterns of production, rather than using this new potential audience as a way to reach out to the world. In a way, it's kind of admirable. India has a 100 year long glorious cinematic tradition that is unlike that of any other nation. There is, of course, something to be proud of in that. However, the way that Bollywood's devotion to tradition has manifested most often is in silly "action entertainers" like the films of Rohit Shetty or Prabhu Deva. I love many of these films, but I like them because they are fully dedicated to entertainment with no higher goals, not unlike a Fast & Furious or Die Hard. Talaash is an exception to that rule.

While the big Bollywood studios have stuck to their guns regarding the kinds of films they're interested in making, it has largely been the burgeoning independent film scene that has been pushing Indian film onto the world stage. This means more dour crime stories, more stories of poor rural peoples struggling against their own land at their own tenuous grasp on life, and more experimental films are beginning to appear at film festivals worldwide. This is a remarkable trend that is very recent, I'd say over the last three or four years. Before that Indian independent cinema very rarely made a scratch on the festival circuit. Now you can't swing a saree without hitting a fest with an Indian spotlight.

What is so remarkable about Reema Kagti's Talaash, is that it manages to take the best of both extremes and turns them into a western style thriller with an undeniably Indian flavor. The cast and crew list for this film is incredible. In front of the camera we have Bollywood's all time box office champ and notorious perfectionist, Aamir Khan, the hottest female performer in the industry in Kareena Kapoor, and the recently resurfaced Rani Mukherjee in a role that is leagues apart from her happy-go-lucky turn in the recent Aiyyaa. On top of those showstoppers, the hardest working man in Indian cinema, Nawazuddin Siddiqui also puts in another brilliant performance as a gimped lackey looking for a way out of the life to which he was born. Behind the camera the talent is just as intimidating, with writers like Zoya Akhtar who has two major successes already in her very short career with Luck By Chance and Zindagi Na Milegi Dobara, her brother Farhan Akhtar (director of Don 1 & 2, and Aamir Khan's megahit Dil Chata Hai), and the center of India's independent film universe, Anurag Kashyap (Gangs of Wasseypur, Dev D, Black Friday).

That is a mountain of talent whose collaboration could either end up as a terribly disjointed mess, or a wonderful melding of ideas. Talaash is decidedly the latter. Far from Bollywood melodrama, this is the kind of film that would feel right at home at your local multiplex. Not to say that it is all bland mainstream fodder, but Talaash is a reminder of what can be accomplished when the only goal is a good film, rather than going to screens solely with rupees in mind.

Aamir Khan plays Suri, a Mumbai police officer called in to work after a Bollywood star mysteriously drives his car into the sea with no clear reason. Khan surrounds himself with his work, to the neglect of his wife, Roshni and their marriage, already damaged by the untimely accidental death of their son. They each cope in different ways, and Suri's mechanism is to avoid any reminders of their little Rana by avoiding his wife and burying his head in the search for reason behind this death. The deeper he digs, the more complex the story, eventually the trail leads right into the red light district where Suri befriends a prostitute by the name of Rosie (Kareena Kapoor), who seems to have a line on the seedy characters Suri is tracking, but also seems to be hiding something crucial, but we're not sure just what. As Suri goes further and further afield in his attempt to solve the crime and avoid his grief, it becomes clear that something has to give, but what that is becomes the real mystery.

Aamir Khan's notoriety for perfectionism is well known, however, his support of independent minded artists is probably even more a part of who he is as a cinematic figure. Sure, his films Ghajini and 3 Idiots brought home some serious cash and rewrote the Bollywood box office record book, but he also used his clout to produce relatively noncommercial films like Peepli Live (India's 2011 Oscar submission), Dhobi Ghat (in which he appears in a supporting role), as well as his own televised newsmagazine, Satyamev Jayate, which became a huge hit and gained international notice for its mission to expose the everyday corruption with which many Indians live. This latest Aamir Khan Production is another in the line of high quality features stamped with his name not only on the top of the poster, but also in the production credits.

Reema Kagti has really come from nowhere with this film, and her direction is very impressive. Her first feature, Honeymoon Travels Pvt. Ltd. was a relatively lightweight but entertaining comedy set on a cruise ship. Talaash, on the other hand, is a heavy hitting emotional suspense thriller with a killer story and a number of fantastic performances, all woven together with panache by the young shot-caller. Her impressive visual sense is apparent from the very first frames in which the tone is set and the setting introduced in a very stylish manner. This eye for detail and mise en scene is present throughout the film, leading to a remarkably cohesive style even when the film moves from one place to another and from day to night, it always feels like Talaash.

Apart from being a little bit too long, I find little to fault in Talaash. Sure, they could've used more sense in cutting the finale and ending the film a bit earlier, rather than lingering in the emotion of the scene, but this was one of the areas where Bollywood's deep roots begin to show. It's a minor complaint, and only one I brought up because this review is, admittedly, so overwhelmingly positive. However, none of that diminished my enjoyment of the film in the moment, which is really why I was there.

2012 has been a banner year for Indian cinema, big and small. Last year I was able to find one Indian film that fit my criteria for the end of the year top ten. This year I think I'm going to make an all-Indian top ten parallel to my overall top ten. The good films coming out of India this year are amazing, transformative, adrenaline producing experiences the likes of which I haven't seen in a while, and I'm proud to have been there all along the way to share these successes. Talaash is very likely to make my top ten, heck, probably even my top five of 2012. If you're curious about Indian film, Talaash presents a high standard for the best of what India can do. Seek it out, I'm sure it's playing near you if you just search hard enough.