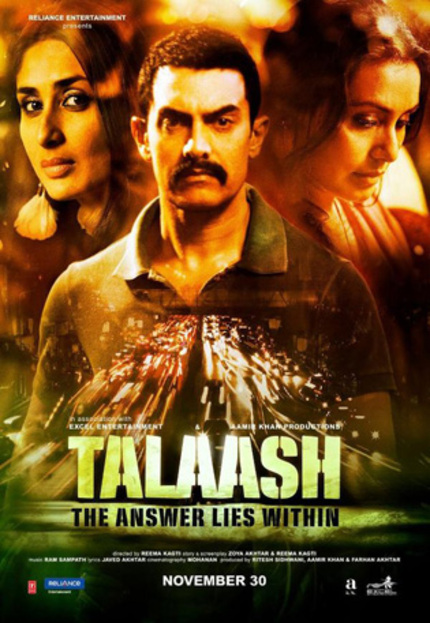 Bollywood's box office is ruled by a triumvirate of actors whose films make up the vast bulk of the biggest earners of all time. The three kings are Shah Rukh, Salman, and Aamir Khan. Shah Rukh is the romance king, Salman the action king, and Aamir is the perfectionist and prestige king. Because Aamir is such a perfectionist, his films are fewer and farther between these days, but if you look at the all time box office champs, his last film, 3 Idiots, and the one before that, Ghajini, are in the top five. Needless to say, whenever Aamir Khan finds a project that he wants to get on the big screen, both critics and film fans take note. The latest film project to catch his fancy is Reema Kagti's Talaash.

Normally, a six month delay would be a cause for concern. Usually it involves a lot of reshoots, adjustments, and rewrites. However, in this case, the schedule adjustment was for a different reason altogether. Over the summer Aamir Khan began airing an investigative television program in India called Sayamev Jayate (Truth Alone Prevails), which became a huge international hit. The program took on many of the societal ills and corruption that plague India behind the scenes but that the regular news programs weren't able to take the time to explore in depth. The show has gone on to get international recognition for helping to bring to light many of India's burning questions in a straight forward manner. Since Aamir Khan is a promotion machine when it comes to his feature projects, he knew that Satyamev Jayate would take up his time and energy for the summer months, hence the delay so he could commit to the promotion of Talaash when it releases on November 30.

In addition to being a new Aamir Khan film, Talaash also features two of Bollywood's biggest female stars in Kareena Kapoor and Rani Mukherjee (recently featured here for her upcoming film Aiyaa). Aamir Khan hasn't made a bad film in a while, even with new directors he seems to manage pretty well, so I'm looking forward to Talaash, it certainly looks to be a lot more serious that Ghajini or 3 Idiots. Check out the new trailer below.