Blu-ray Review: This Election Eve, THEY LIVE Warns Against Voting For Reagan! 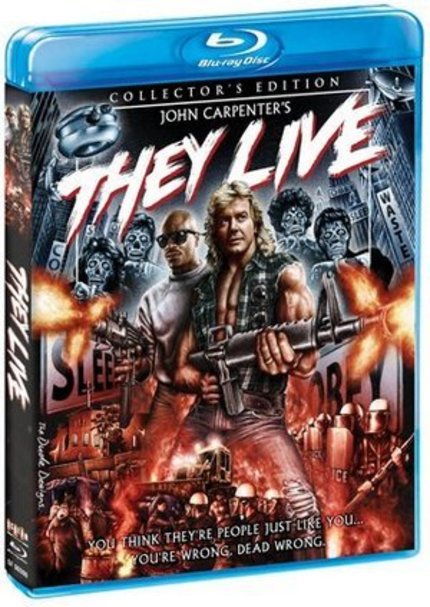 Politics in genre cinema is nothing new. Long before John Carpenter took on Reagan with They Live, or Don Siegel took on the communists (or the House Un-American Activities Committee, or HUAC, depending on how you interepret the film) with Invasion of the Body Snatchers, genre filmmakers, authors, and artists had taken firm political stances for decades. The beauty of genre based art is that it is able to pass below the radar of most intellectuals because they think it to be beneath them in the first place. So, the message reaches in intended targets, the proletariat, without ever having so much as raised an eyebrow. Of the two major works of the late '80s to take on Reaganism in America, Carpenter's They Live and Wes Craven's The People Under the Stairs, it is the former that lives on not only for its clarity of message, but also the fact that it's just a much better film. A Blu-ray of this film has been a long time coming, and I couldn't have been more excited with Scream Factory announced it was one of their acquisitions. Could it possibly live up to my sky high expectations? Read on.

Inspired by Siegel's Body Snatchers, 50's sci-fi nut John Carpenter decided to take a different angle on story of a society rotting from within with They Live. The film stars wrestling superstar "Rowdy" Roddy Piper, a major superstar in 1989, as John Nada, a transient handyman looking for work in Los Angeles only to find that all of the things that have been keeping him from getting ahead may not just be a matter of happenstance. When Nada stumbles upon a box full of cool shades, his worldview literally changes as this eyewear allows him to see through the subliminal messages that confront capitalist America every day. Reluctantly along for the ride is Frank Armitage (Keith David), a construction worker who is trying to do a good thing for Nada and ends up knee deep in Nada's mission. Together they attack the invading force with little more than a couple of automatic weapons and a lot of attitude.

They Live is, stripped of its political subtext, an out and out riot of a film. Roddy Piper, through his long experience with the World Wrestling Federation, was not only a hugely beloved star, but also a well-heeled performer. There was no subtle emoting necessary for this role, Piper is asked to chew the scenery to bits and spit it back at the audience, and he does so with aplomb. Keith David puts in a decent turn as his sidekick, but this is Piper's show all the way. The one scene in the film where David really shines, ironically, is the infamous fist fight between the two which is, quite possibly, the greatest fist fight ever shot. It is the stuff of legend, and I've included it below for your viewing pleasure.

If you haven't seen They Live, you're life has only been half lived. This is the stuff dreams are made of, and it is Carpenter's penultimate great film (I will vouch for In the Mouth of Madness any day of the week, but it's been slim pickins since then). Carpenter reveals in his interview for this disc that he prefers science fiction to horror, and this film is an excellent example of his dedication to the genre. Buy.

Until now, there has never been a decent special edition of this film on home video, so my hopes for this disc on the Scream Factory label were quite high. I'm happy to say that this film is, without any doubt, the definitive presentation of They Live. The A/V presentation on this disc is outstanding. The image is perfectly rendered, with a thin layer of grain when appropriate and an amazingly lifelike color palette that made me feel as though I was watching it for the first time. The audio is less of a revelation, mainly because it wasn't terribly mind-blowing to begin with. We are given a DTS-HD MA 5.1 audio track that is very clear, but doesn't utilize the surrounds very well, even though the numerous fight scenes and gun battles would have been perfect opportunities. I presume that the film was originally presented in Dolby Stereo, but I cannot find corroboration for that, and this would explain that lack of expansion.

Beyond the obvious recommendation for the disc based solely on the presentation, this disc holds an amazing number of new and vintage bonus features that put this version head and shoulders above any other offering on the market. First off there is an audio commentary with Carpenter and Piper on the film that is entertaining and engaging, as both are great story tellers; there is also a vintage EPK for the film that features some behind the scenes footage as well as vintage interviews of the leads. Both of those features are archival and ported over from past releases, but Scream Factory really took it to the next level with the new stuff.

Red Shirt pictures, one of the leading names in bonus content for genre films, did a bang up job assembling interviews for the disc and lined up an impressive number of cast and crew members for the first time in a long time. We get to hear from John Carpenter, Meg Foster, Keith David, and plenty of the artistic and stunt talent on the film. These interviews are fantastic and really show the great love that these performers still have for the film, which always makes me smile. I like to think that the films I love were made with love and are still appreciated by the people who made them, it isn't always the case. On top of that we get the usual trailers and TV spots, but there is a really cool bonus feature that includes some never before seen footage from alien commercials that were made especially for the film, which I found fascinating.

I cannot recommend this film enough, and if you're any kind of fan at all, Scream Factory's disc is the only way to go. My highest recommendation!!!

Do you feel this content is inappropriate or infringes upon your rights? Click here to report it, or see our DMCA policy.
John CarpenterRay NelsonRoddy PiperKeith DavidMeg FosterGeorge 'Buck' FlowerHorrorSci-FiThriller