VIFF 2012 Dispatch: THE CAPSULE, A STORY FOR THE MODLINS, And MORNING OF ST ANTHONY'S DAY 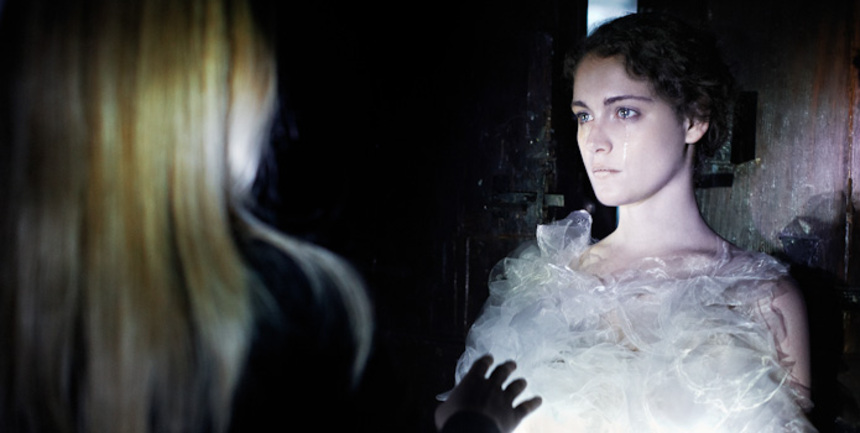 Though Athina Rachel Tsangari's short film The Capsule played third after two others, I'm reviewing it first as it was the title with which the other two were programmed (i.e. you show up to see a showing of The Capsule, and the other two are accompanying it--literally--as footnotes in the guide). I haven't seen Tsangari's feature Attenberg, which was extensively covered here on Twitch, nor any of her previous work. The Capsule, however, is evidence enough that she possesses a bold talent for stunning, unexpected and powerful imagery--and an expert knowledge of how to marry that imagery with haunting sound design in a manner which catches viewers off-guard, but keeps the figurative hooks in until the credits roll. This strange short sometimes falls too readily into the shallow waters of a high-fashion editorial version of edge, but mostly offers a haunting glimpse at how girls (here imagined as feral beasts of myth) become women, or fail to, as the case may be.

A Story for the Modlins (which played first chronologically in the screening) takes a chance event--the discovery of a garbage bag full of photos, books, videos and tokens from the Modlin family--and fashions it into a crude but fascinating narrative. Turns out the patriarch of the Modlins, Elmer, was an extra in the infamous birth-celebration scene in Rosemary's Baby, though his story sees him leave Hollywood in favor of Madrid, detouring onto a bizarre, if modest, path that would have led to total obscurity were it not for this short film. Elmer and his wife, obsessively prolific artist of religious iconography Margaret, appear in a found-footage video tape, proudly displaying her eerie, biblically inspired paintings, providing the film's most intriguing find. The tape single-handedly makes the doc worth watching, and the pieced-together story (which director Sergio Oksman readily admits is presumed) provides helpful context. A competent curiosity, at the very least.

Joao Pedro Rodrigues, already in town with his buzzed-about feature The Last Time I Saw Macao, delivers all the elements of a great short film in Morning of Saint Anthony's Day: mystery, ambiguity, methodical pacing and a sense of purposeful unfinishment. An often-overhead camera follows a slew of silent, zombie-like young adults as they march, more cluelessly than menacingly, through a sort of deserted urban landscape. They puke and make poor directional choices. Though in his Q&A, Rodrigues debunked some of the mystery by admitting that this was his version of hungover festival-goers the morning after the titular day, the tone remains effective and perhaps his insight lends it some humor that isn't entirely unwelcome.

Do you feel this content is inappropriate or infringes upon your rights? Click here to report it, or see our DMCA policy.
2012a story for the modlinsathina rachel tsangarijoao pedro rodriguesmorning of saint anthony's daysergei oksmanshortsthe capsuleviff