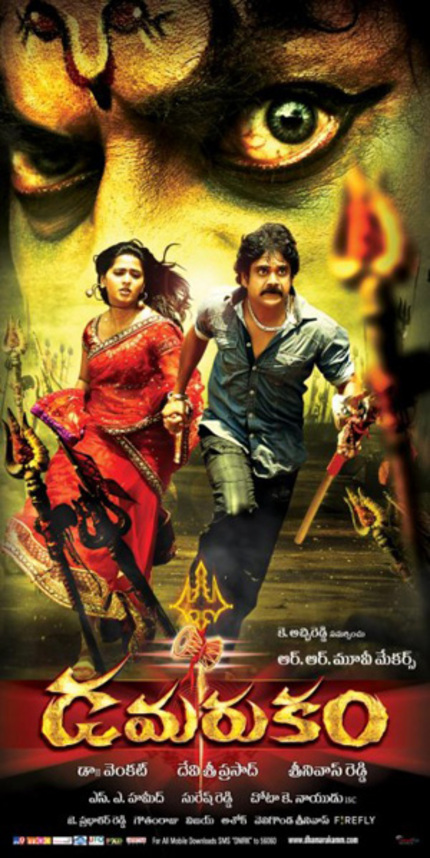 Even though I'm still stinging a bit from the disappointment of 2010's promised Telugu socio-fantasy blockbuster, Shakti, my faith in South Indian fantasy remains steadfast. The latest film to catch my eye is the upcoming Damarukam, starring Nagarjuna and Anushka Shetty. The trailer looks completely bonkers and not only does it include angry deities, but also the amazingly elaborate south Indian weaponry that Tollywood does so well.

The socio-fantasy is a film genre that is very specific to south Indian film, and Tollywood in particular. Most of these films involve earthbound humans interacting, and often attempting to outsmart or outfight, Hindu deities or other spiritual beings. The major south Indian film industries all have some form of devotional cinema, but Tollywood does them up big, often making full-on Hindu religious films on big budgets starring big name actors and doing big time business at the box office. The last pure devotional to make waves was Balakrishna's Sri Ramarajyam, which got good reviews and did solid business. These films focus entirely on stories from the major religious texts like the Bhagavad Gita and Ramayana, however, socio-fantasy is a different genre altogether.

SS Rajamouli's 2007 hit film, Yamadonga, is probably the perfect example of the socio-fantasty as a box office force. The film, also starring Jr NTR, dealt with an earthbound human who steals the power of the God of Death through some trickery in the afterlife. The story is split between the after world and the terrestrial world and, though it may leave those with less than a passing interest in Hindu mythology a bit lost, it is a very entertaining film in it's own way.

Damarukam seems to be taking a more aggressive approach to the after world, with demons, serpents, and enough fighting to fill a dozen Expendables. Without subtitles, I can't really tell what's going on, but it looks pretty rad, and I'm definitely up for the challenge. I've never seen a Nagarjuna film, and while aficionados have encouraged me to start with Ram Gopal Varma's '90s classic Shiva, I think this might have to be my entry point. It looks fucking bonkers.

If the film can keep its focus on the nutty stuff I'm seeing in the trailer, and avoid too much deviation into messy masala, I think it could be an interesting watch.  Let me know what you think below!

Damarukam is scheduled to open worldwide on October 12th or 19th, you never know...