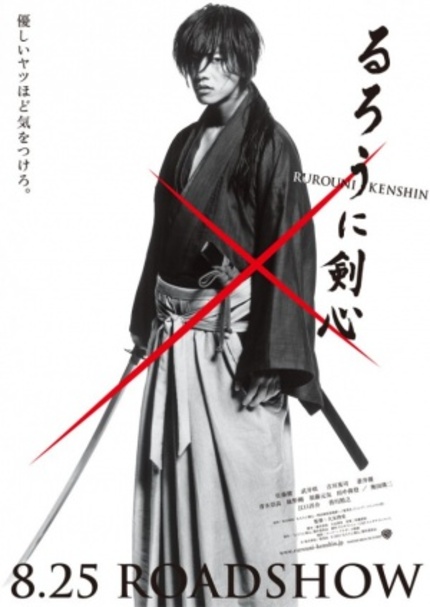 When I learned that the live-action film based on Rurouni Kenshin was selected for screening on Sitges I was pleasantly surprised. The timing couldn't be better, as I had finished reading the original manga just a couple of weeks ago and I really enjoyed it. On the other hand, making the translation from manga to a live-action film is always tricky. There's always the risk of becoming something too bizarre if they go for an accurate visual style, or straying too much from the source material and becoming something else. Rurouni Kenshin is one the most successful and acclaimed series of all time, both in its original manga and anime forms, so the challenge of translating the skilled swordsman's adventures to the silver screen was pretty big. And I'm very happy to say that the final result delivers. The film's director Keishi Otomo and his crew have managed to make a film that stays true to the original source while being a very enjoyable film on its own.

The story is set around 1878, in the first years of the new Meiji era. Kenshin Himura is a wanderer swordsman who carries a dark secret from his past. He was formerly known as the assassin Hitokiri Battosai, a deadly samurai who fought in the Bakumatsu war in the Emperor's side and contributed to its victory through the trail of dead people he left behind. But now Himura wanders the countryside of Japan offering protection and aid to those in need as a way to redeem himself of the murders he committed, carrying a reverse-bladed sword unable to kill. As he arrives Tokyo he's confronted by Kaoru Kamiya, the young and beautiful heir of a kendo dojo, because someone who claims to be the Battosai has been killing people using the name of her kendo school. At the same time, Takeda Kanryu is a cunning money-minded industrialist who's trying to establish nationwide control of the opium trade forcing doctor Megumi Takani to work for him. Megumi manages to escape and asks for shelter in Kaoru's dojo, thus becoming a target to Kanryu and his band of assassins. So Kenshin decides to join forces with Sanosuke Sagara, a street fighter, to bring down Kanryu's gang and their drug empire.

The film takes the first two major archs of the manga series and merges together with some changes, throwing some of Kenshin's backstory in the mix. Considering the length of the original story it's certainly a wise decision to not try to fit in too much in one single film, so the result is a film that works both as a standalone but also one that could perfectly serve as the first chapter of a saga. The casting is pretty good, and those go you familiar with the manga will have no problems identifying your favorite character. Takeru Satoh does an excellent job as Kenshin, portraying the two sides of the titular swordsman both as the gentle wanderer and the cold blooded killer, and he's surprisingly strong in the fight scenes.

The action scenes are easily one of the highlights of the film. Director Keishi Otomo has done a wonderful job portraying those, delivering some of the best swordplay scenes in recent years. One thing that impressed me the most was the tremendous sense of physicality of the fight scenes. Considering that some of the fighter's skills border the superhuman powers, they managed to make those scenes perfectly believable, without getting into some of the problems involving the use of wires in those kind of choreographies like the usual "floaty" feeling. The balance between action and drama is quite well balanced, always moving the film forward at a good pace.

All in all, I really enjoyed this film. I'm always a little wary of this kind of adaptations, because more often than not they can go wrong. It's true that maybe the audience coming into the film without previous knowledge of Rurouni Kenshin's world could find some minor issues here and there, but I'm pretty sure they won't have a bad time watching it. I'm really looking forward to the future of this live-action adaptation, that certainly proves that translating from paper to screen can result in a wonderful experience