Review: What Lola Wants, Lola Does Not Get in LOLA VERSUS 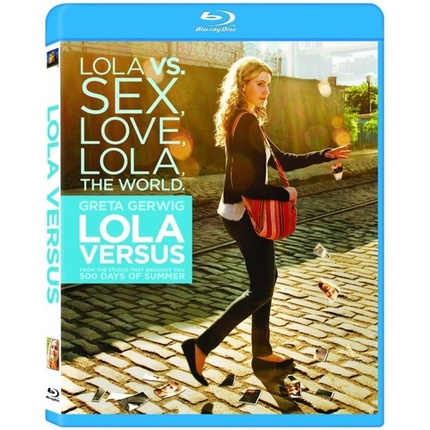 Take everything that's clichéd, dull and wrong-headed about American independent film, over boil it in a pot of tepid tap water, and you've got a pretty good bead on Lola Versus. But this food/film analogy wouldn't be complete without one final step: Fail to serve.

Despite its numerous other faults, Lola Versus will be remembered by a certain segment of critics and filmgoers for not only failing to materialize on the big screen on the initial date promised, but for having its theatrical release date pushed back at least six times - honestly, I lost count - before finally letting go and giving up. At least that's the case for my Midwestern American market. Six times. So, now that the film is finally turning up in your friendly neighborhood saccharine-hued DVD vending machine, it's as good a time as any to catalog the film's cinematic sins.

Born in the fading shadow of once-popular TV programs like Sex in the City and Friends, Lola Versus is the exact kind of low budget cookie-cutter tripe posing as a hip, young indie film that drives this critic mad. Lola, the film's titular single-girl-in-crisis, is played by the always talented and charming Greta Gerwig, who is sadly squandered here. All the more tragic, since this is a rare leading role for the actress, who carries things for as long as possible thanks to residual goodwill from her head-turning part in Greenberg. As her life crumbles before her (and our) eyes and leaves her spiraling in a free all, of-the-moment terms like "hot mess" come to mind - except that this is Greta Gerwig we're talking about - always attractive in her every-girl way, if never contemporarily "hot". In any case, Gerwig gets some good-natured help from Hamish Linklater, himself coasting on residual goodwill from his head-turning part in The Future.

Don't be fooled by Lola Versus. For moments it's filmed in the visually impressive style of last year's Like Crazy - another modern "indie" film about young people in troubled love - its true soul is revealed in the bulk of the visual rest of the film: utterly flat, merely conventional looking; another mini-major (Fox Searchlight) tour of NYC's loud clubs, hipster markets, and spacious movie apartments that people like this in real life couldn't touch one quarter of. It cannot maintain its desperate veneer, and quickly is revealed for what it is: Another conventional "chick flick" disguised as a credible indie. It portents "edginess", what with its frequent f-bombs, sex talk, and "acceptable lewdness". And yet, it refuses to be truly graphic. In the Lola Versus world, pole dancers perform in bikinis and everyone has sex in their underwear. This observation is not a complaint in search of rawer content, but rather an observation of the film's pervasive disingenuousness. 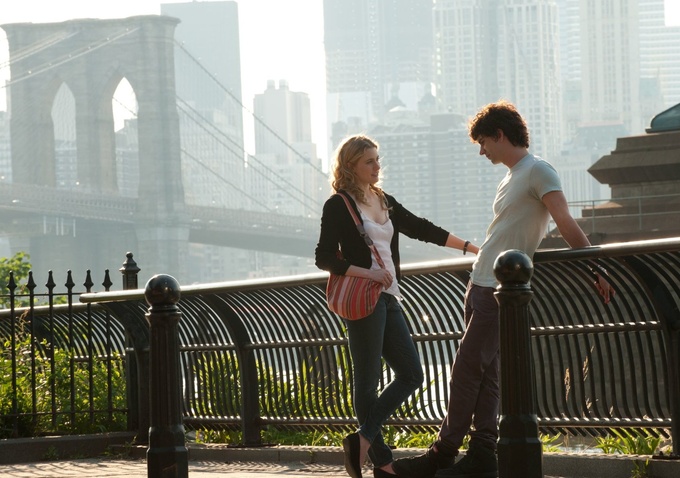 Clumsy attempts to reflect a certain relationship milieu (a woman - girl? - in her late twenties/early thirties) betray young director Daryl Wein's unqualifications for telling this story. Any and all hope of something like a painfully honest Annie Hall-style NYC relationship comedy is fumbled by the presence of 1.) Lola's best friend Alice (Zoe Lister Jones), displaying all the nuance and texture of the worst kind of sit-com supporting character, 2.) the hip stunt casting of Lola's parents, played by Debra Winger and Bill Paxton (both far too good for this), and 3.) a quirk-wad rollerblading dork (Ebon Moss-Bachrach) for the story's token "mistake" boyfriend. Yet despite this toxic pile-up, Lola Versus manages not to be an out-and-out dishonest film - the character is humiliated for her actions a few too many times for that - just one that that seriously fumbles the execution.

Provocative character study or feature length situation comedy? Lola's dilemma (plight of the modern cast-off single girl) is a potentially worthwhile conundrum for movie fodder, but in this case, it lacks any meaningful introspection and weight. This is something Fox Searchlight clearly knew, as the studio took on the summer release calendar (six times!), ultimately suffering a humiliating defeat that is unfortunately worthy of this "hot mess".

(LOLA VERSUS is currently available on DVD and Blu-Ray in North America and perhaps elsewhere.  This review covers the theatrical release.)


Jim Tudor contributed to this story.

Do you feel this content is inappropriate or infringes upon your rights? Click here to report it, or see our DMCA policy.
Daryl WeinZoe Lister-JonesGreta GerwigJoel KinnamanHamish LinklaterComedy

More about Lola Versus