Review: THE SESSIONS Helps Everybody Get Their Jollies 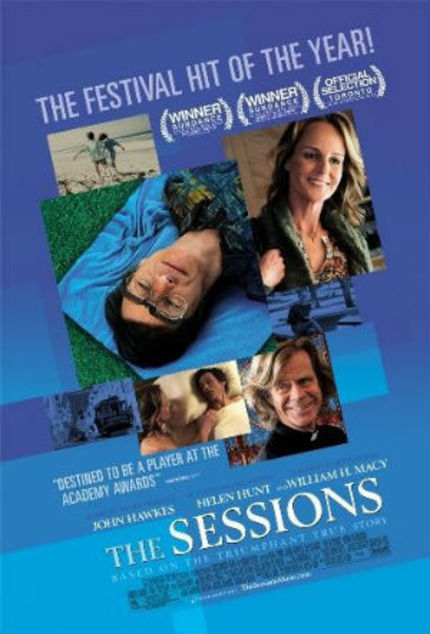 The Sessions tells a true story about a physically disabled man who enlists a professional sex surrogate to help him through the difficulties, both emotional and logistical, of losing his virginity. That may sound like shameless Oscar-bait -- a perception enhanced by the presence of John Hawkes, Helen Hunt, and William H. Macy -- but in truth the film is simpler than that, more small-scale, with a light and unpretentious sense of humor. Were it not for its frank sex scenes, it could be a TV movie.

I think it's important to make that distinction because otherwise, when you hear "true story," "disabled man," and "Helen Hunt," you think, Oh, boy, here we go. Get ready to be forcibly inspired by some grim thing I'll never want to watch again. But it's not that kind of movie. For one thing, it's too upbeat. For another thing, it's not about a handicapped man fighting the system or battling for equality. It's about a guy who wants to have sex. Everyone can relate to that.

Hawkes, his lean body and gaunt face serving him well, plays Mark O'Brien, a 38-year-old poet who spends most of his time in an iron lung and all of his time in a horizontal position. Stricken with polio as a child, he has virtually no control of any muscles below the neck, though he's not "paralyzed," strictly speaking. Nor is he complacent. Before the film begins, in 1988, he has already graduated from UC Berkeley, attending classes on a motorized gurney and using a mouth-held wand to type papers.

But unlike most college graduates and Berkeley residents, he's never had sex. He's unsure of the "hows," which makes him reluctant to actively seek a "who"; and not having a "who" means he has little motivation to research the "hows." At last he hits on the idea of a sex surrogate, one who specializes in helping the disabled learn how to adapt the act of doin' it to their specific circumstances.

This brings him to Cheryl (Hunt), a respected professional with an understanding husband (Adam Arkin) and an oblivious son. She is happy to explain the difference between what she does and what a common prostitute does, including the fact that she can only have a maximum of six sessions per client, lest attachments form. Also, your basic street whores seldom take the time to help a nervous client become comfortable with his own body, nor do they have the psychological training to do so.

As written and directed by Ben Lewin (who also suffered from polio as a child but is mobile now), the film emphasizes Mark's self-deprecating sense of humor. That makes a world of difference for the audience: if he can laugh at himself, so can we. Affecting a Massachusetts accent that makes him sound like the friendly, garrulous neighbor who's always got a story to tell, Hawkes portrays Mark with outstanding sensitivity and sweetness, in addition to nailing the role's physical demands. Hunt's sharp, expressive eyes are important -- there is a preponderance of reaction shots here -- though her Massachusetts accent is hit-or-miss. (Mark and Cheryl are coincidentally both Massachusetts transplants.) William H. Macy is a welcome sight, albeit a mostly unnecessary one, as a Catholic priest whom Mark confides in.

Religious faith plays a minor but interesting part in the story, with Mark concerned about the morality of his desires and frequently wondering how God figures into it all. In a subplot, Cheryl is converting to Judaism for her husband, suggesting that faith is mutable. A woman at the synagogue (played by Rhea Perlman) tidily summarizes the movie's message when she praises Cheryl for being unselfconscious about the nudity required in the ritual cleansing: "This is your body. This is the body God crafted for you." Whether it's nimble or feeble, it's a gift from God, so make the most of it.

Do you feel this content is inappropriate or infringes upon your rights? Click here to report it, or see our DMCA policy.
Ben LewinMark O'BrienJohn HawkesHelen HuntWilliam H. MacyMoon BloodgoodBiographyComedyDrama