Review: SMASHED Offers a Sobering Look at a Young Alcoholic 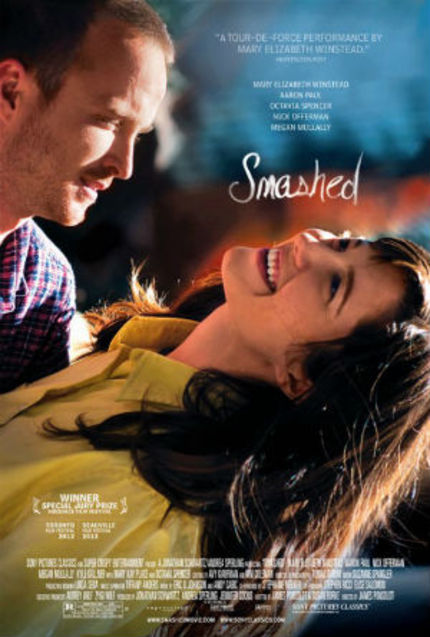 Young and in love, married couple Kate and Charlie Hannah like to get smashed. Like GG-Allin-meeting-your-Christian-parents smashed, someone is going to vomit and piss themselves at some point in the night. They spend their days in bars getting drunk and nights having unconscious sex. The good life, right?

Things change, however, when schoolteacher Kate -- Mary Elizabeth Winstead in a knockout career performance -- throws up in the middle of class from sipping too much whiskey before entering the building one morning. The crack she smoked for the first time while being black-out drunk the night before may have also played a part.

When questioned by school authorities, Kate tells them she's pregnant, and now must sober up and figure out how to extricate herself from this unfortunate lie. With help of the school's vice principal, Dave (Nick Offerman, who says his most awkward line in his career ever) and newfound friend Jenny (the always wonderful Octavia Spencer), Kate decides to get sober. She begins to clean up, and her marriage to Charlie (Aaron Paul) is put to the ultimate test as he continues his efforts to hit the bottle as hard as he can. She's a work-in-progress and he's a train-wreck just waiting to happen.

Alcohol addiction is no laughing matter, but co-writer/director James Ponsoldt transforms this disease into an honest, somber, and often good-humored story. Being a guy who's butted heads with alcohol, I can see Ponsoldt understands that even with living a great life, even with being super happy, alcohol often sneaks up, takes control, and sends your life spiraling in all kinds of horrifying directions, completely out of control. It's like being damned to listen only to Michael Bolton for all eternity; nobody wants that.

With that being said, this is a light-hearted yet bracingly real look at a young alcoholic, driven by a strong lead we can relate to and care for during the awkward, sad, and hilarious moments when she's desperately trying to take control. Mary Elizabeth Winstead (Scott Pilgrim Vs. The World) is absolutely terrific. She simply gets it. She gets the rigid and painful experience of giving up something that was once so fun and innocent. Winstead was born to be a star.

Most films dealing with booze-loving people tend to cast older actors, but Smashed catches the disease at its most youthful, absent-minded stage, the mid-twenties. Ponsoldt paints the dangerous-but-oh-so-fun portrait of a drunk woman trying to better herself, and it's smashing.

(Review originally published during the Sundance Film Festival in January 2012. The film opens in limited theatrical release in the U.S. on Friday, October 12.)