Review: SEVEN PSYCHOPATHS Is Less Than The Sum Of Its Parts 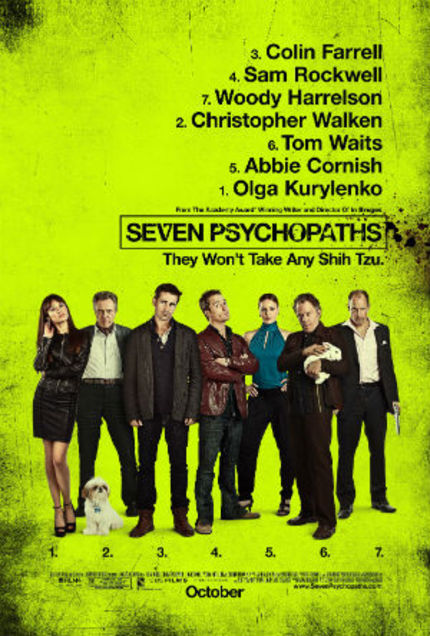 Marty (Colin Farrell) has a problem. He has several, actually, but the only one he seems to notice is that he has completely and utterly failed to write the screenplay promised long ago to his frustrated agent. Titled Seven Psychopaths, Marty wants to create the film to end all psychopath films. Literally. He aims for nothing less than subversion of the entire genre - a film that starts with guns and violence but ends with love and peace. The problem is that he's only thought of one psychopath so far and it's a pretty shit one at that.

Enter Billy (Sam Rockwell), Marty's best friend, determined to supply a bit of source material. Should this end with a co-writing credit that would be fine, too. A struggling actor, Billy keeps his lights on thanks to a dognapping scheme cooked up with his older accomplice Hans (Christopher Walken). And the dogs lead to more psychopaths than anyone could possibly have anticipated when they steal the beloved pet of one of LAs most violent crime lords.

Irish filmmaker Martin McDonagh won a loyal international cult with his debut feature In Bruges - also starring Farrell - but his sophomore effort is likely to win him little more than unfavorable comparisons to Charlie Kaufman. Making films about films is a dicey game at the best of times, successes like Adaptation and Barton Fink serving as the exceptions that prove the rule that this is pretty much always a bad idea. Because, at the end of the day, nobody fucking cares that it's hard to write a screenplay, no matter how much you try to dress it up.

Seven Psychopaths bounces between a large cast, multiple story threads and numerous vignettes culled from Marty's failed writing in an effort to keep the energy high and things ticking along at a generous clip. The film goes to great lengths to make you aware that you're having fun. That this is clever. You know, it's meta and meta is good, right? The problem being that Seven Psychopaths is so meta, and so meta on a subject that has minimal emotional weight, that it crumbles under itself, failing to cohere into any sort of satisfying whole.

That failure, the lack of any substance for an audience to latch on to, is really quite tragic. Because while Seven Psychopaths fails to become any sort of unified film, it is actually loaded with fantastic moments and performances. Individual lines are fantastic. The set pieces are clever and well executed. The numerous cameo appearance are well chosen, with familiar faces popping up in clever ways from start to finish. And the performances - with the possible exception of Woody Harrelson, who verges into hammy territory at times - are very strong. Farrell is a funny guy and deserves the chance to show it more often. Rockwell has been given a long leash to indulge himself, which he does to great effect. And this is without a doubt the strongest performance Walken has given in years.

Take Seven Psychopaths as a series of moments and a very great many of those moments are pretty damn great. But they work against each other instead of together far too often and the film quickly loses steam as it becomes increasingly apparent that it's just ultimately not about very much of substance. Rather than creating a classic of his own, McDonagh largely leaves us with a new appreciation of just how hard it is to do what Charlie Kaufman makes look so easy.