DVD Review: YOUR SISTER'S SISTER Is Nice, But Nice Doesn't Mean Much

Matthew Lee
Contributor; Derby, England
Tweet Post Submit
The trick with low-key, down-home indie storytelling is to show your audience how, while the things taking place on screen might not look like much, they're quietly life-changing for everyone involved.

Lynn Shelton's fourth feature, Your Sister's Sister, played earlier this year at the Tribeca Film Festival, where my colleague Christopher Bourne found much to rejoice about. My view is quite the opposite. The film is a pleasant-enough 90 minutes, beautifully shot, obviously heartfelt, yet it never quite convinces that the little earthquakes the plot sets off mean much of anything, or that the cast have really grown in any appreciable way as as a result of coming to terms with them.

Jack (Mark DuPlass) is a thirty-something urbanite still brooding a year after his brother's death. Iris (Emily Blunt), Jack's best friend persuades him enough is enough, that what he needs is some quiet time at her family retreat out in the middle of nowhere. But when Jack makes the trip he finds out Iris's sister Hannah (Rosemary DeWitt) has already booked in - and when Iris herself turns up the next day a tangled little pas de trois kicks off, with all three nursing some kind of deep-seated emotional bruises they're not at all eager to discuss.

But Iris hasn't had a chance to really connect with Jack or her sister in forever; Jack wants to be free of his depression, even if he doesn't quite know how to escape its clutches, and Hannah is trying to work out what she wants to do with her life given a chapter of it just came to an abrupt and messy close. So the three of them slowly start to talk; it takes liberal applications of booze, but they get going in the end, and once the embarrassing chit-chat is out of the way they slowly start to work out what they really feel for each other, and where things might go after they're clear about that.

Shelton is far too smart to let this play out as simple mumblecore platitudes, or hipsters generally over-exaggerating their emotional problems. She's not interested in outright mockery or disdain, either - Your Sister's Sister is a warm, compassionate film, wryly funny rather than sarcastically poking fun at rootless man-children and women who can't commit. It's just that nothing here ever conveys any real degree of significance, whether it's to the character's lives or the way they plan to live them from here on out.

This is not helped by the lack of anything grounding the trio, where every other detail we find out about them is told to us, rather than shown. Duplass tries his best to make Jack a likeable sort despite his emotional distress, but the thing is that distress never really comes across as much more than "My brother is dead - what a shame". We learn everyone really liked the guy, and that Jack gets maudlin over his passing at the drop of a hat, but the idea he's been in mourning for a year seems like more of a dick move than a tangled web of neuroses and general self-doubt preventing him from processing a loved one's absence.

Similarly, Emily Blunt strains to convey any depth to Iris's relationship with Jack beyond "My best friend's acting kind of self-obsessed - what a shame". Shelton doesn't waste her talent the way Rian Johnson did with Looper, but despite Blunt's considerable charm you can never quite shake the impression their interactions are only a few steps above your typical popcorn romantic comedy. The two of them never feel particularly complicated, each saddled with a simple psychological trait and struggling to flesh that out with body language and meaningful pauses alone.

You could still sum Hannah up in a single line, but Shelton seems well aware she's dealing with a potentially reductive cliché and deftly skirts around any narrative pitfalls to hand DeWitt the most interesting character of the three. For the first two acts, at least; if the Big Reveal seems fairly underwhelming, Hannah's part in it is arguably something the other two could justifiably get really angry about, and the idea Jack and Iris would just calmly brush the whole thing aside to preserve family harmony seems more than a little facile.

It all seems fairly Hollywood, to be honest. For all DuPlass, Blunt and DeWitt work really hard and for all Shelton obviously cares about her awkward little love triangle the whole thing just never gels into anything deeper or more meaningful than a simple chamber piece running on rose-tinted fluff, witty remarks and a big ol' happy ending. The resolution feels largely underwhelming and unearned, with no real sense these three people have started any bold new chapter where they take responsibility for their lives, much less that they'll have to carry what happened in that house for years to come.

Compare this to something like Mike Ott's brilliant Littlerock; another film about people finding themselves, but one where the leads do a far better job of balancing growth and change with the realisation that the most important decisions in their life can still involve them doing some really stupid things, and that they'll have to deal with the consequences of that stupidity for a long time. Ott works with teenagers, not adults, but the complexity and maturity of his writing feels like the kind of approach you'd hope Your Sister's Sister would adopt - when in reality there are times Shelton feels one coat of blockbuster gloss away from going the full Garry Marshall. 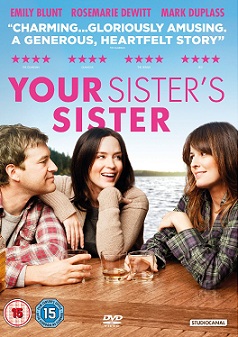 Regardless of how you feel about the movie, Studio Canal U.K. give Your Sister's Sister a quality release on home video. This is one of the company's better DVDs (a BluRay is also available), plainly trying to capitalise on the film's worldwide acclaim but none the worse for it. The disc boots up past the Studio Canal logo and three trailers (for W/E, Delicacy and Carnage) to a simple menu, a collage of publicity stills from the film with short animated transitions between sections - it's a little fussy, but pleasant enough. The film has been divided into twelve chapter stops.

The picture is solid for a standard definition format - nothing exceptional, but perfectly watchable all the same. Shelton and DP Benjamin Kasulke go for a soft, fairly naturalistic look, not unlike regular TV but with a noticeably richer colour palette. There's some grain, but it seems more like an artistic choice or necessity than any lack of attention to the technical side of things. The DVD loses some detail in darker scenes, and the image in general is slightly fuzzy, but there's still a good amount of depth (details on faces, wrinkles in clothing and so on).

The basic 2.0 stereo track is fine (Dolby 5.1 is also available). Despite what the DVD menu would like you to think there's actually almost no music in the film, earnest acoustic strumming or otherwise - the sound seems to be all recorded on location, but despite the natural reverb the three actors speak perfectly audibly throughout. Removable subtitles are a little small but clear, legible and largely free from any grammatical or spelling errors. Interestingly the DVD includes a descriptive audio track - the film is so dialogue-heavy this doesn't actually add as much audio as you might expect for great stretches of the running time, but it's very well written all the same.

The one substantial extra is a commentary track, which sees Lynn Shelton joined by several members of her crew - so many it's a lively, convivial track from minute one, the party frequently creased up laughing over memories from the set (largely the mundane realities of film-making versus what ended up on screen). Little of the conversation feels that surprising - they didn't have much money, a lot of work went into the production that audiences barely see, there was a lot of giggling behind the scenes - but Shelton, who's clearly good friends with everyone there, makes a good moderator and the whole track strikes a decent balance between technical analysis and good-natured joking around. Note, unfortunately, that the commentary is not subtitled.

The disc also includes the original trailer, which is decently cut but as usual gives away the majority of the plot inside two minutes and is probably best avoided.

Your Sister's Sister is a gentle, well-meaning film, beautifully put together and making decent use of three very talented actors - but it's too nice, too gentle, and about as deep and meaningful as that title suggests (he's, like, talking about her! Do you see? Do you?). There's nothing outright wrong with the film but it's hard to understand what there is about it that's appreciably more human than any number of Hollywood rom-coms. So many other directors have turned out low-key, intimate dramedies far more moving and more profound than Your Sister's Sister it's hard to specifically recommend it - but if you want to take the plunge, Studio Canal's U.K. DVD is certainly a great way to watch the film.

Do you feel this content is inappropriate or infringes upon your rights? Click here to report it, or see our DMCA policy.
Lynn SheltonMichael HarringMark DuplassMike BirbigliaEmily BluntComedyDrama