Matthew Lee
Contributor; Derby, England
Sign-In to Vote
Tweet Post Submit
People accuse old-school horror films of being emotionally retarded, in that so many of them reflect a permanently juvenile outlook on the world - sex bad, purity good, and it's so god damned cathartic when those whining teenagers get hacked up like cattle in a slaughterhouse, mkay? But at least your Saws and Final Destinations and countless remakes in 3D are honest with themselves about who they're screening for and what they're offering. The one thing that stymies Victor Salva's Rosewood Lane is it aspires to be more than an adolescent fantasy; it feels as if it was written by someone who wanted very badly to make a shameless piece of pandering, but just point blank refused to admit it to himself.

So heroine Sonny Blake (Rose McGowan) is a psychologist who's moved back to her family home to confront her childhood demons - not literally! That would be childish. Instead she and her ex reminisce about her violent, alcoholic father, because that's what grown-ups do. But the neighbourhood holds a dark secret - the local paperboy (Daniel Ross Owens) is a psychotic little Napoleon who doesn't take kindly to people treating him lightly, much less outsiders muscling in, and as the terrified neighbours explain he may even have had a hand in Sonny's father's death. Is the kid just an outcast, or something truly inhuman?

A good director could do something with this, like Todd Solondz with shocks and splatter. Not that Salva is a bad director. At the very least he's surrounded himself with a talented crew; Rosewood Lane is a fairly slick production, the neighbourhood in question looking pleasantly pastoral, the camerawork solid, the score serviceable. Nothing we haven't seen before, but all cinematic enough: it's the storytelling that's borderline incompetent. Salva never really gets a grip on any kind of nuance or deeper shading that might sell the idea of a demon paperboy as anything other than a stupefyingly misguided attempt at being different for the hell of it.

Salva gets the general concept that suburbia can be a veneer hiding all manner of nastiness, but he doesn't understand how to present that concept with any kind of subtlety. Or he just isn't interested in restraint. Either way, this is a film that wants to play with adult signifiers like loss, repression and childhood trauma - Sonny knows her father was not a happy man, yet she misses him now that he's dead - but tries to do it with dialogue and characterisation that's so on the nose it's more like a fist to the face. Characters state everything that's going on so baldly it starts to make The Room look like credible human drama in places - oh hi Sonny! A demon paperboy? You must be imagining things.

The film doesn't offer much in the way of fan service, either. Where Rosewood Lane fails to be scary or emotive in any cerebral sense its jump scares are even worse, if anything. Salva tries to pitch Sonny as consumed with mounting paranoia, but gives us way too little to go on and drags it out way too long. The results are unintentionally comical: the paperboy breaks in and rearranges her statues! He phones her talk show and recites nursery rhymes! Again, you could maybe get this kind of thing to work were you to try some kind of bone-dry post-modern approach, play up the slice-of-life aspect of small-town Americana, but there's nothing so considered here.

The violence is telegraphed from a mile away, characters don't let a single thought pass through their heads without blurting it out and on top of that Rosewood Lane frequently makes little to no sense. Beyond the basic horror movie lunacy of people acting like headless chickens in the face of mortal danger, plot threads get dropped abruptly and the Big Reveal (plus the subsequent epilogue) is a witless stab at ambiguity so inexplicable it makes your head hurt. Or a blatant out to be able to come up with a sequel, even a trilogy; Salva successfully relaunched his career when he came up with the Jeepers Creepers franchise, so one would assume he's always thinking several years ahead with any new idea.

McGowan tries very hard, but the script is so ludicrously reductive there's virtually nothing for the actress to latch on to that might make Sonny seem like a person, rather than a vehicle for Salva's confused ideas about the way human beings deal with survivor's guilt or victimisation. The supporting cast come off even worse - Sonny Marinelli as the ex stumbles awkwardly through one pantomime reaction shot after another, like some ghastly new remake of Dennis the Menace ("If that little rascal's hiding down in the basement I'ma break him in half!") and Ray Wise is wasted as one of the sceptical cops assigned to Sonny's case. 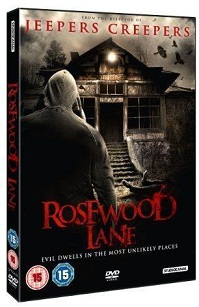 Studio Canal UK's DVD of Rosewood Lane is a predictable bare-bones disc - nothing too bad, but the kind of throwaway release you give a film you want shot of, one most people will have quietly forgotten a few months down the line. The DVD boots up from the Studio Canal logo into a simple static menu that actually looks fairly eye-catching - would that anything in the movie were so interesting. The film has been divided into eight chapter stops.

The picture is pretty run-of-the-mill; there's a reasonable amount of detail and very good colour balance but the image is still pretty soft, and darker scenes turn into the usual mess of deeper hues or uniform blackness. Rosewood Lane is definitely a film - as opposed to a generic made for cable production - but there are times when the line between the two seems fairly thin. This is a reasonable DVD, but nothing to justify paying full price for.

The regular stereo 2.0 track does the job (5.1 is also available). Audio is clear and perfectly audible - there's not much in Rosewood Lane to really test anyone's speakers but there's a decent range of tones on the score, enough for the bass to feel fairly punchy when the music tries to convince you things are getting exciting (it inevitably fails, but hey). Sadly Studio Canal are still sticking bare-bones releases out with no subtitles of any kind, so if any hearing impaired horror buffs want to give this DVD a shot they're out of luck.

The extras comprise the original theatrical trailer, which is even more ham-fisted than the feature itself - spoiling the best bits and promising way more than the film could possibly live up to. There's also a half-hour Making Of, which seems to be your usual promotional spot for TV networks to drum up some publicity. This is an utterly unremarkable parade of talking heads and clips reaffirming how awesome the shoot was from beginning to end, but it's competent enough and presumably someone will find it interesting.

Last but not least, it's difficult to be at all objective over any movie Salva has done or ever will do, knowing the director's criminal record (off to Google if you're unaware of it). Not meaning to judge or absolve him here, despite the severity of his offences - just to say that Rosewood Lane's awkward, clueless mangling of someone dealing with an abusive past could easily be seen as the work of a writer who doesn't really know his own mind. Regardless, it simply doesn't work, either as any kind of thoughtful, more heartfelt approach to horror or a straight up crowd-pleasing piece of popcorn. There's nothing to recommend about Rosewood Lane; pull down the shades, turn the lights out and lock the door behind you, then walk away and don't look back.

Do you feel this content is inappropriate or infringes upon your rights? Click here to report it, or see our DMCA policy.
Victor SalvaRose McGowanLin ShayeRay WiseLesley-Anne DownHorrorThriller