Decode THE SHINING With ROOM 237 Trailer 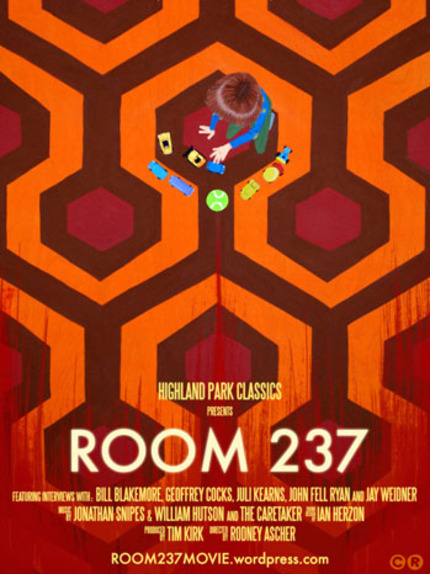 Rodney Ascher's acclaimed documentary Room 237 has been perplexing and entrancing cinephiles throughout its hugely successful festival run - the film screened at A-list events including Sundance, Cannes, Karlovy Vary, Melbourne, Locarno and Toronto - by embracing one of the most compelling stories going. You want a rabidly loyal fanbase? Looks no further than the adherents of Stanley Kubrick. You want fanaticism gone strange? Ask them about the meanings hidden within Kubrick's The Shining. That's exactly what Room 237 does.

In 1980 Stanley Kubrick released his classic horror film, THE SHINING. Over 30 years later, viewers are still struggling to understand its hidden meanings. Loved and hated by equal numbers, the film is considered a genre standard by many loyalists, while other viewers dismiss it as the lazy result of a legendary director working far below his talent level. In between these two poles, however, live the theories of ardent fans who are convinced they have decoded THE SHINING's secret messages regarding genocide, government conspiracy, and the nightmare that we call history. Ascher's ROOM 237 fuses fact and fiction through interviews with the fans and scholars who espouse these theories. Ideas of five devotees of the film with wildly different ideas about its true meaning are braided together in a kaleidoscopic deconstruction of the horror classic.

Intrigued? UK distributors Metrodome have released a trailer for the film which you can see below.