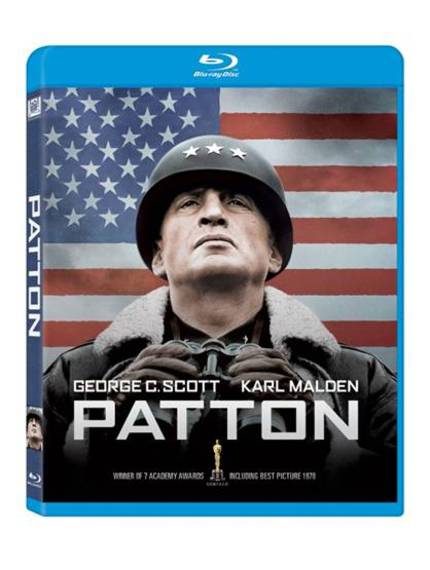 At long last, fans of classic cinema are getting the version of Patton on Blu-ray that we should have received in the first place!

For those not paying quite as close attention to such things (and they probably should!), there have actually been two previous high-def releases of the film (one a normal BD case, the other an anniversary Digibook), both using the same horrible transfer.

The original HD master suffered from pretty extreme futzing, so much so that it was as if all the main actors were wearing considerable amounts of silly putty on their face in lieu of makeup. This "waxy face" syndrome caused much consternation for many, and sullied what from the start should have been an extraordinary disc in the first place.

Fox has gone back to the drawing board, and is now promising a newly remastered image with this Blu-ray. They've hopefully gone back to the 65mm negative source, dialed back the digital trickery, and created a version of this film with appropriately magnificent quality, something that the large negative source is entirely capable of producing. If there's any justice, this should blow the other versions out of the water, just to mix a bit of military metaphor.

Here's the official spiel from the studio:

Winner of seven 1970 ACADEMY AWARDS® including Best Picture and Best Actor for George C. Scott,* Patton is a riveting portrayal of one of the twentieth century's greatest military geniuses. As rebellious as he was brilliant, George Patton (Scott) was the only general truly feared by the Nazis, yet his own volatile personality was the one enemy he could never defeat.

You can win your very own copy of the film by answering the following skill-testing question:
Please answer the question by making sure you follow ScreenAnarchy on Twitter (@ScreenAnarhcy), tweeting a link to this contest page, and copying the direct link of your tweet in our comment section below.

A winner will be chosen at random, but non-binding bonus points will be given to those that include a twitter pic holding up a copy of the previous version that they own on Blu-ray.

A winner will be chosen by November 1, so spread the word, and good luck!

Fox's Blu-ray release of Patton will be available in stores on November 6, 2012