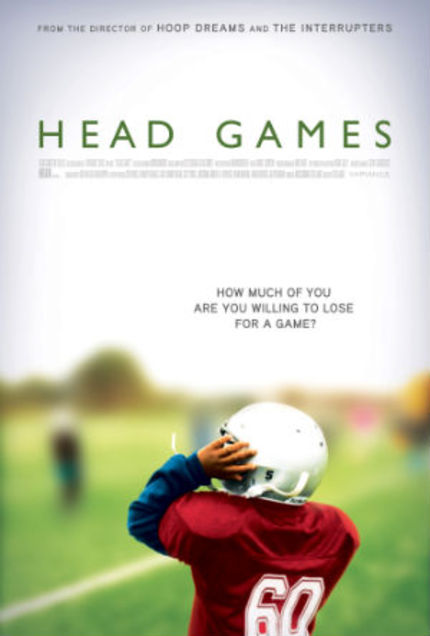 After a while, certain documentary filmmakers start to feel like reliable friends. No matter what the topic of conversation might be, I've grown to trust the films of Ken Burns, Werner Herzog, and Steve James. It doesn't matter what the subject of the film is; I already know that these guys will show the truth, remain invisible, and keep me entertained at the same time.

So while I'd probably have to admit that I have little to no interest in the topic of sports-related brain injuries, the simple fact is that when Steve James (director of Stevie, The Interrupters, and At the Death House Door) asks me for 90-some minutes, I'm more than happy to listen up. Mr. James is probably best-known for his award-winning Hoop Dreams, which still stands as one of the best sports documentaries I've ever seen, so it's not all that strange to see the man delve into another games-related issue. And if you think a documentary about concussions sounds like a big, fat bore, well, I'm here to tell you it's not.

Based on the book by former football player and professional wrestler Chris Nowinski, Head Games is sliced into three portions: one focuses on Chris' own misadventures with head injuries at Harvard and beyond, right up until the point when the NFL (finally) acknowledges the scope of the problem; the second segment looks at the prevalence of head injuries in the NHL, with former Flyers star Keith Primeau on hand as both a concussion survivor and the father of several very athletic children; the third section focuses on other sports and, most importantly, how parents can be made aware of how to protect their kids from long-term brain damage if and when a concussion does pop up.

Scattered across the three segments is a "pee wee" football league game, as if to plainly illustrate how much good kids can get out of organized sports, and there's also a great series of moments with Mr. Nowinski and his "brain surgeon" colleagues as they start to delve into the science behind the danger of brain injuries. Basically, Head Games gets a lot of worthwhile information out, and in a very humane and compelling fashion, throughout its 91 minutes. It may seem a little strange that we'd need to watch a feature-length documentary to realize that, hey, brain injuries are dangerous, but perhaps we've all been taking "concussions" just a little too lightly all these years.

Sports fans and supporters of the medicinal arts will no doubt find a lot to enjoy in Head Games, but it should probably be required viewing for parents of children who play "hard-contact" sports, to say nothing of those kids themselves.

Head Games opens in New York and Los Angeles on September 21; it will expand across the U.S. in October.