Weinberg Reviews BRANDED, AKA "WTF Did I Just Watch?" 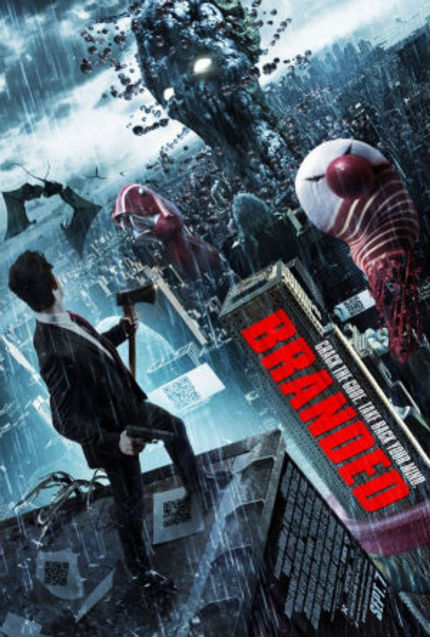 Every few years you stumble across something like Branded: A tonally retarded, editorially misshapen, and thoroughly amateurish film that -- here's the best part -- has delusions of insight, intelligence, and originality. OK, to be fair, this arcane Russian production is pretty original; I'l give it that. It's not every day you see an ostensible satire that's never funny on purpose but is frequently hilarious by accident, let alone one with wacky religious subtext, a short film with Max Von Sydow wedged inside, and giant balloon-like invisible creatures that grow out of peoples' necks.

Written and directed by newcomers Jamie Bradshaw and Aleksandr Dulerayn, Branded is social commentary and a satire of advertising as written by a pair of first year sociology majors who haven't taken any film classes yet. The plot, I believe, is about a marketing prodigy (Ed Stoppard) who was struck by lightning (aka branded!) as a child but grows up to work for Jeffrey Tambor, who is an American spy in Russia to pose as a powerful advertising executive. I think. (The spy subplot is only one of a dozen factors the co-writers introduce and then fail to explain why.) There's a love interest, of course, because Branded has a lot of running time to fill between its few moments of (at least) visual cleverness, and our lead actress is Leelee Sobieski, who seems to approach each scene as if she just spun a roulette wheel of emotions. "Bemused concern" pops up once, and she uses this expression for about 25 consecutive minutes.

At its core, and separated from all its intentional weirdness and painful pacing, Branded is about how advertising, marketing, and "name brands" have taken over humanity. The frequent, painful, and endless dialogue volleys sound like nothing more than a pair of self-important college kids who have just now realized that advertising is an insidious threat (!) to the innately free-thinking humans of this sad planet! That fast food restaurants will go to devious lengths to help sell their new cheeseburger! That we're all just faceless consumers who need to wriggle free of the iron fist of marketing! It's all so broad, obvious, and pedantic, but the themes are wedged into a visual package that aims to distract you with ugly cinematography, clumsy editing, laughable dialogue, and truly bizarre performances.

Tucked away in the film's morass of half-cooked ideas are two novel concepts: 1. That a godlike marketing guru could hatch a plan to not only make fast food palatable, but to make fat beautiful again. If you change the consumer's perspective, you create a new sales pitch. This is a cool idea that's tossed into the film as part of a Max Von Sydow subplot that, while fun to observe, has basically no bearing on the plot of Branded. The second cool idea, that a "touched" genius can somehow see physical manifestations of consumer desire -- example: kids who crave fast food have giant clown-colored leeches growing from their neck -- is remanded to the third act of the film, which means it arrives way too late.

Branded is essentially those two potentially cool ideas dropped into a 105-minute film and left to fend for themselves amidst a ceaseless array of bad filmmaking choices. While clearly a satire, Branded makes no clear point about advertising, and while its intentional moments of humor flop audibly onto the screen, the film is packed with stuff so silly and audacious, it's hard not to laugh. Branded is film school pretentious and stupidly inept at the same time, and while the flick certainly has enough visual weirdness to fill a provocative trailer -- oh, the insidious nature of advertising! -- it's destined to become a cult classic in the realm of "WTF did I just watch?"

Branded opens today in theaters across the U.S. Check the official site for more information.