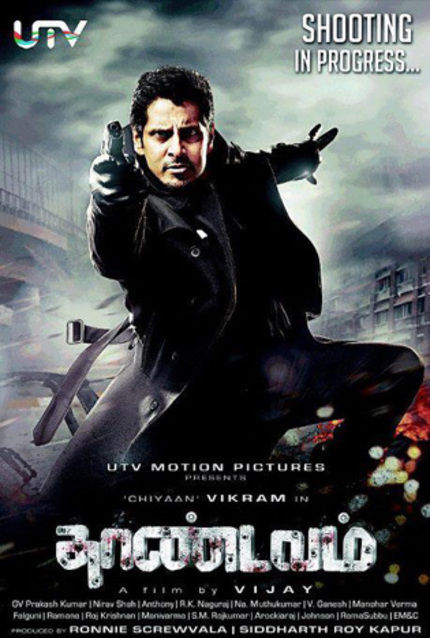 It's only been a couple of years since Ronnie Screwvala took his multimedia conglomerate, UTV Motion Pictures, into the south of India. UTV is the biggest studio in India, and in 2011, the controlling stake in the company's stock was purchased by The Walt Disney Corporation. This transition has really seemed to up the speed at which UTV seeks to take over all of Indian cinema, not just the Hindi film industry, on which they've had a very firm grip for the better part of a decade.

In the service of that goal, they've released several big budget features with big South Indian stars including Arya (Naan Kadavul) in Vettai, Kamal Hassan in Unnaipol Oruvan, and Vikram in last year's breakout hit, Deiva Thirumagal. The last of those features has been covered on these pages because of its ridiculous trailer and crazy plot, but nonetheless, it made a lot of money, and as such, UTV is wrapping up production on another Vikram film, Thaandavam.

Thaandavam opens this Friday, and even though I had every intention of bringing the trailer to the world sooner, nothing I've seen so far has really gotten me all that excited. The trailer is really flat, in spite of an lead actor who leaves no scenery unchewed, and this is a bit disappointing. I'm fairly certain I'm still going to review it this weekend, but I am tempering my expectations. Am I being too hard on it? Decide for yourself: