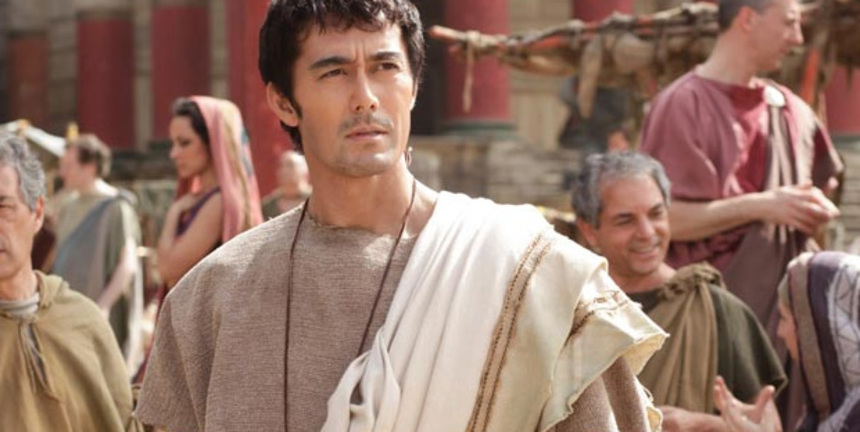 The TIFF programme guide breathlessly extolled the success of Thermae Romae in its native country, declaring the film, based on an extremely popular manga, "Japan's biggest box office hit of the year".

This goes to prove a couple things - sometimes, what the masses choose to be their hit of the summer can be completely underwhelming. Secondly, the Japanese really do have a crazy fascination with sitting naked in a tub.

I grant you outright that Thermae Romae is tops in its class in time traveling bathing films. Sure, Hot Tub Time Machine touched on reasonably similar themes, and TR lacks both Cripsin Glover and Chevy Chase, but the Japanese film embraces toilet humour in a way that's almost adorable.

The film begins in Ancient rome, when a hapless designer of steam baths is sucked through a time portal to modern day Japan, where as a bather-out-of-water he must come to terms with automatic douching toilets, incense candles and personal bathtubs.

Flipping back and forth in time, our protagonist takes the lessons learned from another culture that also obsesses about baths and brings breakthroughs to his ancient Italian cohorts.

Along the way, there are moments of light amusement, it must be admitted. Still, the comedy is so broad, the conceit so arch, and the plot line so very predictable that it's hard to really invest much in the film.

Some of the set pieces are suitably epic, and one almost adapts to the strangeness of a bunch of Romans shouting at each other in garbled Latin and staccato Japanese. Naturally, English audiences take it without question when our toga-wearing actors prance about in Roman times speaking various forms of British - the slaves with a fine Cockney drawl, the Aristocrats speaking in Etonian cadence. In fact, the Japanese-as-Roman shtick is the least weird part of the entire film, and after a while you just kind of take it for granted.

The film, then, is interesting insofar as it shows just what buttons the general Japanese audience likes to have pushed in order to create boffo box office returns. Just as I'd hate to be defined by the success of a Kardashian or random reality show, it'd be unfair to paint the entire culture based on what constituted for the majority an uproariously funny film. Thermae Romae is at best a pleasant dip into what another culture finds to be hysterically funny, and while it occasionally bubbles with charm, it's really not nearly as refreshing a soak as it should be.