TIFF 2012 Review: EVERYBODY HAS A PLAN Offers A Double Dose Of Viggo 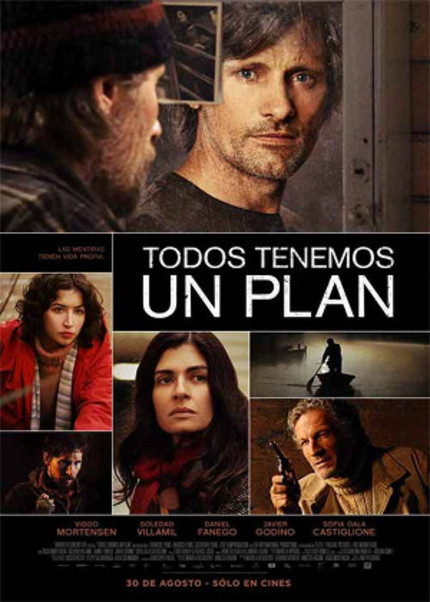 As if performing in a foreign language isn't enough of a challenge, Ana Piterbarg's Argentinian thriller Everybody Has A Plan features Viggo Mortensen playing not one but two roles entirely in Spanish. It's a casting choice from Piterbarg that - if it had failed - would amount to nothing more than a flashy stunt but Mortensen delivers a tour de force performance and though the film has some obvious flaws Piterbarg demonstrates that she has plenty of skills to bring to the table herself.

Mortensen plays identical twin brothers Agustin and Pedro, brothers who - despite their physical similarity - could not possibly be more different. Agustin lives a comfortable life in Buenos Aries, a doctor with a beautiful wife and a world of possibility open to him. The only down side to Agustin's life is his wife's determination to adopt a child, a child that Agustin secretly feels unable to care for and does not want. Pedro? Pedro lives in a ramshackle shack on a remote island where he keeps bees between coughing fits brought on by a terminal case of lung cancer, augmenting his income by taking part in a kidnapping ring.

When a kidnapping goes wrong, and with his health slipping fast, Pedro pays a visit to his long estranged brother with a simple request. Either help him by curing his cancer or help him by ending his life. And so Agustin finds himself presented with a unique opportunity to leave his comfortable but stifling life behind and slip into an entirely different world.

The strengths of Piterbarg's debut are obvious. A handsomely constructed film filled with gorgeous environments and compelling performances, Everybody Has A Plan is an immersive experience set in a rich and compelling world. The premise is fascinating and Mortensen, seemingly perfectly comfortable working in Spanish - though I'll leave it to those fluent in the language to comment on his skill with it - delivers a strong, nuanced performance. Agustin is fascinating to watch as he attempts to shed his past life and adopt another.

The film's weakness, however, is equally obvious. While Agustin may not have understood what sort of world he was walking into by taking Pedro's place he learns enough very quickly to leave the audience wondering why he would ever stay. Why would this man - who has already demonstrated a pathological aversion to conflict at this point - choose to stay after a violent greeting from locals who (correctly) believe Pedro is responsible for the disappearance of their father? Why would he choose to stay after being beaten? After the police come knocking? There's nothing holding Agustin where he is, so why not simply go and be Pedro somewhere else? Similarly, the actions of Pedro's partner when he begins to suspect the identity switch make little sense and seem without purpose. The actions and motivations of characters frequently seem to be at odds, a scenario which undercuts the strength of Mortensen's dual performance.

The end result is a film with an enormous amount of promise and ample skills on display both behind and in front of the camera but which never fully capitalizes on that promise. Everybody Has A Plan - and odd choice for a title given that Agustin very clearly does not - thus ends as a curiosity piece, one worth seeking out for Mortensen and one which promises good things in the future from Piterbarg without fully delivering in the present.

Everybody Has a Plan

More about Everybody Has A Plan