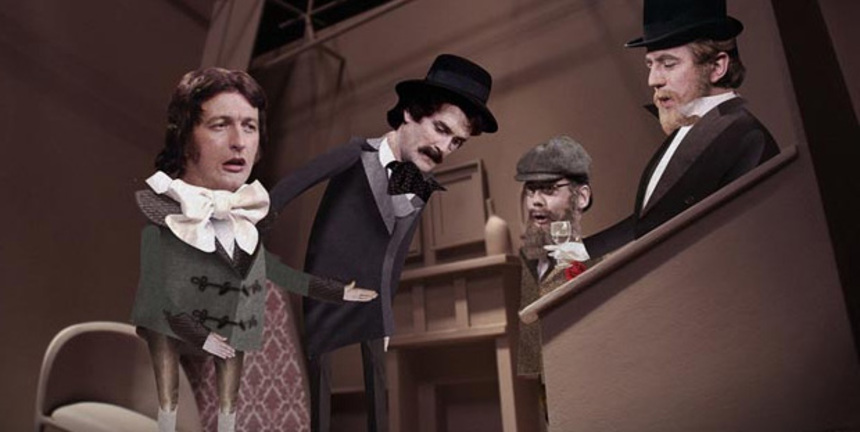 Graham Chapman has been dead for almost a quarter century, but that hasn't stopped him from starring in a brand new film. If that weren't notable enough, this work is also the closest we'll probably ever get to a legitimate Monty Python Reunion.

Back even earlier, Chapman wrote (well, co-wrote) his so-called "Liars Autobiography", a series of preposterous tales loosely strung together into a kind of mad memoir. Beneath the cheekiness and outright falsehoods there were elements that did elucidate the complexities of Chapman's life, from his role as a medical student who gave it up to wear women's dresses on the BBC as part of a sketch comedy team, to reactions to his admission to all and sundry that he was a man that liked to sleep with other men, preferably men much younger, swarthier, and with better mustaches than himself.

Chapman recorded himself reading excerpts of this book, and this became the basis for this newly produced animated 3D Pythonganza. Among the director's credited with the film is Bill Jones, son of the Welshman of the group Terry (not to be confused with the Gilliam of the group, also a form of Terry). Nepotism or no, it certainly couldn't have hurt to have the product of the sperm of one of the founding members of the Montys play as signficant a role as he did, for it allowed the likes of Cleese, Jones Palin and Gilliam to add their voice, literally, to the proceedings.

I assume that Eric Idle is either hated by the rest of them for making them so much money on Broadway, or he was busy practicing saying "life's a piece of shit" in front of a Billion people during the closing ceremonies of the Olympics.

We may never know.

Since the book itself is written in the style of a mind-shattered lunatic, it seems fitting that a variety of animated styles be used to elucidate the tale. We get paper cutout-like images, sweeping 3D vistas, line drawn styles, animé-ish flourishes, all roughly telling a most fabricated story of a boy growing up to be a funnyman. Interspersed are a number of interview clips, stage performances, and other "real life" moments that further provide context for Mr. Chapman's tall tale.

The switches in style are both the film's major advantage, and its most exhausting element. The 3D process isn't exactly critical for your enjoyment (or lack thereof), and there are at times it does open up the imagery nicely. Still, with a wide variety of production styles (each segment was the responsibility of a different animation firm), one's millage varies in terms of quality of presentation moment to moment.

The film is often surreal, but lacks the real punch that Gilliam's own contributions to the Flying Circus show would often provide. The humour throughout is a bit flat, for what was shocking in 1980 is certainly old hat by now. Perhaps this is a good thing, that the anxieties and neurotic self-loathing that made Chapman hide his proclivities are for most of the modern audience that will stomach this film entirely comfortable with our world view. Frankly, anybody who has issues with what gave him pleasure still sees the cinematic Brian as a pariah and a very naughty boy.

Thus, this "untrue story" serves at the toe of some footnote to the greater story of Python, a mere trifle that's unique in its presentation, but hardly of worth to any but the most hardcore of Gumby lads and lasses. For the faithful, those that can quote of fjords that are pined for,  larches that are pointed at or cheeks that are slapped by fish, there's enough here to cause a wry smile or the occasional guffaw.

For the uninitiated, I recommend highly you skip this work in favour of something much more palatable, like, say, every single episode of the television show, watched on repeat, followed by the major films, the minor ones, the live show, most of Fawlty Towers, The Ruttles film, the complete works of Terry Gilliam (including, of course, Jaberwocky), all of the original records played on a turntable, the original Frost Report shows, the Do Not Adjust Your Set shows, A Fish Called Wanda, and, of course, everything else any other member of Python performed.

Once you've done all that (like, I've no doubt, a very great many of our dear readers), it's worth giving Chapman's Liar's Autobiography a once over.