The SILENT HILL: REVELATION 3D Poster Reveals Ehm... That The Film Is In 3D 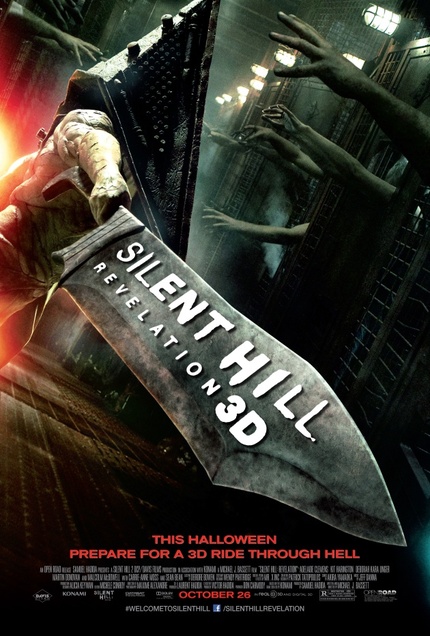 Back in July we posted the trailer to "Silent Hill: Revelation 3D", the sequel to Christophe Gans' videogame-to-movie adaptation "Silent Hill".

What was successful about the first film worked because it kept the mood, visual design and especially its SOUND design close to the very creepy adventures it was based on. Judging by the trailer (included below) the sequel kinda tries to reach that same vibe, although you wouldn't be able to say so from looking at the new poster above, which distributor Open Road Films has just released.

I mean, seriously? This onesheet looks more like a videogame than the videogame did. All I get from this picture is that the movie will be (gasp) in 3D, and that it may feature some seriously cheap-looking cgi zombies.
Fans of the games or the first movie will be the only ones recognizing the monster, and they will probably think that this looks nowhere near as atmospheric as, well... the games or the first movie.

Mind you, the sequel itself is directed by Michael J. Bassett who does possess talent. Judging by the trailer the script uses different locales from several of the games and some of the more bizarre monsters in that franchise as well, so this could actually get interesting. But this poster? Ugh. Fail.
Tweet Post Submit

Do you feel this content is inappropriate or infringes upon your rights? Click here to report it, or see our DMCA policy.
Michael J. BassettLaurent HadidaAdelaide ClemensKit HaringtonCarrie-Anne MossSean BeanAdventureDramaHorror