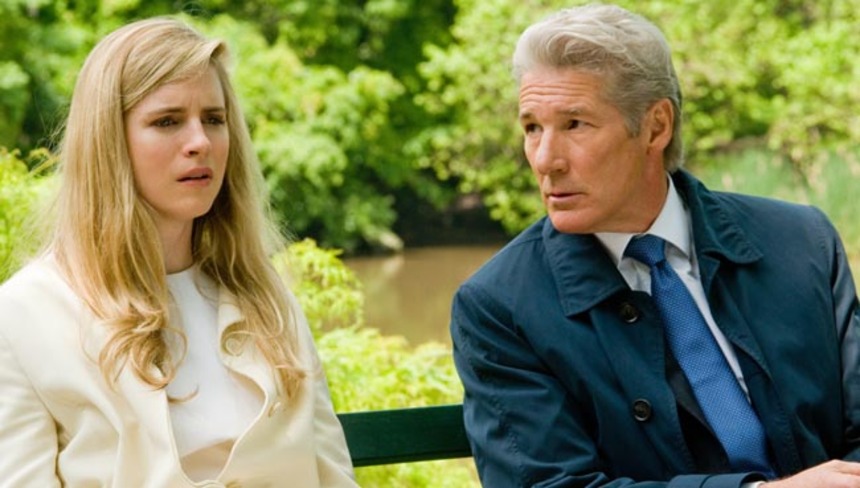 They say cinematic trends are a snapshot of our times, and that certainly seems to be the case with the uptick of financial services dramas we've seen of late. Last year it was J.C. Chandor's Margin Call which made a splash at Sundance and has shown some decent legs at the specialty box office. That spot this year is being filled by Arbitrage, Nicholas Jarecki's hedge fund crime thriller. While it stops short of being insightful commentary on the plight of the 99%, it does provide Richard Gere with the meatiest role he's had in years. It's a task he is more than apt to tackle, piloting the picture through its intense script towards potential awards consideration.

Gere plays Robert Miller, a Wall Street oracle and patriarch of the Miller Financial family business. Heir to the empire is daughter Brooke, played in another stellar performance by Brit Marling. Brooke holds the family's honest reputation in the highest regard -- a reputation, it turns out, that's in jeopardy due to some creative mathematics employed by Robert in the pursuit of a pending sale of the company. Robert's scruples are put in an even harsher light when we meet his European artist mistress (supermodel Laetitia Casta). Things get really complicated when an accident leaves the mistress dead. Faced with the prospect of destroying his family and derailing the merger, Robert must decide if he will stay and face the music, or flee and rely on his status amongst the wealthy elite to see him through any trouble that might arise.

While Marling, Susan Sarandon (as the wife), and Tim Roth (the grizzled detective) all turn in great performances, this is undoubtedly the Richard Gere show. Robert Miller might not be the most nuanced character to ever grace the screen, but Gere plays the confident-in-the-face-of-certain-doom silver fox to perfection. An extra piece of praise should be saved for Nate Parker, whose Jimmy Grant stands in for the little man, threatening to take the fall for the untouchable elite.

Playing the role of both writer and director, Jarecki has crafted a taut thriller that focuses on the journey of his characters instead of getting hung up on the intricacies of the high-finance plot. While the theme of the wealth gap and elite privilege are certainly present in the story's DNA, Jarecki resists any urge to make bold political statements. Instead, Jarecki focuses on building interesting characters, delivering an intense thriller, and telling a solid story.

This review was originally posted as part of ScreenAnarchy's coverage of Sundance 2012. Arbitrage opens wide on Friday, September 14 from Lionsgate/Roadside.

Do you feel this content is inappropriate or infringes upon your rights? Click here to report it, or see our DMCA policy.
Nicholas JareckiRichard GereSusan SarandonTim RothBrit MarlingDramaThriller