For a Good Time, Call... Director Jamie Travis for a Quickie Chat 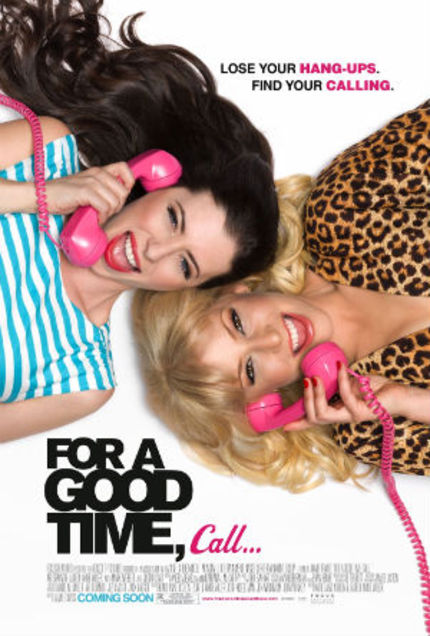 It's a beautiful day in Vancouver, BC, when I get a call from Jamie Travis, director of the new movie For a Good Time, Call... .

Speaking from a hotel in Los Angeles, Jamie sounds excited and somewhat weary after the flurry of press activity accompanying the film's release. "I just did the DVD commentary," he says. "It's very exciting, something I've never done before."

Before landing this, his first feature (a hit at this year's Sundance Film Festival, where it was purchased for $2 million), Travis directed shorts (he had three programmed at TIFF in 2006) and played his hand at commercial work.

It is swiftly determined that in addition to sharing a city, ("I lived in Vancouver for 27 years," he says. "I'm a qualified Vancouverite.") we are both graduates from the same film department at the University of British Columbia.

"I'm sure you're on their radar. You may be their biggest success," I offer.

"Yes. I'm their poster boy." Jamie has a dry, warm tone about him. He sounds like fun.

Yes. What are you wearing? [Laughs.]

You know, it's funny. People tend to talk to the girls about phone sex. One of the films co-writers, Katie Naylon, used to be a phone sex operator. She worked out of her dorm at Florida State University. I never get the phone sex questions. 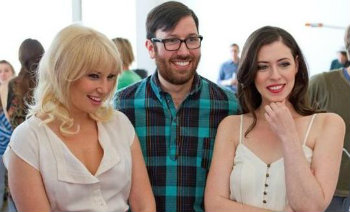 Which begs the question, 'When you came on board with this project, what kind of research did you have to do?'

The girls and I have been asked this a fair bit, and I don't know if it was by choice or by design but none of us really did much research into phone sex.

When I read the script, it was so clearly far off from a realistic portrayal of phone sex. It had a little bit, but if it had more it would have been a much darker movie and I felt that its strength was how bright and sweet and unusually cheery it is. For me, that's reverse of the research with Katie, who had these great stories about her phone sex past that she tells through the prism of comedy. Katie has a very wry tone when it comes to anything, so it was more her perspective on her past. That was more useful than calling phone sex lines or talking to phone sex operators. The strength of the script and the film was that there was a level of fantasy, and it felt counter-intuitive to do research.

Given the subject matter, there's potential for a film like this to get pigeonholed as a 'gross-out' comedy, which I don't think it is. What are the lines in the sand? What's too much?

We discovered that line as we went along. I knew from the moment I read the script that that balance of sweetness and raunch was going to be important for making this movie the best version that it could be.

Yes, I found the balance here interesting. It never struck me as coarse, the way other films or 'gross out movies' might. 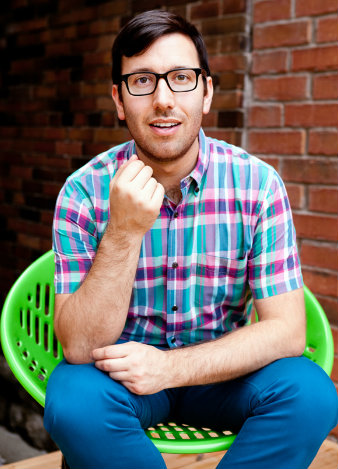 I don't think we ever set out to make a gross-out movie. I certainly didn't.

I mean, I guess the splashing of pee in one's face could be seen as a gross-out moment, but I always thought about it in narrative terms, as 'the unforgivable act.' When someone spills their own urine in your face, how do you get past that? I always looked at it from the character's perspective instead of the gross-out perspective.

In terms of 'gross-out' throughout the movie, and especially with respect to phone sex, I dunno... I don't look at anything and think it's gross. I feel like we all had a very sex-positive spirit when we made the film, and we certainly don't want to shame people into thinking that sex is bad or that phone sex is bad.

I don't feel like we passed a critical eye on that. I dunno... Did you think it was a gross out movie?

Yeah. I've read reviews that accuse us of doing that, but that never was really our intention. For me, when I first read the script, I thought, 'This is how my girlfriends speak. None of this feels that dirty to me.' None of it's shocking to me. It's funny to me! We didn't intend to shock and dismay.

Well, that's what I'm saying. It was funny and shocking because of the dialogue, not because of any semen-based hair product gags. Maybe we've all become enured to that kind of thing in the last 10 or 15 years.

Moving on: I am a Jew. This movie has a lot of Jew-humor.

What's your relationship with the Tribe? Vancouver is a goyishe town. 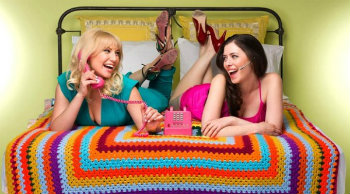 I'm half Jewish (on the wrong side). I've always found, especially as my life has gravitated towards L.A. [laughs] that I found myself consistently finding, understanding, and liking other Jew and half-Jews that are on the right side, or the wrong side. Lauren and Ari are two very nice, Jewish girls, and so it's kind of just our sense of humor to push the Jewy aspect of things.

It's funny, that line, when the bible-thumper is leaving and you hear her quoting the bible as she leaves, and you hear Ari off-screen saying 'Yeah, yeah. We're Jews!' That was added very recently in ADR.

It's funny, I've been watching that joke with audiences and it totally plays! People like Jew-jokes.

Who knew? I could relate to that. I've been bible-thumped. When I was a little kid Jehovah's Witnesses used to come to the house with their free Watchtower magazines and I'd be like, 'I'm Jewish. I don't think you want me.' I can't think of a clever segue: Your film features some very interesting masturbator cameos.

During the casting process, how does one go about approaching potential masturbators?

Well, with Seth it was easy because he's married to Lauren. [Laughs]

This film was so low-budget and we made it so quickly that we had to call in a lot of favors. Certain people came from our casting directors, like Ken Marino - who I am such a huge fan of. Kevin Smith is friends with Lauren and Seth; he responded to a quick email and five minutes later he was in. It was surprisingly easy to get our cameos together. 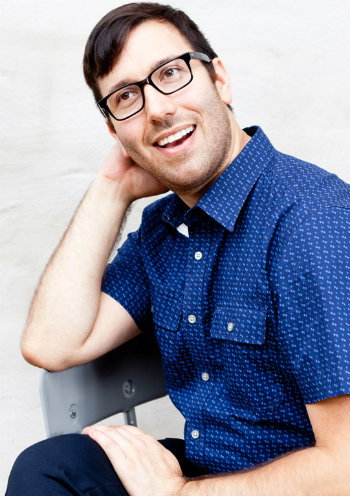 They are hilarious. As an audience member that was the most explicit -

So they all brought their own unique technique.

Wow, that's incredible. I hope that makes it into the DVD commentary. Let's taIk a little about getting this movie made. I read a quote from Lauren Miller where she mentioned that the script had numerous re-writes and endless studio meetings...

Was there a lot, or an extra level, of scrutiny with this film because it's a female-driven buddy comedy?

The girls spent years trying to make this film in the studio system, before Bridesmaids, and consistently people in Hollywood loved the script but didn't think there was a market for R-rated female comedy. Then Bridesmaids hit and that showed people that you can make money in this genre.

By that point though, Lauren had decided that she was going to star in it herself. If she was ever going to have an acting career, this was the opportunity. So they decided to make it the independent way.

When I first read the script, it was a much broader version of what you see: They had taken it in a very 'studio' direction because they had been trying to sell it that way. After [Executive Producer] Ari and I came on board we spent over a month reworking the script line by line, scene by scene, making it a much more grounded version of what it was. Something else, was that the grounded version was much closer to Lauren and Katie's very first draft of the script. 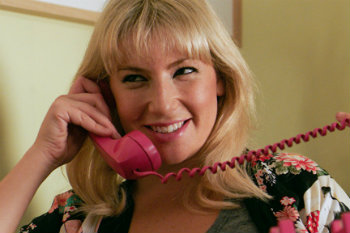 I remember asking if I could read the first draft, which had so much heart and so much more sweetness than the draft I [initially] read. There were broad elements, like the girls driving around in some dick-shaped car, which had, of course, come from the studio wanting to make it bigger and bigger and bigger.

What I saw from the first draft that they ever wrote was that at one point it was a really sweet story about female friendship, and specifically about their friendship. It came from a very, very, honest place. So that month of re-writes was really about making it the most honest version of itself. And the funniest.

I'd like to commend you for that. It was so refreshing to see women relate to each other without the cattiness, or fighting over the affections of a man. I certainly don't relate to that and I tend to roll my eyes at those sorts of caricatures of women who just don't exist in my world.

We get to see a real intimacy played out in their friendship, which was so positive and lovely. I think it's very telling then, isn't it, that you're saying that this was an element that was a strong part of their original script. And it works.

We all bonded over our mutual appreciation of female buddy movies from the 1980s, like Outrageous Fortune and Big Business. I think about the kind of characters I saw when I was a kid, roles Goldie Hawn played; big female characters that you don't see anymore.

So what's next for you? Any inclination to come back here and work in the Canadian system?

I would do a Zambian film if it came to me and was interesting. It doesn't matter whether it's Canada or the US or Morocco.

Hollywood has a real infrastructure for bringing talented people together. I have felt very pursued by Hollywood for some time, in a way that I have not felt in Canada. Had I written my own script and tried to get it made, and still in the future if I did that, it could potentially get made in the Canadian system. It's so hard to say.

You went from having three short films programmed at TIFF in 2006 and now here you are with a much buzzed about indie feature. You are a beacon of hope for legions of short film filmmakers.

Whenever I get asked about advice for young filmmakers, I always say 'Make short films. Don't make it all about the feature.' I was lucky because I never had ideas for feature films that I felt were ready to go, or that I really wanted to develop to the point of production. All my ideas happened to be short, which happened to be a really great thing for me because it enabled me to develop a voice and a style before I even got to my first feature.

It's interesting talking to you and hearing about your experience and perspective. You don't seem to share the path of the typical Canadian director.

No, I don't. When I made films in Canada, I really did it by my own rules. I'm sure I found some money through the Arts Council, but the whole process of making a film through Telefilm is something that I've never gone through. And I don't know if I will.