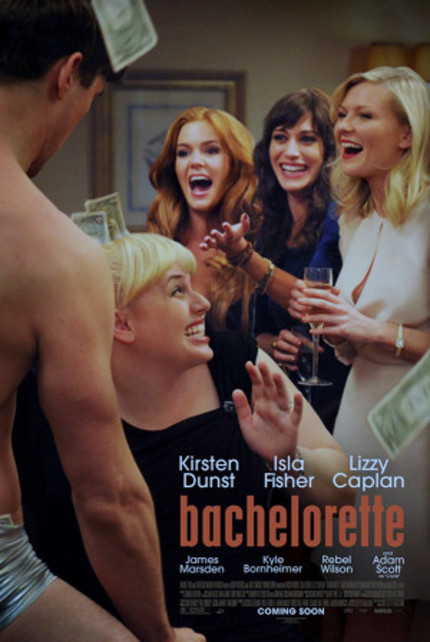 Let's get one slightly pertinent but ultimately unimportant thing out of the way before we begin: the lovably lewd new comedy known as Bachelorette is based on a play from 2008, which means it predates the smash hit Bridesmaids by at least a year or two. Having seen both of these pre-nuptial farces, I can assert that neither movie is a "rip-off" of the other. My guess is that the well-deserved success of Bridesmaids helped get Leslye Headland's stage work transformed into a movie, which is how things are supposed to work, and let's face it: We can always stand to see a few more comedies that focus mainly on females. Especially if they're this freaking funny.

Bachelorette is little more than a feature-length sitcom, and that's not meant as a criticism, especially considering that the flick is A) well-paced, B) very well-cast. and C) frequently, ferociously, and refreshingly profane, prurient, vulgar, salacious -- pick your favorite adjective. Combine a legitimately funny screenplay, several actors who are clearly hungry / able to deliver the laughs, and a few moments of earnest warmth and insight, and it's easy to see why this quick and dirty comedy played so well at Sundance: It lets the ladies cut loose in exceedingly "smutty" fashion, but their potty-mouthed characterizations are not meant as cutesy novelty items; they're just funny women given lots of funny (and very grown-up) things to do.

Our leads are Kirsten Dunst, Lizzy Caplan and Isla Fisher as a trio of high school pals who are reuniting for the wedding of a mutual friend. The four of them were known as "the bitchfaces" back in school, and it's not too tough to see why: one's an icy control freak, one's a directionless misfit, the other's a dippy doll. And the bride (Rebel Wilson)? She's a big gal, kinda weird, and, well, not all that likable. But, of course, those are just the surface-level exteriors, and the actresses have no problem shifting between smart, sexy, silly, or sweet when the movie calls for it. Sort of an all-in-one-night escapade in the realm of After Hours or a very R-rated Adventures in Babysitting, Bachelorette follows our three anti-heroines as they hit New York City in order to repair the wedding dress they stupidly destroyed.

The ladies bounce from laundromat to street corner to strip club (don't ask), and while this is most assuredly a female-focused movie, that doesn't mean the menfolk don't get a few moments to shine. Adam Scott (always funny, doubly so here), James Marsden (enjoyably smug and horny), and Kyle Bornheimer (a very affable stoner) provide ample support in several scenes, but Bachelorette is at its best when the main trio takes center stage. Ms. Dunst seems to be having fun poking fun at her icy side; Lizzy Caplan brings a welcome sense of honesty to a character that could have been all eyerolls and nasty derision; and Isla Fisher is simply adorable as the ditz. The innately funny redhead doesn't rely on simple "dumb hottie" jokes; some of the funniest bits of banter in Bachelorette are punctuated by Fisher's weird asides and enthusiastic silliness. Plus, fine, she's so damn gorgeous to look at.

If Bachelorette takes a quick but distinct detour into melodrama toward the end of Act II, and it does, that can be forgiven rather easily: Writer/director Headland clearly likes these characters, and wants to ground their maniacal evening in some small place of reality. For a farce this joyously awash in raunchy language, it actually does have a few things to say about friendship between females, and, speaking only as one non-female, it does it very well. A few of the dramatic moments seem tossed in rather quickly, while others, like a great scene between Caplan and Scott, are legitimately touching. Best of all, the "life lesson" moments are handled quickly, and then we're treated to a very kinetic (and well-cut!) crescendo of "wedding prep" screwball intensity in which Ms. Dunst absolutely shines.

Call it a step forward for females in indie cinema or call it just a simple 90-minute sex farce, but Bachelorette is funnier than both Hangover flicks jammed together, and I hope that doesn't read like a DVD blurb. I mean it.

Bachelorette is now available in the U.S. via various Video On Demand platforms. It opens in limited theatrical release on September 7. Check the official site for more information.