Review: PREMIUM RUSH is a Shot of Sugar Directly Into the Bloodstream 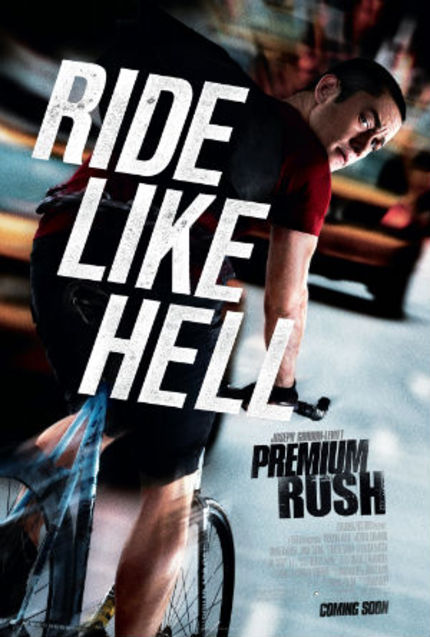 So this is why New Yorkers hate bicycle messengers...

David Koepp's best films as a director -- A Stir of Echoes and Secret Window -- are linked by vibrant lead performances and a kinetic sense of contagious energy that thrums off the screen, making even the most ridiculous premise sound almost credible, at least until the end credits roll.

Premium Rush doesn't quite get there, despite an insanely over the top turn by Michael Shannon as a quintessentially New York dinosaur of a villain who doesn't know that he's stepped into a tar pit and will soon become extinct. Shannon doesn't so much chew scenery as inhale it, breathing fire through his nostrils and blowing disdain out his ears.

The film stretches its thin premise past the breaking point of credulity right about its sixth minute, as bike messenger Wilee (Joseph Gordon-Levitt) -- yes, as in Wile E. Coyote -- pauses on a breakneck mission to deliver a letter in murderously-thick Manhattan traffic to contemplate which path through traffic he should take, complete with computer graphics laid on top, and hilariously disastrous outcomes forecast for the wrong decision.

Add that to the film's opening image, as Wilee floats majestically through the air in slow motion, sans bike, headed to a hard fall, set to a song by The Who, and then the sudden pop into a corner of the frame a digital clock ticking backward, and the action moving in reverse ... and there's no doubt that what we have here is a movie that is not terribly concerned about the overly strict rules of reality, and is, instead, occupied with creating a rush akin to watching a Chuck Jones cartoon for the first time. 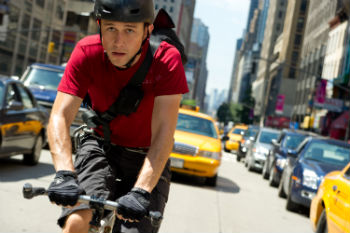 Unfortunately, Koepp can't resist the temptation to ladle on a little goopy sentimentality, which, while heartfelt and honestly acted, is really besides the point of the movie, and ultimately drags it a bit too close to hum-drum melodrama during its rare, slower moments. Also, the prevelance of computer-assisted graphics ensures that even the scenes in which life and limbs were genuinely risked are assumed to be entirely computer-generated, for which I suggest that you wait a few minutes after the end credits begin to roll before assuming that everything was done in post-production.

The plot is constructed merely as an excuse to follow Wilee as he zips around Manhattan, dodging cars, trucks, buses, pedestrians, traffic lights, and the NYPD Bike Patrol, whose lone representative (Christopher Place) comes across as an unlikely, courageous, and entirely sympathetic victim. (It's one of the few times I can remember rooting for the hero to get away and for the cop to catch him.)

Wilee is in love with Vanessa (Dania Ramirez) and in competition with Manny (Wolé Parks), both fellow bike messengers. Wilee heads uptown for a pick-up from Vanessa's roommate Nima (Jamie Chung), with instructions that the sealed envelope must be delivered to Chinatown within 90 minutes -- or, about the running time of the movie.

That seems like a great set-up for a movie taking place in (basically) real time, but it's not long before the narrative dips back, roars forward, pauses, inches in one direction and then reverses, as though it itself were a bicycle perched precariously on an ever-moving ledge. 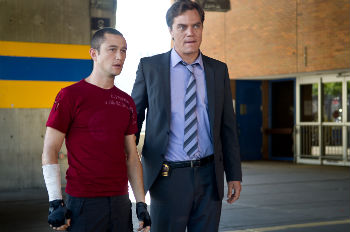 Gordon-Levitt makes for a likable, personable lead, while Ramirez makes good use of her screen time, as do Parks and Chung, the latter affecting an overstated Chinese accent to fit the ridiculous, stereotypical Chinatown aspect of the plot, so, in a strange way, it seems appropriate, because the entire movie trades on ridiculous stereotypes.

And none of those stereotypes is more ridiculous, nor more entertaining, than Michael Shannon's Bobby Monday, who tries to hide his identity by calling himself Forrest J. Ackerman. Shannon commits completely to the character, an oaf with a hair-trigger temper who is also uncommonly polite.

The movie is no more than a quick shot of sugar, injected directly into the bloodstream, but for as long as the rush lasts, it's all good.