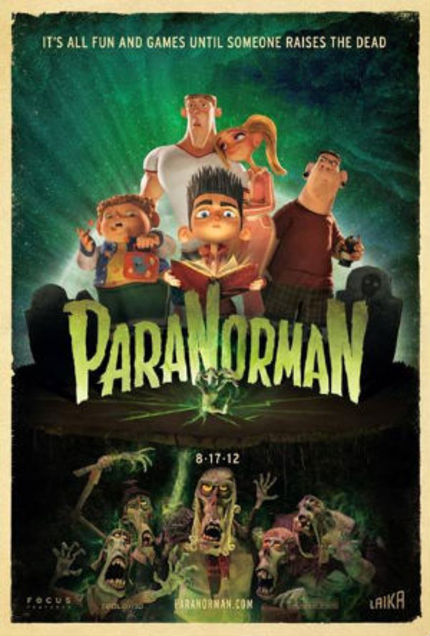 Quickly moving beyond its opening 'Grindhouse for Horror Kids' vibe, ParaNorman becomes much more -- a terrific, ghoulish, comic thriller that cheerfully wears its bloody heart on its sleeve.

Norman Babcock sees dead people; he is surrounded by ghostly apparitions wherever he goes in his small hometown of Blithe Hollow. Norman (voiced by Kodi Smit-McPhee, from Let Me In and The Road), however, is not afraid of the dead, mostly because they seem like a happy lot. His grandmother (Elaine Stritch) keeps him company at home, and friends in the neighborhood greet him as he walks to school.

The dead are better companions to him than the living. His parents (Jeff Garlin and Leslie Mann), his older sister Courtney (Anna Kendrick), and his fellow students at Blithe Hollow Middle School (including Christopher Mintz-Plasse) all consider him to be nothing more than a "weird" kid with imaginary friends. He is, for all intents and purposes, invisible to them, someone to be ignored, minimized, and/or ridiculed.

Until, that is, the town's ugly past comes back from the dead with a vengeance.

From there, ParaNorman expands the boundaries of its story in delightfully unexpected directions. Norman is visited by an off-putting bum named Prederghast (John Goodman), learns a secret, finds an ally in plus-sized schoolmate Neil (Tucker Albrizzi), deals with some zombies ...

Zombies? Yes, zombies, but, happily, the shambling undead are not presented as we've seen time and time again, which keeps things off-kilter.

ParaNorman is the second 3D stop-motion animated feature from LAIKA Films; their first was the rather good Coraline. Chris Butler, who was head of story and character designer on Coraline, and also worked on Tim Burton's Corpse Bride and The Tale of Despereaux, wrote the original story and screenplay for ParaNorman, and shares directing credit with Sam Fell, a veteran whose credits include Flushed Away and The Tale of Despereaux. 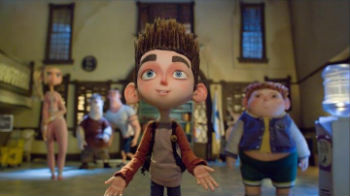 Butler's characters are well-delineated as to their personalities, in addition to their visual characteristics. Despite the torment he has suffered in his young life, 11-year-old Norman still has a big heart, swelled by generous, optimistic thinking that has kept him open to new experiences. Instead of withdrawing into his own problems, he remains sensitive to the emotional needs of others; he has great empathy, which makes him a tremendously appealing protagonist.

Rather than suffusing the intolerant townspeople with evil tendencies, the film presents them from Norman's more kindly point of view: they just don't know any better. Even the more antagonistic characters are well-motivated; that makes their actions understandable, but no less unsettling.

All the varying aspects of the story and characters -- the comic and the dramatic and the frankly frightening and the heartwarming and the ghoulishly gory and the deeply disturbing -- come together in a manner that is entirely satisfying, with a potent, full-bodied aftertaste. The tech credits are excellent; the 3D effects are handled with good taste and discretion, much like those in Coraline. The vocal work is top-notch, with additional talent such as Casey Affleck and Tempestt Bledsoe popping up without calling undue attention to themselves. Jon Brion's score, a riot of minor chords, is the cherry on top.

The happiest surprise of the summer, ParaNorman is a dark chocolate pleasure in a white milk world.

ParaNorman opens in the U.S. and Canada on Friday, August 17.