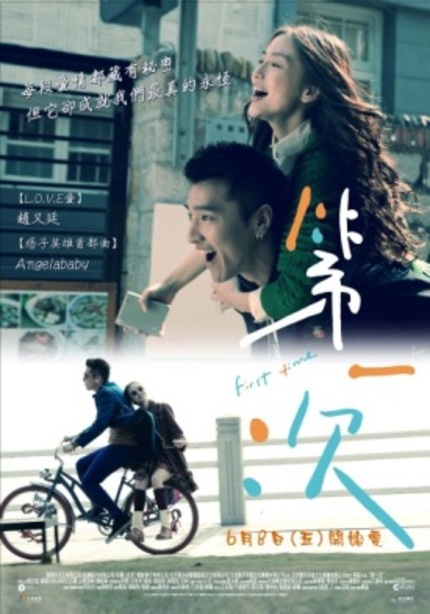 Apart from the setting, First Time could've been a Taiwanese film. It borrows a lot from recent efforts (Tom Lin's Starry Starry Night or Juliets, to name just two) and it emits a very similar vibe. Not too serious, not too sentimental, while still harboring a lot of heart and warmth. The characters and setting on the other hand help to ground it as a mainland Chinese film.

First Time starts off as a rather typical romance. Two old friends (Shi and Gong) run into each other by accident, old feelings resurface and the two start hanging out together. What sets this film apart the first 30 minutes is the fact that Shi suffers from a very rare disease. Shi cannot exert herself as it could lead to instant death, while the pills she takes to help her cope with her disease greatly affect her memory. Gong helps Shi to appreciate her life beyond the limitations of her disease, but two young people in love can find it a little hard to restrain themselves.

Around the 30-minute mark things start bordering on the cheesy and sentimental, but right at that point Yan turns the whole thing around. Revealing anything about the rest of the film would be too much of a spoiler, but it's safe to say that Yan has a couple of surprises up his sleeve that turn First Time into more than just a mushy, melodramatic romance flick. He never lets the drama dwarf the romance though, so the light-hearted and feel-good atmosphere is allowed to reign throughout the entire film.

If you know that the cinematography is handled by Charlie Lam (Isabella) you know that you can expect a looker, but Lam really outdid himself with this film. The attention to detail is stupendous. The warmth and vibrancy of the colors is absolutely stunning, the camera work equally wonderful and the overall effect is just baffling. Add to that some lovely visual effects (a lot of hand-drawn animations are blended into the live-action footage, to great effect) and you have one of the best-looking films of 2012. The images simply radiate romance and become a crucial factor in the experience of the film.

The soundtrack is not up to par, but it suffices. Gong is part of a rock/punk band so you can expect some rather mellow Chinese pop/rock music, not really my thing I'm afraid. The remainder of the soundtrack consists of nice but predictable romantic music. Cue some piano tracks and other light-hearted pieces to set the mood. Overall it's not too bad, but the soundtrack could've used something to set it apart from its peers.

Luckily the actors don't let the film down. Mark Chao is strong as the somewhat ambivalent Gong, Angelababy (she should've stuck with her real name, but alas) is perfect for the role and the chemistry between the two of them feels quite real at times. They keep a nice balance between the romance and the more dramatic scenes in between, never letting either one dominate the other. The secondary cast is pretty capable too, in particular Jiang Shan who puts in a very strong performance as Shi's mother.

If you think the first half hour is a little too sentimental to your taste, persevere for a little while longer and you'll find out that not everything is as it seems. While seen in its entirety First Time is clearly a full-blown romance film, but it also has a more dramatic edge to it than you might suspect at first. The ending may be a small downer for some, but I feel it fitted well with the rest of the film and I believe that any other ending would've turned out feeling a little forced.

First Time is a superb example of how to do romance right, without necessarily ending up in arthouse territory. Yan made a very sweet film, added the right amount of drama and made sure that the visuals alone could carry the film. While a very close neighbor to the current Taiwanese wave, First Time is a typical mainland China film that could do a lot of good to the image of Chinese cinema for a broader range of film fans.

People who are interested can pick up the Hong Kong DVD/Blu release from Edko Films.