Review: 2 DAYS IN NEW YORK Finds that the French are Crazier than Chris Rock 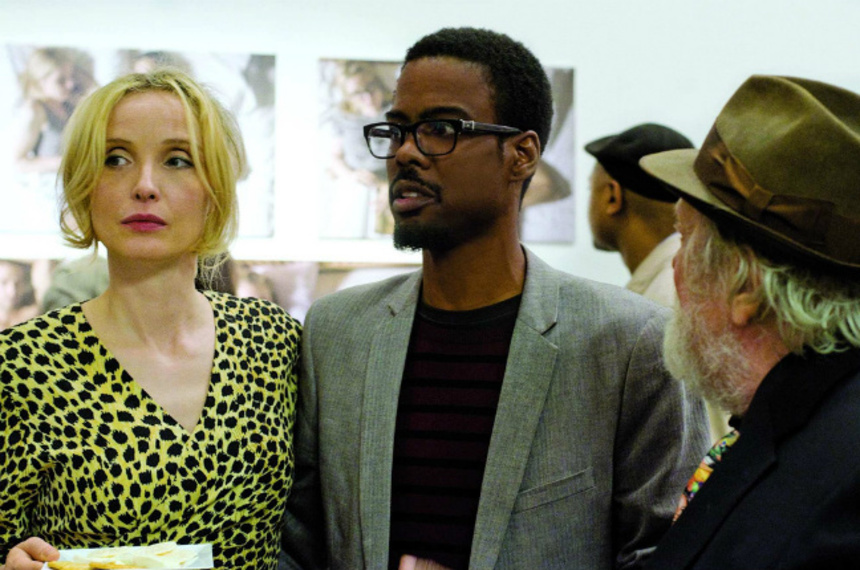 Fans of literate, neurotic comedies have had a rough summer, both because Woody Allen's To Rome with Love was such an uneven, forgettable affair, and also because almost nothing along these lines ever makes it to theaters besides Allen's yearly film. Fair or not, the scarcity of such films made me appreciate director/actor/writer Julie Delpy's 2 Days in New York far more than I might have were the cultured-adult-comedy market more saturated.

I don't mean to damn it with faint praise right out the door: It is, on any terms, an often inspired, genuinely funny cross-cultural farce that boasts excellent performances from its ensemble cast. The film does not however, break any new cinematic or comedic ground, and actually, it doesn't really aim to. Perhaps that's exactly why it's such a gem -- Delpy never panders to the lowest common denominator, but she also refuses to infuse the movie with any pretentious notions of grandeur, smarter-than-you winks or desperate emotional gravity. The result certainly isn't without precedent (hell, look at the screwball comedies from the 30's and 40's), but it's all-too-rare these days. Of course, none of this would really matter if the film weren't charming and funny. And it is -- to the point where it's easy to forgive even when it occasionally strays into broad, cliched territory or carries on a joke too long.

The story picks up several years after 2 Days in Paris. Delpy's French photographer character Marian is now living in New York with a new boyfriend Mingus (Chris Rock), and their children from past relationships. She's reasonably content and balanced, that is, until her stubborn, unassuming father, douche bag ex-boyfriend and psychiatrist/basket-case sister show up for a visit. Culture clashes and farcical mayhem ensue.

Yes, It's fairly well-worn territory, and Delpy certainly makes no apologies for exaggerating French cliches and stereotypes. In fact, her family comes off as so crazy that Chris Rock is actually playing the straight man here. But it's a lot more fun than it sounds. Delpy has honed her comic voice in the years since 2 Days in Paris, and the witty dialogue and chaos here all flows with a bouncy, free-wheeling spirit that would make Preston Sturges proud. The performances all-around are also great, especially from Rock and Albert Delpy (yep, her real father) as Marion's dad. The ensemble approach to the story serves the film well too, as Delpy never lingers on any one character long enough for them to wear out their welcome (which Adam Goldberg started to by the end of 2 Days in Paris).

Also, a quick note about the French stereotypes in the movie and my own personal bias: A number of critics have whined about Marion's family coming off as far too cliched and one dimensional. I agree that she certainly takes their quirks to an extreme (which makes sense for comedy), but, having lived in Paris for two years, I'll argue that she also hits on some truths about this particular culture clash that most American films miss -- especially the way that many French react not with disgust or anger towards cultural differences with Americans, but simply with genuine confusion that someone thinks they've found a better way to do things. I'll also add that, in the theater in Paris where I saw the film, the audience laughter at most of these jokes was uproarious.

Anyway, the film keeps its energy, wit and charm moving at full force until close to the end. Here, despite an inspired and surprising cameo -- that is if you haven't read a review that already spoiled it -- the film stumbles a bit, with a wrap-up far too convoluted and heavy-handed to suit the spry exuberance that came before. But because of that exuberance, and Delpy's refreshing unwillingness to ever take the film to mean-spirited territory, it's hard to begrudge the film too much. And like I said, for whatever reason, they don't make them like this very often anymore.

2 Days in New York opens in New York and Toronto on Friday, August 10; it will expand in limited release starting on August 17.

Do you feel this content is inappropriate or infringes upon your rights? Click here to report it, or see our DMCA policy.
Julie DelpyAlexia LandeauAlexandre NahonChris RockAlbert DelpyComedyDramaRomance