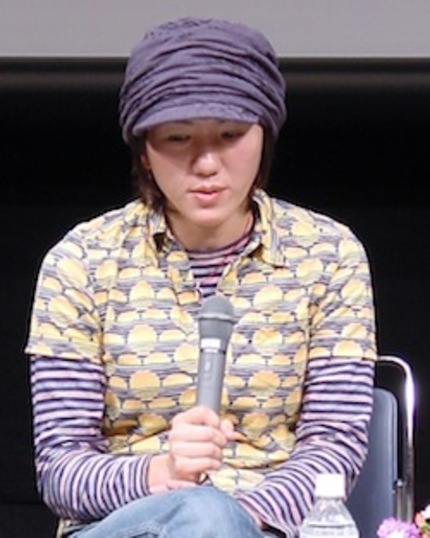 Over the last couple of years New York audiences have had a couple chances to cozy up to the films of Naoko Ogigami, with Japan Cuts screenings of the enticingly-titled Toilet and the less-so-in-title but equally charming  Kamome Diner. This year she's back with Rent-a-Cat. Our correspondent, The Lady Miz Diva sat down with Ogigami to chat about directing cats, humans, and of the international film stage. This interview is being cross-published at Diva website, The Dive Review.

The Lady Miz Diva:  How do you feel presenting "Rent-a-Cat" before Japan Cuts' New York audience?

Naoko Ogigami:  I'm very excited.  I was looking forward to it. I received a warm reception during Kamome Diner.  Hopefully, I'll hear a lot of laughter like I did last time.

LMD:  What was the inspiration behind "Rent-a-Cat"?

NO:  I'm a cat lover.  The initial idea came from one of my father's friends who is in his seventies and his beloved cat just passed away, but because he's still in pain, he can't quite get a new one yet.  So I heard about that story and that was the inspiration for the film.

LMD:  There is a very prominent cat in your previous film, "Toilet", as well.  What do cats represent to you?

NO:  I always intend to put a cat in at least one scene of all my films as sort of a good luck charm.

LMD:  I think everyone is going to wonder about your four-legged stars.  What was it like to work with all those cats?  Were they trained animal actors? Were there any demanding cats that wanted more close-ups?

NO:  I thought that if I got all the cats from various animal productions that would cause an internal fight amongst the cats, so I decided to just use one animal production and got all the cats from the same production team.  I can't really ask them to act, so I just asked to be natural.  To be as they are.  I'm a cat owner myself, so I know their nature.  I know the way they are.  So instead of forcing them to do anything, if they wanted to go a particular way, I just let them go.  I let them be the way they are.

LMD:  What was it about your human star, Mikako Ichikawa, that made you feel she was your perfect cat renter, Sayoko?

NO:  There's a very curious appeal about her as an actress.  She's thirty-four right now and she's gradually getting older and her performance is getting better and better.  I wanted to capture her sort of innocent boyishness in her that is still remaining before she's a fully-grown, mature actress.  I wanted to capture that moment.

LMD:  In the US, women who are single and live with a lot of cats are sometimes termed as "crazy cat ladies," and it's usually not a compliment, it's more like a stigma.  Does that comparison exist in Japan, as well?

LMD:  How did Ms. Ichikawa come up with that bizarre voice Sayoko used when pushing the cat cart and calling out to rent the cats?

NO:  Maybe it's because she's using the megaphone?  That tone that she's mimicking in the film is actually very particular to Japanese culture.  Often when they sell hot, sweet yams in Japan, they have them in carts or in a big truck, and usually men that sell those use the speaker and use that voice.  She's sort mimicking that tradition.

LMD:  There's an almost comic book-like quality to the tone and framing of Rent-a-Cat.  How did you decide on the film's tone and balancing the comedy against the more poignant moments?

NO:  This is not particular to this film, but for Kamome Diner, as well as Toilet, I always inject my own sense of humour into the film, but I actually make sure I depict the drama within the humour, as well.  People often ask me what genre is your film, and have no choice but to respond that it's drama plus humour.

LMD:  Since the movie is open-ended, is it possible we might see "Rent-a-Cat Pt. 2"?  You really hope that Sayoko ends up happily and gets her wish.

NO:  It's often said that my films are open-ended. Instead of me posing a conclusion, I want to keep it open-ended, so that the audience can feel and enjoy the ambiance of the end and think about what's next.

LMD:  You studied film at USC and then worked at pretty much every kind of job behind the camera in a variety of projects after that.  What has that experience given you in terms of the films you direct?

NO:  One of the good things about studying in the United States is that I was able to objectively see Japan. I've shot in different countries including Canada, Finland, and of course, Japan, and every time I've been able to viscerally, physically experience that the goal of making a film is the same; something that we all share as a crew in different spots.

LMD:  Was that feeling what made you decide to study film overseas, being able to see Japan objectively and working with international crews?

NO:  Yes, that is my goal.  And I love to drink, so I would so I envision shooting a film in some island in the west or in Africa in the great wild, out in nature, or even in the urbanscape of New York City.  I'd like to shoot everywhere and that's part of my goal, as well.

LMD:  Are you most comfortable directing a piece that you wrote?

NO:  I can't direct anything else besides my own work.  I love to write and the sole reason I direct is because I want to back my own work that I wrote.  But in terms of working on set, it's not my strong forte.  I prefer to write.

LMD:  Who are your influences?

NO:  I don't really have one, but I do respect Yayoi Kusama, the artist.

LMD:  Does art register more on your vision?

NO:  They way she lives, I respect that better.  She also has very bright, pink hair.

LMD:  While working in Japan, have you ever felt any hesitation from investors to produce your films based on the fact that you're a female?

NO:  I've never felt that it was particularly difficult.  It's not that it makes it easy because I'm a woman.  Regardless of whether you're a female or male director, financing is difficult for everybody.

LMD:  What would you like people to take away from "Rent-a Cat"?

NO:  I recently had children, so I really understand the feeling of loving and treasuring small things. I feel very sorry for people who cannot feel that way toward small creatures; people who abuse animals or children, even.  I feel that is a handicap, a psychological disease.  So, I really want to celebrate and communicate this feeling of treasuring small beings and creatures of the world.