Blu-ray Review: KAHAANI Is Further Proof That India Is On Fire In 2012! 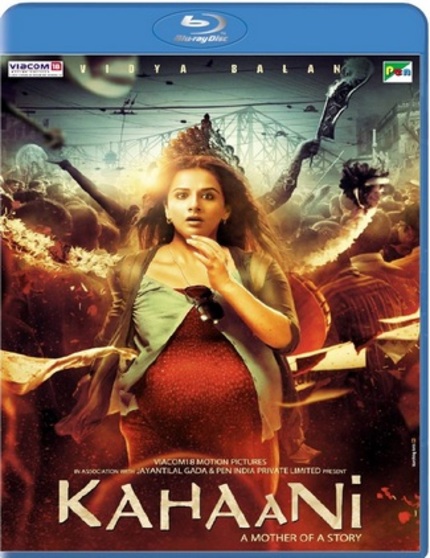 Sujoy Ghosh's Kahaani is a film that I really wanted to review when it released back in March. However, outside forces conspired to keep me out of the cinema for the duration of its run, so I've decided to review the Blu-ray since I think this film really deserves some international attention. This is no Bollywood melodrama, there are no song and dance numbers, no absurd action scenes, just a tense, quality thriller that keeps the audience on the edge of its seat until the mind-blowing conclusion that you won't have seen coming.

Vidya Bagchi (Vidya Balan) steps off a plane in Kolkata in search of her missing husband and is shut down at every turn. She is seven months pregnant and desperate. Everyone she questions tells her that they know nothing of Arnab Bagchi, and even worse, the police are beginning to think she's crazy. Within a few days she's poked enough anthills to piss off some really testy intelligence agents and people start to die. Maybe she's on the right track, maybe she's in the middle of something she hadn't expected, maybe her husband wasn't who she thought he was, or maybe there's something else going on...

Director Sujoy Ghosh managed to catch lightning in a bottle with Kahaani. While his story is exceptionally well written, and his direction very effective and taut, the true catalyst for this film's success is Vidya Balan. The actress had already shot Kahaani when her breakout role in The Dirty Picture put her name on the lips of every critic in India as the finest actress in the country. So, when Kahaani went into promotional overdrive mere weeks after The Dirty Picture's massive success, Ghosh's film had a huge wave to ride to success. Thankfully, all of the praise heaped on Balan for The Dirty Picture was well deserved, and she managed to make a hit out of her second consecutive solo leading role in a film, which was, until now, completely unheard of for a female performer in a mainstream Hindi film.

Vidya Balan is onscreen for the vast majority of the film, and she owns the film, but she is also surrounded by an incredible supporting cast who manage to make their indelible film. Even though Balan will be the most praised for her performance, it is her supporting players that make Kahaani special. Man of the hour, Nawazuddin Siddiqui, plays a very terse intelligence agent determined to derail Vidya Bagchi's renegade investigation at any cost. The one police officer who puts himself on the line to help Vidya is played by Bengali actor Parambrata Chatterjee, who plays his role with a kindness and earnestness not often found in these kinds of films. As good as these actors are in their roles, there was one name that kept tongues wagging for weeks after Kahaani released, and that was Bob Biswas, the milquetoast assassin with the wicked combover played by Saswata Chatterjee. Biswas is incredible, and this Chatterjee's performance is amazing, the way that he manages to create a complete character with the limited amount of screen time he's given is amazing.

There have been many conversations about the film online, and the one thing that detractors seem to mention more than anything else is the presence of plot holes at the end of the film. I'm of the opinion that the plot hole argument is used by lazy critics who can't really explain why they don't like a film, or why they weren't engaged. If there are plot holes and you notice them, it's because the action or the story didn't grab you, because if it did, those things wouldn't matter. Kahaani has a whiplash ending (which I'll not spoil for you here), it will have you shaking your head in disbelief, but it works incredibly well in my opinion, and I adored it. I really didn't see it coming, and that made me smile.

Every year when I fill out my top ten lists I attempt to allocate at least one spot to an Indian film, just for the sake of exposure. This year, it's going to be everyone else that will be fighting for a space against the Indians. Kahaani is the third Indian film I've marked on my ever-changing list for the end of the year, along with Agneepath and Eega, and that doesn't even count the independents! This is a wonderful year for India, and Kahaani is a film that deserves YOUR attention. It doesn't have any of the Bollywood conventions that people typically use as excuses for not watching Indian film, so now it's up to you to give it a shot. Needless to say, Kahaani is highly recommended.

Kahaani comes to Blu-ray from Reliance Home Video, and it is a great looking disc. Reliance is one of the better companies releasing Indian films on Blu-ray. There are other companies who are less consistent, but if you see the Reliance name, you're pretty safe. The image is gorgeous, Sujoy Ghosh's film is bathed in lights and colors to reflect the pulsating life of the city of Kolkata, including their massive celebration for Durga Puja, which plays a major part in the film. The image is crisp and sharp, and there is little evidence of undue digital shenanigans. The audio is also exceptional, this won't be a floor shaker, and there aren't any big song numbers to test the low end, but the background score is still very clear and the dialogue is very easy to decipher. Fantastic work on the A/V here.

Reliance have also included several bonus features, which is unusual for Indian Blu-ray discs. Typically DVD releases will have bonus material, but 90% of the time it is jettisoned for Blu-ray, not here. Kahaani features a very informative commentary, in English, from director Sujoy Ghosh, whose passion shines through in the track. This was a very personal project that he'd been trying to get made for a while, and he has no problem sharing his feelings about the production. There are also several deleted scenes, none of these have subtitles, but they all have director commentaries in English, and there are interviews with some of the cast, unfortunately those are not English friendly either. Rounding out the extras are a set of what look like making of webisodes, each about five minutes and English friendly. They only total about fifteen minutes, but they show a very different side of the production, which is nice.

Kahaani is definitely worth checking out. The purchase link below is a third party seller, but you can find the disc at NJMTV.com, if you want to buy directly.

Order Kahaani on Blu-ray at Amazon