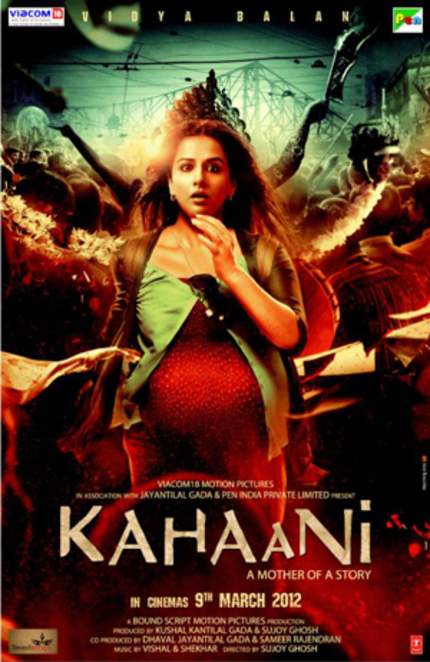 I have been informed by the powers that be at Mela, that this release has been postponed to April 20th. Apparently there are some QC issues to iron out. While it is a bit disappointing, I'm okay with waiting if it means a better product. In the meantime, they'll be premiering the recent rom-com, Jodibreakers on April 13th in its place.

Sujoy Ghosh's Kahaani, starring Vidya Balan, is the best reviewed Bollywood film of 2012. For reasons beyond my control I've been unable to see and review it for ScreenAnarchy as of yet, however, Mela is coming to my rescue and making the film available via their streaming services on April 13th. This is only one month after the film's theatrical debut and before home video releases.

I continue to be impressed with Mela's services and the quick turnaround on big name films as well as their commitment to independent features via their deal with PVR Directors Rare. I promise, as soon as Kahaani goes up on Mela, I will watch and review it for the site, I've been itching to do so since opening night!

Here's what Mela have to say about this great acquisition:

Mela is thrilled to announce that we have acquired non-exclusive online rights to the hugely successful and highly popular recent Bollywood hit, *Kahaani! *The film's release on Mela comes just one month after its theatrical premiere in India. We will provide distribution of the film on the Mela Movies iPad App and Roku channel starting April 20, 2012.

The Sujoy Ghosh-directed film* *stars Vidya Balan as a 7-month pregnant woman who travels to Kolkata in search of her missing husband, only to find that everyone she asks for information about him claims that no such person exists. The movie was received with instant public and critical acclaim upon its theatrical release on March 9, 2012, collecting praise for its cinematography, originality, screenplay, and performances.

*Kahaani *arrives on the heels of last year's *The Dirty Picture, *also starring Balan and earning her a Best Actress Filmfare Award.* *Along with her universally appreciated performance in 2010's *Ishqiya*, *Kahaani* is yet another addition to Balan's rapidly growing resume of powerhouse roles. All three films are available on Mela.