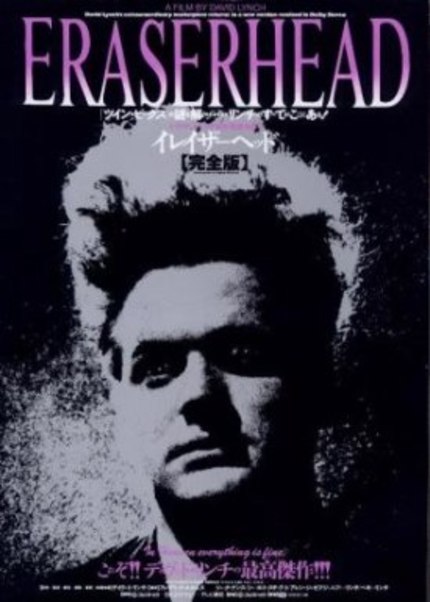 If there is one film that ultimately led to the existence of ScreenAnarchy, it's probably Eraserhead. The one film that kick-started a whole league of weird and vague little films garnering underground followings, the mother of all cult films. ScreenAnarchy is still lacking a review of Lynch's early masterpiece though, an injustice that will now be rectified ...

The 80s had Tsukamoto's Tetsuo, the 90s brought us Aronofsky's Pi and you could say the past decade gave us Ishii's Electric Dragon 80000V. This obscure series actually found its origin during the 70s, when David Lynch released Eraserhead upon the world. A cult film with a capital C and a film that changed many people's vision on film. Years later Eraserhead still stands proud amongst its contemporary competitors, though 35 years of cinematic progress did leave a small mark.

Together with Tetsuo, Eraserhead was a film that helped to shape my love for movies. Before I watched these two films I was easily satisfied with a challenging storyline, a couple of twists near the end and some famous actors to draw me in. I watched one or two films a week and that was fine. Everything changed when these two films landed in my lap (horrible VHS copies, but that was all we had back then). Suddenly film was something that could provoke unseen worlds and feelings, detached from simple plot devices and actors. Film became something that could be about experience, not just about understanding.

Eraserhead is Lynch's directorial full-length feature debut. He made several shorts before this film, his particular style already blossoming (The Grandma in particular is very Eraserhead-like), but Eraserhead brought everything together in 85 minutes of alienating madness. While there are vague traces of some kind of plot, it makes very little sense and it's almost useless to try and keep track of it. Instead you're better off immersing yourself in the experience that Lynch provides.

Henry Spencer is a young man living alone in a nameless, decaying city. Suddenly he is contacted by Mary (his ex-girlfriend) who invites him to dinner. Spencer accepts the invite, but gets cornered by the girl's parents, who adopt Henry as the father of her recently-born child. Not just any baby mind, but a horrendous little monster without arms and legs, completely helpless and reliant on the care of others. When Mary breaks down she packs her bags and leaves the baby in Henry's care, who is quite unfit to take care of the child by himself.

Eraserhead is shot in gritty, high-contrast black and white. The decaying urban setting is rich in darkness, with only a couple of lights providing a very nightmarish atmosphere. One thing that still baffles me are the film's visual effects. For a 70s film the baby looks a little too life-like at times, which definitely helps to uphold a very creepy vibe. Camera work and editing on the other hand are strangely lacking. It's something I noticed even in more recent Lynch film, where the timing just seems a little off. It gives the film a sloppy finish which is a shame considering all the work that went into the visual styling.

The soundtrack on the other hand is top notch. Superb industrial-like noises, sharply stitched together to create a very uncomfortable and dark experience. It's not so much a collection of tracks as it is a collection of sounds, but as true noize-adepts will know this is hardly a negative thing. It gives the film a very dark and surreal atmosphere that lingers even when the film is over.

The acting is pretty basic, it's more about presence and image than actual acting talent. Jack Nance is an awesome Henry Spencer though, whose film cover image has become iconic over the years, if only because of his crazy hairdo. The rest of the actors all have minor roles that contribute very little, the best actor here is probably the baby, who isn't even human. Then again, the distant and detached acting style probably only contributes to the overall atmosphere, so this is hardly a critique.

Eraserhead remains a wonderfully alienating experience, just don't expect things to make sense. Even though there's actually a whole sequence explaining the title of the film, it bears no relation to the other scenes, nor does it contribute much to those trying to understand what Eraserhead is all about. In the end the film plays a lot like a nightmare and I believe it's best experienced that way. It's a dark, brooding and weird film that still manages to out-gross some modern horror flicks, even when it feels weird describing Eraserhead as a straight-up horror film. Instead it feels more like a fore-runner of the industrial/(cyber)punk movement that helped to feed the underground film scene these past 30+ years.

It's hard to ignore the toll that time has taken on this film. While static shots still look awesome and the special effects are more than sufficient, the sloppy editing takes a little away from the experience. It's only a small defect though and while it does impact the film there is still plenty to enjoy here. Eraserhead is definitely a film worth seeing, if only to experience a kind of film that doesn't rely on plot to deliver its message.

I watched the original UK DVD release, though people interested should definitely check out the new Umbrella Entertainment Blu-Ray edition, supervised by Lynch himself.

Do you feel this content is inappropriate or infringes upon your rights? Click here to report it, or see our DMCA policy.
David LynchJack NanceCharlotte StewartAllen JosephJeanne BatesFantasyHorrorSci-Fi