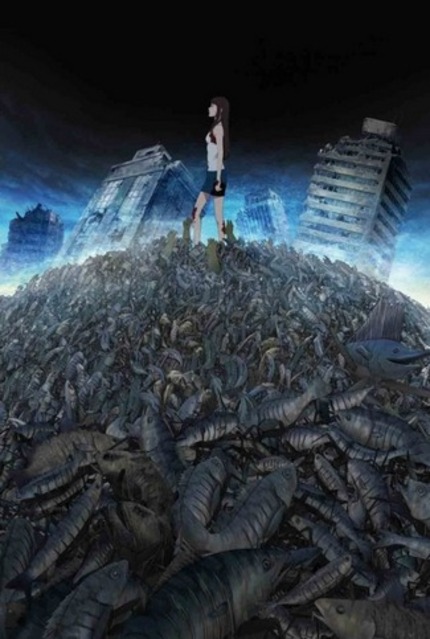 While I cannot honestly say that I am familiar with the manga of the same title, I can say with some authority that Gyo, the anime feature, is likely to be one of the most bizarre films of 2012. As if the central conceit, walking fish taking over Japan and bringing stench and disease with them, weren't crazy enough, the filmmakers did a pretty damned good job of making this feature into something different and worth your time. A little bit Friday the 13th, a little bit The Thing, a little bit Day of the Dead, and a little bit Akira; Gyo is one of a most fun, most disgusting genre mash ups I've seen in a while.

Kaori has made her way to Okinawa with some friends for a senior trip while her fiance, Tadashi, toils away back in Tokyo on a studio recording gig. When their island and their summer house is besieged by fish of various sizes walking on what appear to be mechanical legs, things go from bad to what-the-fuck-was-that in record time. Kaori manages to catch a flight back to Tokyo to escape the invasion and huddle down with her beau, but it seems that the infestation is everywhere, and it's not just fish anymore. With the help of a photo journalist, Shirakawa, Kaori is determined to get back to Tadashi and live happily ever after, though the odds of that looks slimmer with every Great White Shark that goes barreling down the roadway...

Director Hirao Takayuki has done some marvelous work with Gyo, and not just visually, though the style is certainly very interesting. He has taken an established manga, and a popular one based on the crowd in the cinema tonight, and made a compelling story out of what is essentially a really goofy concept. One of the way in which this is accomplished is with continually evolving structure that leaves the viewer frequently scrambling to figure out what's going to happen next. The film begins like a slasher, evolves into a siege movie, takes a sharp left and becomes a mad scientist movie, before taking a number of other detours on it's way toward a post-apocalyptic third act that never lets up.

One of the main characters in Gyo, both the manga and this anime, is the so-called Death Stench, a pervasive odor of decaying human flesh that brings even the heartiest of souls to his knees. The visual representation of the Death Stench is putrid enough that it almost wafts off the screen into the audience. Anytime a character bit the dust, or the Stench appeared on screen there were audible grunts and moans in the cinema, it was like Odorama, but without the scratch and sniff. It isn't just the Stench, it is the way in which the Stench moves around on screen, and the way it is produced from infected bodies that gave me the willies, but I'd rather let you experience that for yourself than spoil it any further.

The most interesting visual choice, however, was the use of 3D CG elements almost exclusively in animating the fish creatures.  Nearly all of the environments and all of the main characters are standard looking 2D animated figures, but the fish creatures are all 3D CG animation, which lends an even more bizarre quality to their presence on screen. As if it weren't weird enough to have hordes of fish with creepy mechanical spider legs crawling all over Tokyo, they also just look wrong, almost disconcerting, even in the bizarre context of the film. I've gotta say, it works. It threw me when they first appeared, but by the time the film really hit its stride, it was just a part of the look, and I kinda dig it.

Make no mistake, Gyo is a seventy-minute, nonstop gross-out, and the crowd ate it up. Every time you thought they'd crossed the line, they'd cross another one, and leave the audience reeling with appreciative/nervous laughter. With a manga this popular, I'm sure that Gyo will find a place on home video soon enough, even with the havoc that pirating has already played on it's commercial prospects. Fans of the bizarre, clever, and just plain crazy have a lot to look forward to in Gyo.
Tweet Post Submit