Review: PROMETHEUS IMAX 3D Brings Fire Down From The Heavens 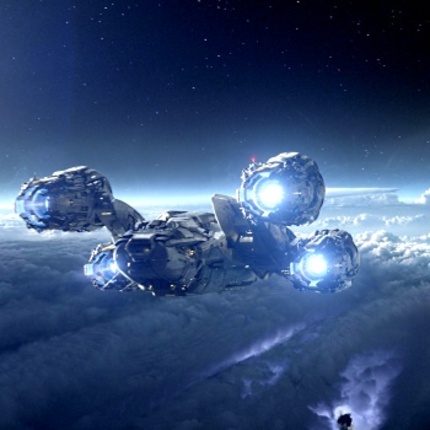 UPDATE: Beware of spoilers in the comments below the review!!!

I don't know what Brian was smoking before he saw this, but it might very well be my brand (this is a link)...

Thanks to the wonder of the Internet there sure is no shortage of opinions on Ridley Scott's new science fiction film "Prometheus", and the consensus seems to be that while the film has some very impressive eyecandy in it it's a staggering disappointment with regard to the script.

Or is it? Flip-floppers and dissenters are vocal as well and the arguments already are getting quite heated. If nothing else, at least "Prometheus" sure gets tongues wagging about itself.

My personal opinion as written down here will not do anything to change the current debate, also because the shouting match I want to start will have to include spoilers and minute details. It's early and many people want to see "Prometheus" with at least SOME surprises left in it so I'll have to keep the film somewhat vague. Less so my opinion though: I love the film and while it is not flawless, the good far outweighs the bad. Read on! I'll be as spoiler-free as possible...

At the end of this century, scientists discover evidence that the human race may have been created by an extraterrestrial species and even manage to pinpoint a location in deep space where these creators probably still exist.
Soon after, the spaceship Prometheus goes on an expedition to see if contact can be established.

But the crew of the Prometheus only encounter huge old, abandoned buildings. Well... seemingly abandoned. And while the visit does answer some of the expedition's questions, what they find is not especially welcoming towards visitors whether they be offspring or not...

Expectations can be a bitch sometimes and, to quote the marketing campaign for "Alien 3", THE BITCH IS BACK!
Probably not since George Lucas made "The Phantom Menace", a prequel for HIS franchise, have expectations been so stressed. After all "Prometheus" is the film which reunites Ridley Scott (like Lucas before him) with the title which made him a worldwide superstar. And like Lucas it reunites Scott with the science fiction genre for which he created his most seminal movies, the masterpieces which were endlessly copied, followed, and cherished. 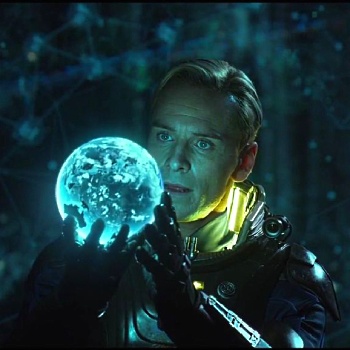 "Alien" and "Blade Runner" have been influential to the point where they went beyond the meaning of that word. These films literally changed the genre of science fiction films but they also did more, spreading their effect into books, video games, art and general design. People wondering why so many people still consider Ridley Scott to be relevant as a director, well... there is your reason. Whatever you may think about his cinematic output of the last 30 years (and I am nowhere near as negative about that as many), his two SF-films have changed the universe of popular fiction forever.

So big question number one: will "Prometheus" have a similar impact as "Blade Runner" and "Alien"? Well... the whole masterpiece label sort of happened to those two movies, struggling upwards from an underdog position. In contrast "Prometheus" starts at the top, with an audience expecting, no DEMANDING a masterpiece. It's from the same guy right? Only this time he had nearly unlimited resources so it's GOT to be better.

I went into my screening with seriously diminished expectations, based on all the hoopla on the Internet of the past few days. I fully expected to be disappointed to the core of my being, like I had been with "Alien 3" and (to a lesser extent) with "Alien Resurrection". It didn't happen. "Prometheus" is too masterfully made and delivered so much of what it promised that I wasn't disappointed at all. Oh, I get much of the criticism. The focus is indeed not so much on resolving the storyline or fleshening out its characters. But do not believe the horror stories either, or at least don't believe them too much.

"Alien" got scathing reviews back in 1979, serious reviewers complained that its cast was a bunch of one-dimensional cutouts who filled their stereotype and nothing more. With amusement I've read the exact same thing over and over again for "Prometheus". Time will tell I guess. None of these characters can compete yet with the ones we've known for the past 30 years or so. Well, with the exception of Noomi Rapace's Ellie and Michael Fassbender's David because they knock their roles straight out of the park. And worth noting: Ellie is not a Ripley (or a "Ripley Light") but her own character and I really liked her in the film. 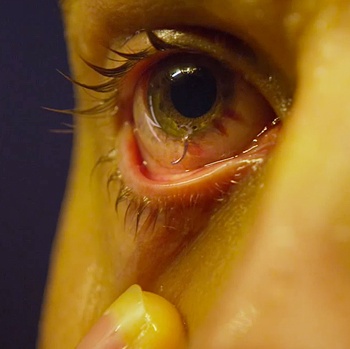 When we get to the visual aspect there is no contesting that "Prometheus" rules this summer. Like George Lucas, Ridley Scott opened his new digital toolbox with relish, to endlessly tinker with it. Unlike George Lucas, Ridley Scott has done something pretty damn awesome with it. Seeing this in 3D IMAX has delivered me some of my finest moments in cinema this year, and people fearing that the 3D would be used to have facehuggers jump at the camera, no, that's not what happens. Instead the technology is used to point at nuggets of beauty in the alien chaos. It embraces the splendid art direction and lifts the visuals to a great height. I want to see it again. Right now.

So is this the film of the year? My epiphany in the cinema? No, because "Prometheus" is not exactly flawless. There are some crazy stupid moments in the film. You, know, like someone showing you the best compass ever made and then not using it, getting inexplicably lost. That sort of thing. But normally stuff like that would sink the film for me and in this case it didn't. I was too enthralled by the whole experience I guess, but clunkers like that can never be entirely ignored either. Maybe there will be a twenty minute longer cut later on, explaining away goofs like that? I can only hope.

Many people will be no doubt disappointed that many big questions are juggled here, yet precious few get any sort of big answer. If the rumors about a sequel are true, rest assured there is PLENTY LEFT TO DISCUSS in it. I was disappointed too, but not much. Storywise I was actually a little impressed because the second half played out so different from what I expected. I've read an online story version based on all the trailer material out there, and it was quite wrong on many counts. Oh, you will guess one or two big moments from the finale right but not what happens before or after it, sequences which are far more important to the story. I'd say the best few scenes have not been spoiled yet, and one of them is recordbreakingly gruesome and harrowing to watch. 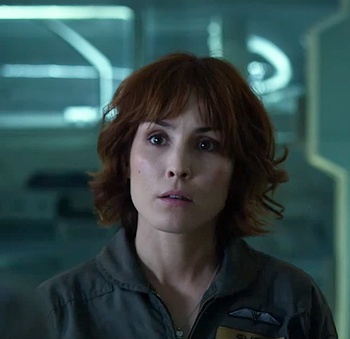 Count that to be my biggest surprise: "Prometheus" is unrelentingly icky. You know early on that things are more screwed than the characters realize, but it escalates in some surprising and disgusting ways. Some of Giger's most insane artwork gets better nods here than in any of the earlier films, even "Alien" itself! Particularly for such an expensive film such dedication to making the audience hurt and gag is impressive.

So go check this out for yourself. Masterpiece or not, "Prometheus" is surely masterfully made in most of its aspects. I cannot predict if you'll fall into the yaysayers or the naysayers, but treat yourself to the chance of finding out.

Preferably in a 3D IMAX, because DAMN...

Swinging between science fiction, (body) horror and existential drama, many people will be alienated (haha) by all the wondering what the focus of "Prometheus" exactly is. For those just wanting to see pretty pictures, this film will deliver so much more. Definitely flawed, "Prometheus" still gave me some of the biggest kicks in a cinema in years. And I love the film for it. Masterpiece or not, my guess is this sure will be a classic. 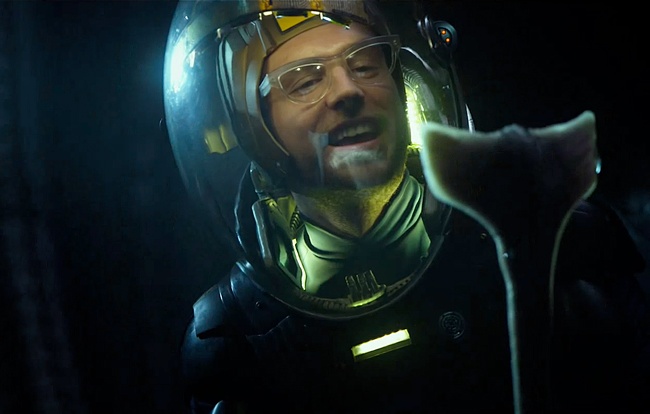