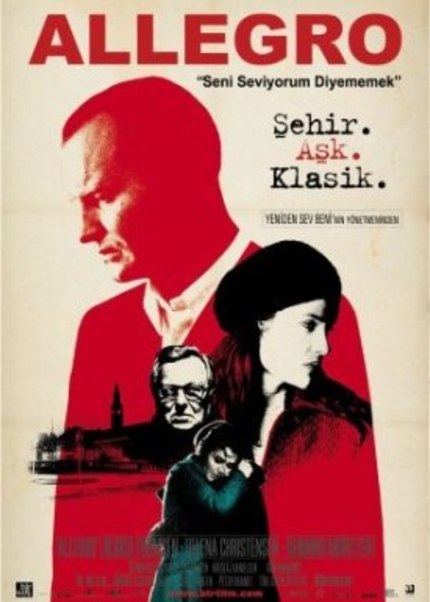 When Christoffer Boe made Allegro, he was faced with the almost impossible task to follow up Reconstruction with a film that would meet, preferably even exceed people's expectations. Allegro doesn't quite cut it, but man does it come close. It's a different film altogether and it's difficult to compare it directly to Reconstruction, but Boe's signature is clearly present, making it into another cinematic spectacle.

For whatever reason, Allegro (much like the rest of Boe's oeuvre) never made the same splash as Reconstruction did. By now you have to look far and hard to even catch a glimpse of a possible English-friendly DVD release, which is a real shame because Boe is one of Europe's biggest talents. That said, Allegro is quite hard on its audience, all too ready to alienate them from what is a beautiful and emotional film.

Allegro is a very harsh mix of traditional arthouse cinema injected with an overdose of modern film making. The setting is as classic as they come though. The main protagonist is Zetterstrøm, a talented piano player, moving around inside a realm of very decent and high-class people. But that's just how it all starts off. After a disastrous romance Zetterstrøm literally locks up his memories and emotions in a box. The box explodes, blows up into its own micro universe and takes over a part of Kopenhagen.

Scientists are at odds with the phenomenon, unable to find a proper explanation for what has happened. They label the place "The Zone" (there's your Stalker link) and leave it as is, since nothing bad seems to be happening (apart from the fact that a small part of Kopenhagen has now completely been shut off from the rest of the world). In the meantime, Zetterstrøm goes on living his life, continuously improving himself as a piano player. That is, until he gets an invitation to return to Kopenhagen and to visit The Zone. Not your typical arthouse story, now is it?

Visually Allegro is nothing less than stunning. Boe finds the perfect balance between nervous, edgy camera work and lavishly stylized visuals. Boe's zooms, pans, jerky shots and noisy image quality may sound like a recipe for ugly realism, but Allegro is filled with superb images that linger throughout the film (a style that Von Trier managed to copy really well in Antichrist). As for the CG, it is surprisingly effective. There isn't all that much, but it's more than just some functional bit processing, even adding to the overall stylistic impression of the film.

The soundtrack is probably the most traditional part of Allegro. It is a selection of piano tunes, very much in line with the subject of course, but not very daring. That said, it's a quality selection of musical pieces and Boe dares to stray from the beaten path, at times incorporating darker, more ambient-like pieces into his film. It's not as exciting as I'd hoped it would be, but Boe clearly knows how to incorporate music into his films.

The acting is overall strong too. Ulrich Thomsen takes up the role of Zetterstrøm and does so with great conviction. He brings a lot of pain and depth to his character, without making him too sad or whiny. Christensen is solid as Zetterstrøm's romantic interest (though no contest for Reconstruction's Bonnevie), Moritzen and Nicolas Bro (a Boe regular) both have strong secondary roles.

At its core, Allegro is a deceptively simple story about loss and romance, wrapped in a strange, allegoric sci-fi/fantasy setup. The result is refreshing and works well on both accounts. The drama is strong and convincing while the fantasy aspect is novel and exciting. It's a great combination of elements, but it could deter more traditionally inclined film fans who could find it difficult to accept both worlds in one single film.

I think Reconstruction still comes out as the winner when comparing both films to each other, but the difference in quality is ever so slight and the way Boe confirms his status with Allegro is simply amazing. The result is a strong, unique and captivating film that draws a few parallels to older classics, but stands well on its own. A true delight, sadly looked over by most people. It's a shame that people lost track of Boe because the man is one of the most visionary directors of modern cinema and deserves to be recognized.