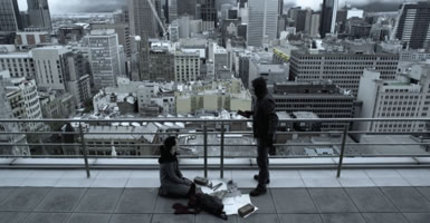 Cities can be enigmatic mazes. So many people, buildings, corridors, windows, and especially doors. Doors we will never go through, either because we haven't time, or interest, or permission. Probably like many city dwellers, I often will glance at a door and wonder what is behind it. What are the lives lived inside that space. What if the door doesn't lead to what I expect; maybe it's a gateway to something else. What if I walk through that door and I disappear into something beautiful, or terrible. Marek Polgar's quiet and atmospheric film Exit examines these questions and the people trying to answer them.

Alice is one of a small group of people living in a modern city who believe that somewhere there is a door, an exit to ... well, another place. Perhaps heaven, or another dimension, or universe. Wherever it is, it is an obsession. She and her friend Simon spend their days searching, building by building, trying each and every door systematically. Simon's girlfriend Grace has building a scale model that covers almost her entire apartment, cardboard cutouts that become more real to her than the actual city. John is a wealthy man who makes a point of locking down any building that has been searched. Alice is convinced that the door they want lies in one of the those buildings, and must find a way to convince John to unlock it.

The camera acts are a kind of documentarian, with the characters frequently breaking the fourth wall. But not in interview style; the spartan dialogue and lack of exposition mean that the camera is instead almost the conscience, or the part of the characters that would question their desires and motivations, asking for some sort of explanation. This is to the film's advantage: Polgar understands that exposition is a waste, and seeks to recreate not just the actions, but the train of thought of the characters. He achieves this through moments of slow unfolding, tracking the movements that match tracking of thought. The characters speak in their own language, their own code, and the camera finds a code to match. A strange pulse hums almost constantly under the film, a kind of reverberation that could be the electrical hum of the urban space, or the noise that the characters are trying to escape, or the heart of something they are desperately trying to reach.

While I wouldn't call the film slow, as I certainly was engaged (and hardly felt the 90 minute running time,) it is certainly minimalist. Its grey tones and hard lines show the harsh world Alice and the others find themselves inhabiting, a world they are convinced can be escaped. Polgar moves his camera along these lines, the windows and doors of the city, slowly and deliberately, asking the spectator to look at them and wonder, what is behind them. At points, the camera slow tracks through the city, then slow tracks through Grace' recreation. How different is the real city from the one we create in our minds? Do we walk around in our own hazy fantasy of what we think our city is, and do we mark some doors with an 'x', already searched and found wanting?

The world of the film feels very unnatural, and you almost wish you could go inside and help them find their salvation. This is a quiet, deliberately somewhat uncomfortable, and engaging film, meant for rainy afternoons when you can leave the theatre and walk the streets and wonder. Heavy, most definitely, but not unbearably so. It's the kind of film that will make you start to look for your own camera, following you as you walk through the streets, randomly trying doorknobs.