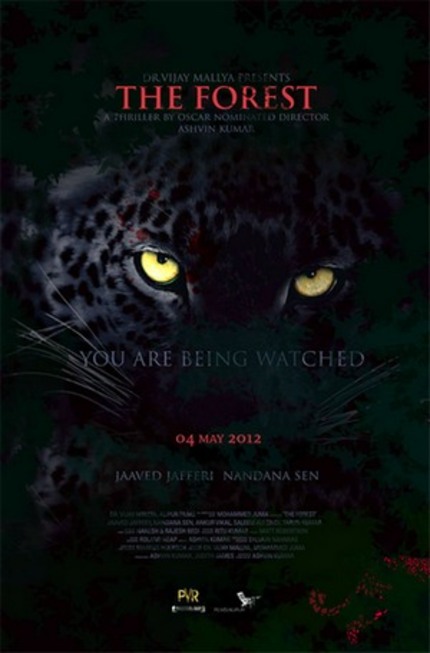 The list of lauded short film directors who've fallen into obscurity after attempting the jump to features and failing to connect is a long and sad one. Ashvin Kumar, who was nominated for an Academy Award for his short Little Terrorist in 2005, will hopefully not meet that same fate. Kumar's long moth-balled debut feature, The Forest, is a tense thriller that not only delivers thrills, but also explores the psychology of its subjects in an entertaining and thankfully non-pedantic way. If The Forest is any indication of what the future holds for Ashvin Kumar, you can sign me up for his fan club right here and now.

The story begins with a familiar enough trope, a couple going through some marital issues decides to go on a getaway in the titular forest in an attempt to rekindle the fire between them. In a somewhat contrived but effective twist, they are met by and old flame of the wife, Radha (Nandana Sen), who happens to be an inhabitant of the forest and one of it's caretakers. The husband, Pritam (Ankur Vikal), isn't particularly fond of the arrangement, but is too wrapped up in his own machismo to think much of the conflict. Meanwhile, Arjun (Javed Jaffery), the intense ex is on the prowl, and will do whatever it takes to reclaim what he believes is rightfully his.

In the midst of the exposition, we are also informed that there is a man-eating leopard on the loose in the forest, which is convenient for the story, but not so convenient for the trio of competing lovers. When one of the local stewards of the forest is attacked and nearly killed, Arjun retrieves his barely living body and brings it back to the cabin in which they are all staying. The leopard has the scent of blood and is tracking his kill, but will the animal violence and jealousy inside the cabin claim its victims first?

Kumar's script is remarkably tight, and in keeping with I'm sure in a miniscule budget, the laserlike focus of the film turns what could be a silly premise into a genuinely gripping thriller. The Forest only features five named characters, and no scene ever includes more than four of them, this incredible management of limited resources leads Kumar to turn these characters, who could easily slip into stereotypes, to breathe a bit and evolve over the space of its brief eighty-five minute run time. When the ex-lovers are left alone together, and it ends predictably, the film could have devolved into melodramatic mush, but the introduction of the leopard into this lover's quarrel creates surprising alliances and enemies, though not in the way you might imagine.

The comparison between the animal nature of the leopard, who has been forced into hunting man through no fault of its own, and the animal nature of the troubled married couple and the sexual interloper is pretty obvious, but effective. Just when you think that the leopard is the thing which is the most deserving of our fear, the reptile brain induces jealous rage in Pritam, which leads us to wonder who the true mindless beast is in this story. No one is innocent in The Forest, and Kumar's ability to create real tension and weave as complex an emotional story as he does in such a short film is really very impressive.

I sincerely hope that this late release for The Forest, which was completed in 2009 but just saw release in India and on VOD around the world via Mela this weekend, sparks some interest in this filmmaker who obviously has some serious skill. The trailers for The Forest do not do it justice, especially for non-Hindi speakers like myself, but trust me when I tell you that this film is worth your time. I wish India made more thrillers like this, and hopefully someone will give Ashvin Kumar a chance to make that wish come true.

Watch The Forest on Mela

More about The Forest