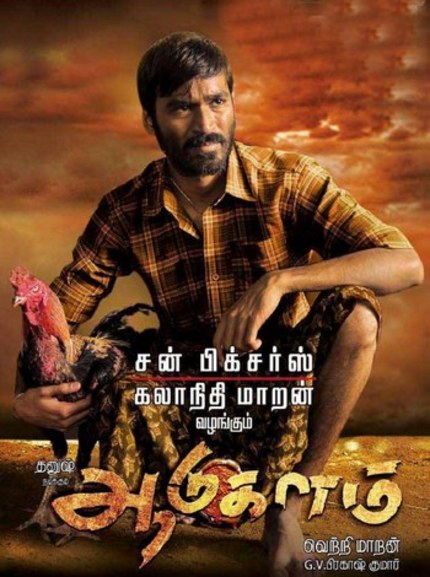 Criminal thinking is really the same everywhere, isn't it? Warring clans are warring clans. In some countries they wear suits, in others, they wear lungi (ankle length skirts for men which can be wrapped around the waist when needed). We like to think that here is the west we are more civilized than the rural citizens of a country like India. Certainly, there is no denying that the gap between rural America and rural Tamil Nadu is still wide, wider than most people think. However, the old ways are just are relevant here as they are here. We fight for pride, in southeast Asia, it's known as saving face, in any language, it leads to some of the most awful crimes in the name of what we mistakenly call honor.

Aadukalam is, ostensibly, a film about cock fighting. Black (Dhanush), is a jockey for the local cock-fighting guru, Pettaikaran (V.I.S. Jayabalan), and a proud one at that. When the local rival cock-fighting clan, led by Ranthaswamy (Nareyn), steals Pettaikaran's prized cock during the frenzy of a police raid, the race is one to retrieve the prize and prevent it from mating with Ranthswamy's hens. This sort of tit for tat petty thievery and one-upsmanship goes on for a while, until Black makes a series of decisions that put him at odds with his guru, and then the shit hits the fan.

For months now, whenever I mention Indian films that I've enjoyed or been looking forward to, someone inevitably has responded, "yeah, that's good, but have you seen Aadukalam?" For months now, it's been on my to-watch list, but it wasn't until the NYIFF delivered a screener to my door that I've have the excuse to actually sit down with the film and see what all the fuss is about. It has finally crossed by path and I can now say, with authority, that Aadukalam is the real deal.

Part of the charm of many Indian films, particularly those set in rural parts of the country, is the perceived exoticism. I'll cop to it myself, as much as I enjoy any part of these films, I do love many of them because they expose a part of the world that is so foreign to me as to not quite even seem real at times. We don't see a whole lot of this in Hindi films, but the landscape, even in many big budget Tamil and Telugu films, is significantly less modern looking to western eyes. The divide is so large that most films in those industries are deliberately designed to cater to either the "class" (urban) audiences, or the "mass" (rural) audiences. It's a very strange dichotomy that exists nowhere in quite as sharp a contrast as South India.

The resulting films very often rely on tropes of the genre they select. Aadukalam manages to bridge the gap by selecting a topic, cock fighting, that is deeply ingrained in the way of life of rural Tamil Nadu, but ingraining the story with universal truth and meaning. The battle against the corruption of the soul is a nasty one, and one most frequently fought from the inside out.

When Black goes against his Guru's wishes and fights with a cock that was supposed to have been killed, he's already in deep shit. However, when his guru disowns Black and Black ends up winning the fights anyway, it is a painful insult to the guru not only because of the disloyalty, but also because it hints at a failure in judgement. These wins make Black a wealthy man, but put him at odds with the man to whom he's dedicated his life, and he'd trade nearly everything he owns to get back in the guru's good graces. It's a battle of wills, as Pettaikaran shuns Black and Black, in turn, goes out of his way to buy his way back into the fold.

Vetrimaran's film is a remarkable piece of work. It brings this world, which as I said is so completely foreign to most, into sharp focus, and we are able to relate and sympathize with characters committing what we may see as uncivilized acts. I'm no big fan of cock-fighting, but you bet I was tensely watching the matches (unfortunately marred by some substandard CG) to see the outcome. I understood Pettaikaran's concerns about remaining the guru, it was all he knew, and he had no other currency than his word. I also understood Black's desire to please this man, a father figure for a man with no father, and why he does what he does.

The acting in Aadukalam is quite impressive, especially from Dhanush, who won the National Award in 2011 for his performance. The film is as technically slick as a film can get, but yet it remains rough feeling and immediate, as the animals fight for their lives, both in reality and in CG, and I'm not just talking about the cocks. We really aren't so different from these people in Madurai, the setting may look a bit dustier, but people are people wherever you go, and pride can be a bitch.

Aadukalam plays the New York Indian Film Festival on Friday, May 25th. Tickets and information are available at the link below.

Do you feel this content is inappropriate or infringes upon your rights? Click here to report it, or see our DMCA policy.
VetrimaaranMeghana KarthikDhanushTapsee PannuJayabalanKishore Kumar G.ActionDramaRomance

Find out more about Aadukalam and NYIFF at their website