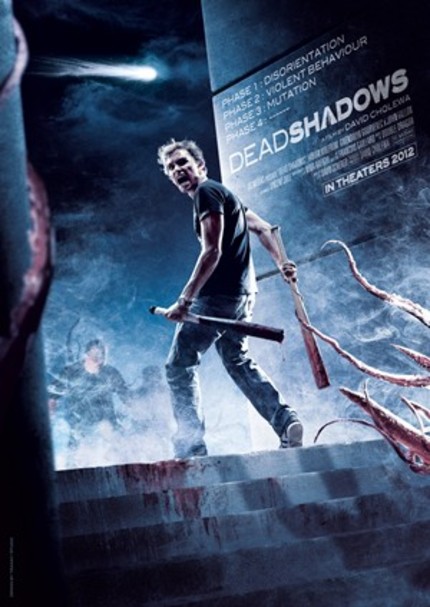 You don't want to know where the tentacle goes.

We've been keeping a close eye on the progress of David Cholewa's scifi-horror hybrid Dead Shadows here at ScreenAnarchy and today the full theatrical trailer for the film arrived online.

Dead Shadows tells the terrifying story about a young man, Chris, whose parents were brutally killed 11 years ago, on the same day that tHaley's Comet could be seen from earth.  Tonight, a new comet is going to appear and everyone in his building are getting ready for a party to celebrate the event. There's even an apocalypse theory going around. As the night falls, Chris starts to discover that people are acting strange - and it seems to somehow be connected to the comet. People are becoming disoriented and violent and it doesn't take long before they start mutating into something from beyond this world. In a fight for survival, Chris has to try to escape from his building with the help from some other tenants - but will they make it out alive?

Dead Shadows is looking to be one of the happy surprises of 2012, a film that has consistently looked better with every new piece of material that has been released. This one is going to screen at the Cannes Marche du Film, expect it to turn up on the festival circuit shortly thereafter.
Sign-In to Vote
Tweet 0 Submit

This is a vast improvement over the early trailer we had a few months ago. Now I'm pumped to see this.

Which can be fun. And when seen this way is the only way the cheesy digital effects could work

Love that last shot. Is that Cthulhu emerging or something? Sucker is huge!

Looks more creepy then I thought.....like an updated version of Night of the Creeps (1986).

So this is Night of the Comet meets Resident Evil 4/5?