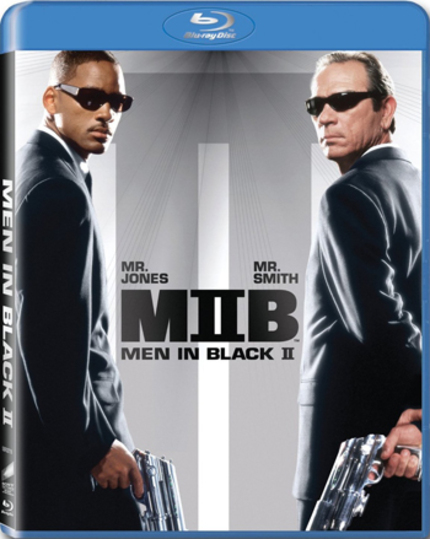 With Men In Black III on the horizon this summer, Sony has re-released the first film on Blu, while giving its 2002 sequel its first outing in the format. We're far enough away from both films (15 years and 10 years, respectively), that more likely than not, most of you reading this piece will likely have seen them and already calcified your opinions of both summer blockbusters. Even before watching them again for this review, my own assessment of the Barry Sonnefeld comedies was something along the lines of "Men In Black good, Men In Black II not so good." And yeah, that's essentially what you'll get out of this piece, and--spoilers--with the exception of some CG not really looking so hot with the move to hi-def, both movies look fantastic on the disc. But what struck me the most are two things: the vast gulf in quality making the biggest impression right off the bat. Men In Black, while not perfect, is a very focused, very funny sci-fi comedy. I'm not going to sit here and tell you that it's in the same ballpark as say, Ghostbusters, but maybe we can all agree that it's in the same league as far as this kind of thing goes (and it captures a very particular snapshot of New York when it was still funky).

In the first movie's commentary, Sonnefeld says that one of his aims with the first film was to take the comic book adaptation (based on the miniseries from Aircel, later picked up by publisher Malibu, then later still by Marvel), was to make a police procedural out of the material. I'm not familiar with the original books (although they sound a bit darker than what ended up on screen), but Sonnenfeld was able to get to the essence of his pitch: secret agents tasked with defending the earth from otherworldly threats.

Sonnenfeld is still able to maintain the macabre and the gruesome elements of the broad outline of the original story, and he's got three not-so-secret weapons in his arsenal here: Vince D'Onofrio's twitchy, snarly performance as a bug in a man's skin, Rick Baker's fantastic practical CG which gives the first film a real sense of texture and weight, and finally, Tommy Lee Jones, as the craggy, unflappable government man, K.

Now, this isn't some attempt to beat up on Will Smith, who does decent enough work here, and I'm sure he's the reason 99% of people go see these things and make them the big summer hits that they are. At the same time (and this allows me to segue into the second movie and my second point), the Men In Black films are at their most effective when Jones is onscreen, and the two films bear this out, I think.

Most of Smith's performance is that of the audience identification character, so it stands to reason that much of his Men In Black performance will revolve around his reactions to the intergalactic weirdness he's suddenly thrust into. So a little bit of Smith's mugging, screaming, and general "Smith-isms" can be forgiven (and even appreciated as a counterpoint to the droll non-reaction of Jones' character). But when II rolls around and for the first, let's say quarter, we're stuck with Smith only, it becomes a big, bright, red underline under everything about the movie. Neither film could be described as subtle, but with Smith constantly shrieking, screaming, scrambling, and complaining, the world established by the first film seems more artificial, in the second.

It also doesn't help that the wackiness factor (Johnny Knoxville's two-headed henchmen, Zed's karate kicks, the Ballchinian) is cranked up to 11, along with just the most odd product placement (howdy Burger King, what's up, Verizon), and distracting cameo appearances. The lack of Jones for long stretches and how in-your-face everything is about the movie makes me suspect that III might be headed in the same direction (if you haven't heard, Smith travels back in time). Honestly, I think we could all do with a little less of that (even if James Brolin is in it) and a lot more of what made the first movie work.

So many. I haven't compared the last Men In Black release to this one, but there's more than enough to keep fans of these movies busy for a while, with multiple commentaries on the first film (one featuring Jones and Sonnefeld in Mystery Science Theater-style outlines), extended scenes, a Magic 8-Ball-style gimmick called "Ask Frank" (the garrulous pug), and a Trivia game.

Men In Black II contains just the one commentary, along with an alternate ending (it's kind of cute, and actually avoids the retread of the first movie's ending that we got theatrically), plenty of making of docs, and a Will Smith music video.