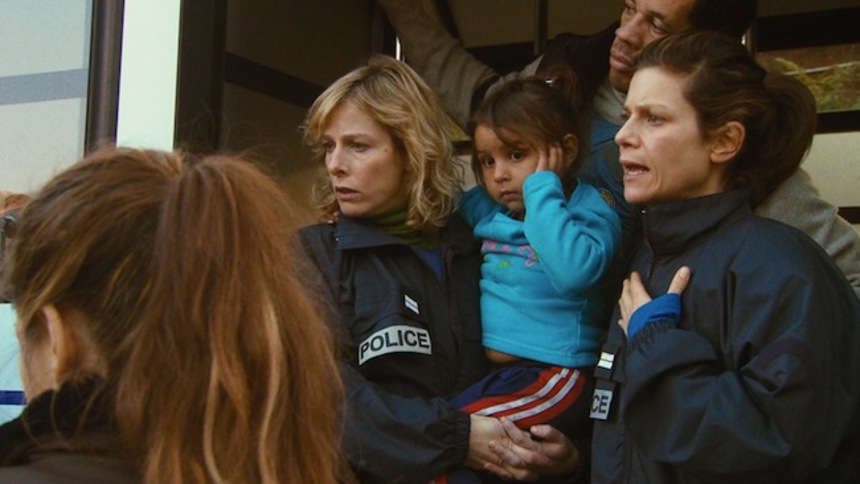 It's been over eight hours since I left the theater; eight hours after taking in the third film from filmmaker/actress Maïwenn, largely my first experience with her work. Polisse (a clever, simple, kid-inspired misspelling) is an in-depth and very intense look into the professional and personal lives of the police officers in the Child Protection Unit of Paris. Lives where lines between work and home are in fact very hard to draw. I've had the opportunity to let the film sink in, to discuss it with others, and yet I still can't bite the feeling that this is a film that is still well beyond my ability to review it. Yes, I was so floored by it; that taken with it...  I'm airing the laundry as it were (not quite dirty), but Polisse was such an undertaking as an audience member, that I feel a great approach to discussing the film in an effective way, perhaps the only way to handle it with the capacity to review intact, would be to do a roundtable style dialog with folks who had seen it. Well, my own selfish, perhaps even lazy way was not meant to be. I've got to go it alone, so I'm going to give this a try. And please forgive me if it ends up feeling like I lead you down a rabbit hole of half-thoughts, slack jawed metaphors and dunce-drawn descriptions.

Maïwenn's picture is an ensemble piece, bursting with unique characters and wonderful dynamics. It is a film comprised of many cases and no real overarching plots to speak of, yet it is less episodic, less of a highlights reel, stringing the best bits together from a TV season or mini-series, and more of a mosaic. And even then one must mention the sense of flow, the cadence in the editing, in absolute support of the acting, how a heated conversation continues without a second's stop, and yet we've jumped to another building, another couple or the next day. The key perhaps then in my unraveling of Polisse, in my desire to share with you something of the film is to not talk about it from the standpoints of subject matter and themes, political or cultural commentaries. It feels that to encapsulate the ebbs and flows of tension, of release, of pure fury, ecstasy and horror which our officers experience is best defined by -- of course -- the people and the moments.

There are perhaps no more two telling moments than the following: Over a backdrop of Playmobil Police toys and a dollhouse, the actors' first names appear all together on screen, hovering there a good few seconds before their last names fade in. And then: We're a good quarter into the film and the CPU has just dealt with a case that involved a mentally unstable mother stealing her baby. Upon a successful closing out, the unit, along with the photographer (played by Maïwenn) assigned to photograph the unit for a ministry book, goes out to a disco, and in a moment of much needed relief, they begin to dance. First it is Fred, played by the mesmerizing Joeystarr, and Frederic Pierrot's Balloo, the two elders of the group, who rouse their team into motion; into joy and laughter. The moment is so freeing, so refreshing for both us and them, that it almost seems absurd as they pop and lock, break dance or boogie. Like them, we may laugh at this, but it is because we need to; they need to bust a move on the dance floor, form a line, and clap, clap, clap. It's a magic moment, full of a fairy tale state of ecstasy and absolute camaraderie; it is of an effervescent freedom. And yet, they remember, and we recall...  there's no line that has been drawn. For whether it's a divorce, a pregnancy, interviewing another pedophile or busting a child pickpocket ring, there's no way to draw that line; this is it. We're all caught up in it ALL. These people are propelled by a passion that seems to be unrivaled.

While some of her own character's moments occasionally feel like the one skewed, slightly off part of the film , Maïwenn as a director has all but reinvented what we think of when we hear the words "police procedural". Perhaps then it is quite redundant to say the following: Polisse is a harrowing, sometimes even horrifying, often funny, and always engrossing piece of work that should not be missed.