Review: THE FIVE-YEAR ENGAGEMENT Stalls At The Altar 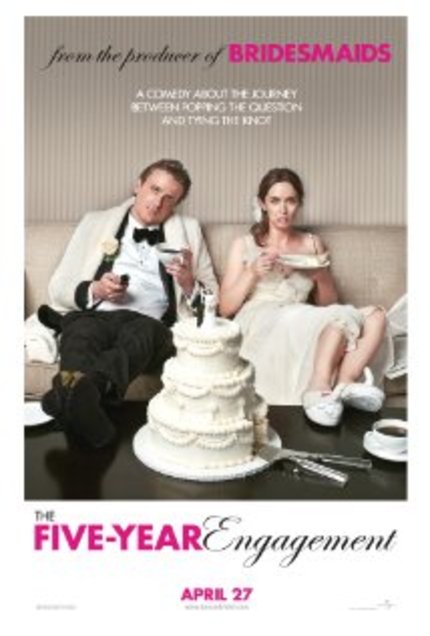 François Truffaut echoed Jean Renoir when he explained the virtues of filming reality, stating that there is nothing more magical to him than reality. Interesting sentiment, especially coming from Truffaut, but he obviously wasn't made to sit through THE FIVE-YEAR ENGAGEMENT, a Hollywood relationship drama disguised as a raunchy comedy that one sometimes gets the impression doesn't unfold in real time only because it can't.
You know the romantic comedy is in trouble when the venerable yet exhaustingly pandering escapist niche attempts to embrace "real life" as a calling card. In real life, we tend not to get the meet cutes, Hollywood wardrobes, or happy ever afters that play out on screen. Instead we have lifetimes of missed opportunities, sweatpants, and debilitating stagnation. Many would argue that that's exactly why we need romantic comedies, and to a point, they wouldn't be wrong. But with the rise of the modern "chick flick", Hollywood has managed to offset what was once a reliable staple of silver screen entertainment (think Cary Grant at his comedic best) into a flake-fest of cookie-cutter sameness - a perpetual insult to the audiences they target. THE FIVE-YEAR ENGAGEMENT, with it's angle of "starting where other rom coms end" (the engagement), attempts, to it's credit, to deviate from the mold. But by it's own ending, it wants to have its wedding cake and eat it, too.

Quickly rising stars Jason Segel (THE MUPPETS) and Emily Blunt (SALMON FISHING IN THE YEMEN) play Tom and Violet, a pair of canoodling young lovebirds out to marry one another, except that they can't seem to ever make that happen. He's a talented high-end sous chef who turns down the opportunity to be head chef at a new San Francisco restaurant when she gets her own academic career opportunity of a lifetime, which takes them to snow-capped Michigan (home of the really great filmmaking tax credits).

They've been engaged since the first minutes of the film, but life keeps getting in the way of a wedding. It isn't long before the years start piling up, their cohabitating life resembling an inert sea of blandness and pretending. In short, they're basically married, but without the rings, the paperwork, and the self-ascribed freedom to start a family. Maybe it's Ingmar Bergman's SCENES FROM A MARRIAGE without the marriage, and then poured through the filter of Judd Apatow's production company. Which might not be a bad thing, except that none of this decompressed real-life feet dragging matters a whole lot, seeing how the film sharply morphs into rom-com 101 territory by the end (and other moments throughout).

Director Nicholas Stoller (FORGETTING SARAH MARSHALL) reteams with Segel for this 124-minute teetering slog. It's not unwatchable, but in a two-plus hour comedy, there really ought to be some substantial laughs (as opposed to a sustained sea of mere chuckles). Segal is at his doughboy best, and Emily Blunt is radiant throughout, but they're given little opportunity to be truly funny together (or apart). This film could truly benefit from some good old-fashioned witty movie banter, but that isn't to be. I suspect that it's somewhere in between the desire to portray real human interaction and modern Hollywood's inability to write classic-style sharp verbal exchanges that we'd find the reason for all the flat talk in this film. (For solid, winning movie banter, look no further than the biggest release of next week, THE AVENGERS, which just happens to be a massively pre-sold action-adventure that doesn't even need it - but will keep it anyhow, thank you very much.)

Stoller presents Tom and Violet's would-be misadventures in flatly lit medium shots, cutting from one TV-friendly medium shot to another. This leaves no aesthetic reason to see THE FIVE-YEAR ENGAGEMENT in the theater. There's comedy to be mined in the notion of characters spinning their relationship wheels, but this one doesn't ever truly get there.

A few years ago, I managed to miss THE HANGOVER in the theater, and went on to regret it. Last year, I opted to skip BRIDESMAIDS, and consequently had to spend the rest of the year answering "no" to the question of if had I seen it. (I'd seen over one hundred other movies that year, but never mind those...!) So there was no way I was going to let myself miss this year's late spring/early summer raunchy comedy extravaganza. Based on that notion alone, I attended the early screening of THE FIVE-YEAR ENGAGEMENT. I saw no trailers or TV spots or anything ahead of time (which is actually not all that uncommon for me). So I was shocked - shocked! - when the film maintained the over-length of most any Judd Apatow production, but very few of the laughs. It doesn't otherwise resemble quality Apatow, or middling Truffaut for that matter. But I guess that's just life (with a Hollywood punch-up.)

Do you feel this content is inappropriate or infringes upon your rights? Click here to report it, or see our DMCA policy.
Nicholas StollerJason SegelEmily BluntChris PrattAlison BrieComedyRomance