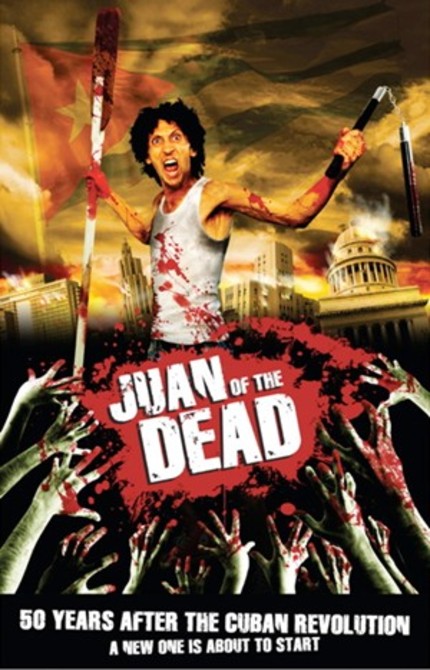 Dallas IFF presents Alejandro Brugues' Juan of the Dead as part of their Dark Side of Film series. I reviewed the film at Fantastic Fest, and am revisiting that review on this occasion. It's a winner!

There is certainly an argument to be made that the horror comedy has played itself out, however, every few years something fresh pokes its head out of the mire, and we all rejoice.  A few years ago it was Edgar Wright's Shaun of the Dead, before that, it was Peter Jackson's Dead Alive/Braindead, and before that it was Sam Raimi's Evil Dead 2: Dead by Dawn.  I realize that by putting Alejandro Bruges' Juan of the Dead in that kind of company, it is giving it a lot to live up to, but I was genuinely impressed on numerous levels, and I expect great things from this team in the future.

Cuban cinema is nearly as mysterious about everything else on the island. Very few Cuban films make it out, and the one's that do typically don't make much of a splash. Obstensibly this is because any state funded film (and most are) that leaves the island must be run by the powers that be in the still communist government.  In that sense, it is miraculous that Juan of the Dead has made it this far. The film does not shy away from politics, in fact, some of its messages may be a bit hackneyed in their overt nature, but it does give the film a cultural context that separates it from others of its ilk and truly is one of the strengths.

In Juan of the Dead, the title character is a shiftless petty thief, who has made bad decisions in his life that have led to the severing of many potentially very rewarding relationships, specifically one with his now grown daughter.  He does, however, have a heart, and as he approaches middle age, he becomes more and more aware of his role in the deterioration of his life. In an attempt to reconnect with the life he now wants, he attempts to restart his relationship with his daughter in a sequence that is heartbreaking, as she rebuffs his attempts, reminding him of his failures and the fact that their broken relationship is his fault, and not hers.  Juan is nothing if not determined, and his determination to make himself whole again is noble.  There's just one problem, the zombies.

Juan of the Dead is a survival horror film that knows what it is doing.  It hits all the right beats, and borrows liberally from other successful films, most notably those of Romero, but it also shares more than a little from Shaun of the Dead, and I noticed several references to others in the film, including an overt homage to Lucio Fulci's Zombie.  You could say that Juan's willingness to appropriate ideas from other films would be a weakness, but the director knows exactly what he is doing, and a number of crucial elements keep this from becoming a forgettable rip-off rather than a fresh take on the formula.

The cultural context of the film is outlined very clearly in every frame, and that is both an advantage and a disadvantage to the film.  As I mentioned above, Cuba is a place about which most Americans are poorly informed.  Bruges takes the time to set his scene early on, introducing us to his Havana.  His city is populated by myriad different types, mostly working class, and they bring a depth to the film that is necessary to make Juan of the Dead work. The director clearly takes great pride in Cuba as his home, but does not condone it's past, and does fear for it's future.  He pictures its residents as scraping for every peso, and he stands firmly against the current regime. The zombie as metaphor for the downtrodden is not subtle, but it is effective, and if there is any complaint to be made it is that the politics are perhaps a bit foreign to non Cuban audiences, and possibly alienating.  The film doesn't suffer from these digressions for long, though, and clearly has more than a political statement in mind.

During his introducion, Alejandro Bruges explained that his film was made for this audience, and he hit the nail on the head.  The film is filled with clever dialogue, plenty of solid gore, the blackest of black humor, and geek humor for miles.  There are very inventive zombie kills, including one in particular that involves a truck, a wire, and about three hundred of the undead that it really the piece de resistance of Juan of the Dead.  The film doesn't shy away from blood, guts, sex, bad attitudes, foul language, and all of the things that make films work at Fantastic Fest, and it is a success in its goal of creating a perfect Fantastic Fest film.

Juan of the Dead boasts a number of surprises for the viewer adventurous enough to give it a shot.  First of all, the production value is top notch.  After having seen the initial short that was shown to investors, and that we hosted here on ScreenAnarchy, I was expecting to see something very low budget and sparse.  The finished film, however, is very finished, and it looks wonderful.  The effects are all exceptional, the cinematography is inventive and beautiful, and the script is wonderfull wry and funny.  In short, Alejandro Bruges made a real movie, one that anyone can watch without having to modulate expectations like we sometimes do for films coming from less developed territories.

Perhaps the greatest surprise that Juan of the Dead has to offer is heart.  This is where the politics come in.  I won't share specifics, but this film is about people, normal people, who just happen to be fighting zombies to save their own lives.  In that regard it is very similar to Shaun of the Dead, and in fact it cribs a couple of scenes almost directly from that film, however I would argue that Juan of the Dead makes a deeper emotional commection with the viewer than Wright's film. The fact that it takes the time to build characters with real emotions in the midst of the explosions, gut-munching, and other insane action is encouraging, and really works to its benefit.

Juan of the Dead is the surprise of Fantastic Fest for me so far. Polished and heartfelt, Juan brings a new voice in genre filmmaking from a land hamstrung by politics for decades.  Maybe if we're lucky, this film will usher in a new renaissance of Cuban filmmakers making genre films.  Alejandro Bruges' film deserves to enjoy a theatrical release here in this country, and I sincerely hope that it finds a home.