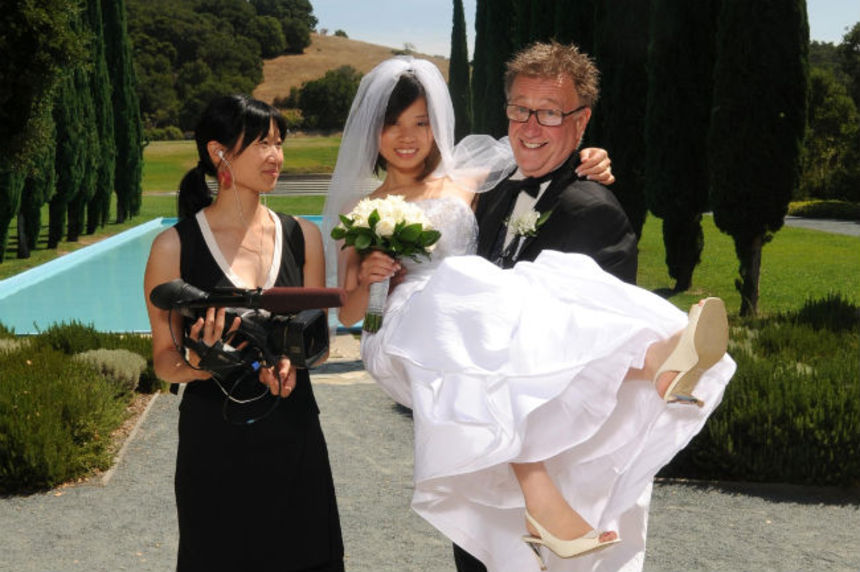 A documentary that becomes progressively more fascinating as it develops, Seeking Asian Female digs far beyond what its cringe-inducing title might imply.

Filmmaker Debbie Lum, herself a Chinese-American woman, explains in her voice-over narration that the phenomena of Caucasian men who are attracted to Asian women purely on the basis of race is widespread, especially in California,. She decided to investigate, and the result surprised her as much as it will the audience.

She reached out to men on dating or friendship sites who specified "seeking Asian female" or similar, and thus came across Steven, a 60-year-old single man who is unusually open about his life. Fortunately, it's not for annoying, attention-hungry reasons, like so many participants on reality shows, but, more basically, because Steven has a very open personality, and appears to have no filter between what he thinks and what he says, as Lum notes.

Steven looks and sounds like the worst stereotype imaginable: a clueless Caucasian suffering from an extended bout of "yellow fever," pursuing women solely because they're Asian. He's had Asian girlfriends in the past, and is attracted to what he perceives to be their (stereotypical) qualities: humble, modest, quiet, submissive, all qualities that he thinks will make him a good wife.

Amazingly, he's made contact with a 30-year-old single woman in China named Jian-hua (AKA "Sandy") who has agreed to marry her, even though they've never met. Steven travels to China and comes home with her; she has a three-month engagement visa, during which time she must marry or return home.

Lum openly expresses her astonishment and disbelief that Sandy could possibly be genuine. She barely speaks any English, and Steven knows only a few expressions in Chinese. How could this possibly work?

Lum is aware that she is being drawn more and more onto questionable grounds as a documentary filmmaker. It's a step-by-step process, and Lum wonders how much responsibility she bears for what happens between Steven and Sandy, for good or for bad.

The fascination rests with the extremely open nature of the relationship between Steven, Sandy, and Debbie. How much rope will Lum, the filmmaker, give to Debbie, the increasingly close friend of Steven and Sandy?

However questionable, Lum's presence and closeness with her interview subjects also means that she is present for some extremely uncomfortable and intimate discussions -- OK, arguments -- between the couple, especially as the wedding day approaches. At the same time, that allows for more understanding of Steven and Sandy as individuals, especially Sandy's frustration that Steven has no knowledge of Chinese culture. The culture clash becomes more glaring when Steven's past relationship with another woman raises its ugly head.

All in all, Seeking Asian Female proves to be utterly compelling viewing, openly raising questions about men, women, love, romance, commitment, and cultures, as well as dealing with issues that are specific to documentary filmmakers. It's a funny, warm, worthwhile experience.